Why Is Crocs Acquiring Hey Dude? 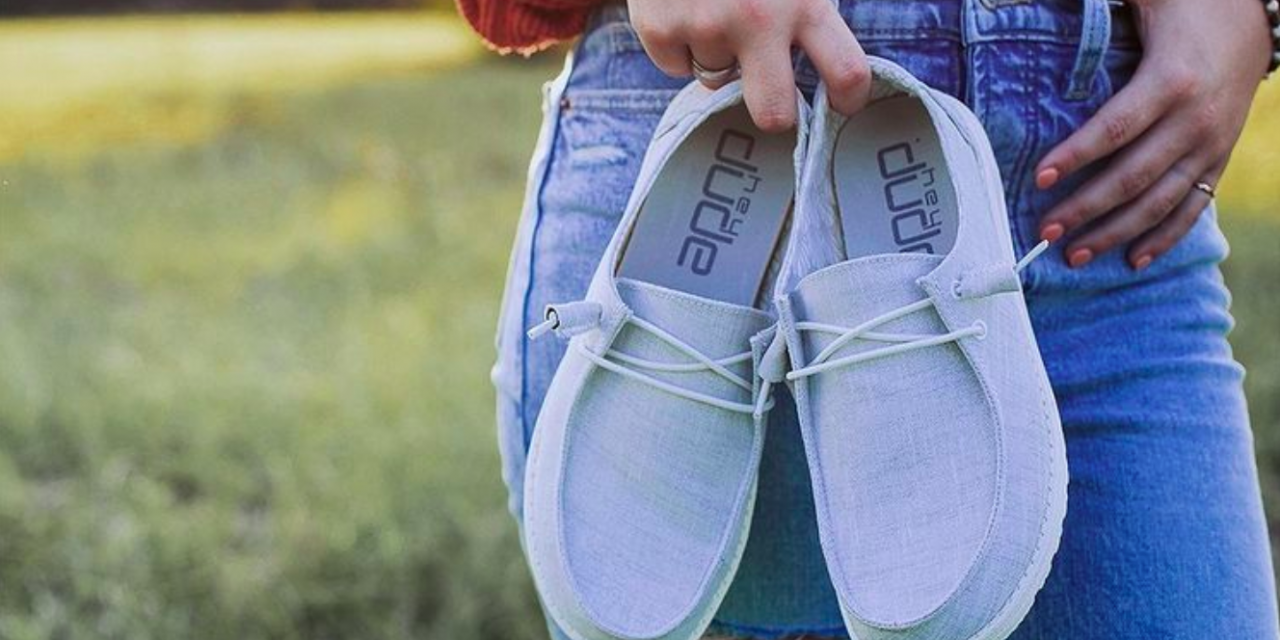 Shares declined $16.25 last Thursday to $123.53. Crocs’ stock has been on a strong run as comfortable footwear has been in high demand during the pandemic. Crocs started 2021 at $62.66. The shares decline was attributed to little investor knowledge of Hey Dude, the higher debt leverage as a result of the deal, and Crocs’ management declining to confirm fourth-quarter guidance.

CROX prevailed in a competitive bidding process for Hey Dude, which was founded in Italy in 2008 and offers a line of comfort/casual footwear and accessories to men and women. The gender mix is split between men and women.

Hey Dude’s revenue grew more than two times in 2021 despite supply constraints and is expected to reach $570 million for the year. For 2022, Crocs projected Hey Dude’s revenue to reach between $700 to $750 million, which represents a growth of 23-to-32 percent. On a longer-term basis, revenue is expected to grow over 20 percent per annum and operating margins to exceed 26 percent.

Hey Dude will operate as a standalone division. Alessandro Rosano, founder of Hey Dude, will continue to lead product development as a strategic advisor and creative director while Rick Blackshaw joins Hey Dude as EVP and brand president. Blackshaw most recently served as the CEO at CCM Hockey and previously held positions as the president of Sperry, president of Keds, and vice president/general manager of the Chuck Taylor division of Converse. Blackshaw will be a member of the Crocs’ executive team.

The purchase price of $2.5 billion is expected to be funded by $2.05 billion in cash and $450 million in Crocs shares issued to Rosano. Crocs expects to enter into a $2 billion term loan B facility and borrow $50 million under the company’s existing senior revolving credit facility to fund the cash consideration. The transaction is expected to close in the first quarter.

Analysts Take
One believer in the Hey Dude acquisition is Piper Sandler’s Erinn Murphy, who has been following Hey Dude’s progress as part of Piper Sandler’s bi-annual “Taking Stock With Teens” survey.

In a note, Murphy described Hey Dude as “one of fastest rising brands we’ve seen to date in our survey.”

Hey Dude ranked as the number eight in its Teen Survey this fall versus 17 in fall 2020 and 54 in fall 2019. She wrote, “The brand ranking is balanced between males & females. We have built out a profile of who the Hey Dude consumer is – they shop heavily on Amazon, cross-shop for apparel at The Buckle, Columbia & American Eagle for apparel & are dominant in the Midwest & South.”

She noted that with sales expected to reach $570 million in 2021, Hey Dude is about the size of Crocs in the Americas in 2018. She also said profitability is “strong” with her team estimating $200 million in EBITDA this year.

Murphy believes shares were “mispriced” on the news due to concerns arriving as investors are unfamiliar with the brand and have related concerns about its growth sustainability. She suspected some investors wished Crocs’ management had reiterated guidance on the call.

Murphy believes Crocs’ quarter-to-date performance is “incredibly strong” and she expects Crocs will again be able to beat guidance. She added, “We think is an opportune time to be accumulating the stock – particularly against an accretive deal that could add >$1/share in FY22.” Piper Sandler has an “Outperform” rating at a price target of $215.

At B. Riley Securities, Susan Anderson reiterated her “Buy” rating at a $174 price target. Anderson wrote in a note, “We remain buyers of CROX particularly on today’s weakness as we continue to see [double-digit] growth over the next several years as demand for their classic clog styles remains strong, sandals are bearing fruit, and we now estimate $1.00/share in accretion to FY22 EPS due to the Hey Dude acquisition.”

At Stifel, Jim Duffy, who has a “Hold” rating at a $157 price target, said the acquisition adds another “fast-growing, high-momentum, U.S.-centric casual footwear business” to Crocs. Duffy wrote, “Crocs management has proven adept at scaling a digitally-centric youthful casual footwear brand, and we see strategic and platform synergies to growth and margin.”

He also said the deal brings “added versatility and diversifying CROX beyond dependence on the clog silhouette.” At approximately 15 times EBITDA, the transaction is slightly EV/EBITDA dilutive but accretive to growth, margin, and earnings, according to Stifel’s analysis.

RW Baird reiterated its “Outperform” rating at a $250 price target. Analyst Jonathan Komp wrote in a note, “We like (don’t love) the deal, but believe the substantial long-term prospects outweigh near-term risks with shares remaining highly attractive at only ~10X prospective 2023E EPS.”

He likewise called out the benefits from Crocs diversifying its product mix and addressing the broader casual footwear opportunity through a multi-brand platform. Beyond any back-office synergies, Komp expects Hey Dude to benefit from Crocs’ ability to tap collaborations, influencers and social media to build brand exposure for Hey Dude.

Regarding the initial negative reaction by investors, Komp believes that partly reflects the “incremental complexity” around Crocs that had been viewed as a “mono-brand operator” with a recent goal set to reach $5 billion by 2026. Komp wrote, “We see substantial upside if CROX can prove consistent execution.”

At Williams Trading analyst Sam Poser wrote in a note that while few investors apparently knew about the Hey Dude brand, “many retailers, such as Hibbett, Shoe Carnival and others have not been able to keep Hey Dude product in stock for at least the last 18 months, and the brand continues to gain momentum. As such, we are confident, as we have been and with Crocs, that retailers are more knowledgeable of trends than the very large majority of the investment community is. Crocs trends remain strong, and management remains confident that sales will reach $5B by 2026. Further, CROX management will be meeting with investors at the ICR Conference in January, will likely preannounce 4Q21 results, and update the 2022 outlook, all of which will act as positives for the stock.”