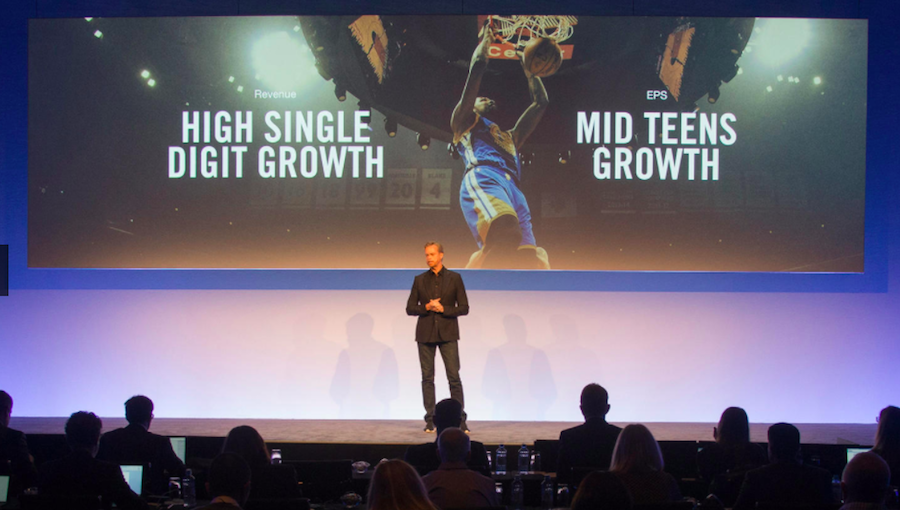 Wall Street generally applauded Nike’s plans to ramp up its commitment to innovation and build digital connections spelled out at its Investor Day event last week, but a few were looking for greater insights into near-term trends, especially visibility into when the North America region may recover.

Among the projections Nike officials gave at the event held last Wednesday:

Robert Drbul of Guggenheim (Rating “Buy,” Price Target $68) wrote in a note to clients that Nike’s management at the meeting “articulated a thoughtful strategy with plans that seem lofty, but achievable.”

Drbul expects that growth in the years ahead will be “amplified by digital,” with the company’s focus on adding Nike Plus members and the Nike app members spending three times more than nike.com non-members.

He also cited Nike’s momentum in many overseas regions while asserting innovation remains the “key to Nike’s success.” The brand has a “robust pipeline” of products set to launch over the next 12 to 24 months, including Russell Westbrook’s first signature shoe and a lower-priced self-lacing performance basketball shoe.

He also expects that a return to strong gross margin expansion is achievable given faster growth in the higher-margin Nike direct channel, its doubling spend on innovation to lift demand, product cost initiatives and a focus on stronger, more consistent full-price sell-through. Wrote Drubul, “Nike targets 65 percent in season full-price sell-through and we would highlight every 1 percent annual increase could deliver $100 million in margin benefit per Nike estimates.”

At Susquehanna Financial Group, Sam Poser raised his price target from $47 to $50 but kept his “Neutral” rating.

Poser described the meeting as “better than expected” and was encouraged by the focus on major cities and commitment to integrating technology across its supply chain, apps and stores. Poser wrote, “We credit NKE for laying out very detailed plans to introduce innovation at a faster pace, markedly improve on already exceptional processes and deepen its connections with consumers.”

He also said the international growth targets appear “very achievable.” However, Poser in a note to clients said a turnaround in the U.S., which accounts for 45 percent of Nike’s sales, is “critical.”

The inventory overhang in North America remains a near-term concern and “re-establishing a pull model, while scaling the most successful platforms (particularly in lifestyle product) without damaging the cachet of those platforms will be a tall task,” he wrote.

Poser added, “We need to see clear evidence that North America is on a better path before becoming constructive.”

Lindsay Drucker Mann, at Goldman Sachs (Rating “Neutral,” Price Target $54) said the five-year plan “looks credible to us, but there was little in the presentation that gave clarity on the one to two year path in the face of brick and mortar channel disruption.”

For instance, Drucker Mann noted that Nike declined to give medium-term growth targets for North America, “which does nothing to clear up the lack of visibility we have to this market turning around in the next several quarters.”

On the positive side, she noted that management committed to reinstating MAP in January, “which points to a much healthier inventory backdrop.” However, she said Nike’s move to reduce its mix of “undifferentiated retail” was given “without much detail on how to manage that shift in an orderly manner, avoiding disruption from liquidations and going out of business sales.”

Duffy wrote in a note, “Within this structure, the next leg of shareholder value creation will be led by stronger consumer connections, an accelerated pace of product innovation, and a faster supply chain that is more responsive to consumer demand.”

He did note that the shift away from undifferentiated wholesale partners “will be a delicate (and potentially lumpy) transition, though we support the strategic path to a higher ROIC model.” He further noted that the shift to more of a global and DTC focus challenges some metrics, including futures and U.S. wholesale channel feedback, that in the past provided insights into Nike’s performance.” Duffy added, however, “But the end game is a more compelling economic model.”

Matthew McClintock at Barclays (Rating “Overweight,” Price Target $65) said Nike’s Investor Day “represented a meaningful inflection in tone from management, and we came away incrementally bullish on the longer-term story: Rather than focusing primarily on future initiatives at a macro level, Nike management instead took a detailed approach towards current capabilities and innovative products that have yet to scale.”

Nike highlighted a number of cushioning and fabric advancements at the event and particularly talked up opportunities to leverage React, Zoom X and Nike Air into other categories. Wrote McClintock in a note to clients, “We believe both the innovative products and technological capabilities unveiled were impressive and are more likely than not to deliver a return.”

McClintock added that Nike’s international growth rate “should naturally accelerate” given its past success and applauded Nike’s move to shift away from undifferentiated wholesale digital and store partners. The analyst wrote, “Nike appears to be proactive in addressing the disruptive retail environment with what we consider to be a realistic and thoughtful plan that addresses changing consumer behavior.”

Regardless, McClintock said Nike’s stock will “likely to remain a show-me story until fundamental results begin to accelerate, which appears a spring 2018 story at the earliest.” 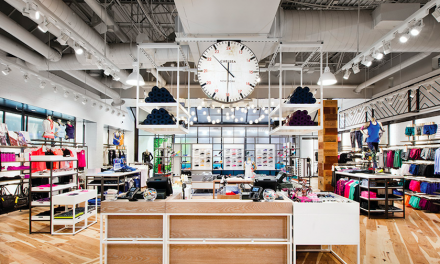