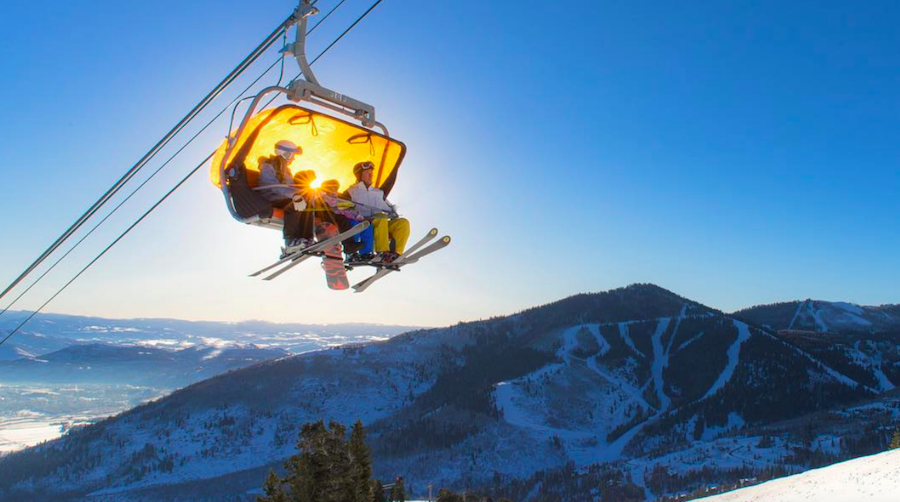 The company issued its fiscal 2019 guidance range and expects Resort Reported EBITDA to be between $718 million and $750 million, including approximately $11 million of acquisition and integration related expenses for the previously announced acquisitions of Stevens Pass, Triple Peaks and Stowe.

Commenting on the company’s fiscal 2018 results, Rob Katz, chief executive officer, said, “We are very pleased to complete fiscal 2018 with Resort Reported EBITDA growth from the prior year, despite the very challenging conditions in the western U.S. this past winter. This year’s results highlight the positive impact of our expanding geographic diversification, the stability provided by our growing season pass program and the success of our guest-focused marketing efforts. Our western U.S. destination resorts experienced modest visitation declines compared to the prior year due to the historically poor conditions, particularly for the first half of the season. However, revenue at our western U.S. resorts was in line with prior year performance due to season pass sales and yield growth. Whistler Blackcomb had another record-breaking year, growing from an exceptional fiscal 2017 as the resort benefited from excellent conditions throughout the season, currency favorability that attracted guests from the U.S. and around the world and the first season of full integration with Vail Resorts. At Perisher, fiscal 2018 results were strong with double-digit revenue and EBITDA growth compared to the prior year, driven by a strong finish to the 2017 Australian ski season and a strong start to the current 2018 Australian ski season, supported by pass sales momentum, which was positively impacted in part by the new pass partnership with Hakuba Valley in Japan.”

Katz added, “With a strong base of high-end consumers, we are continuing to leverage our growing network of resorts and sophisticated marketing and yield strategies to drive guest spending across our Mountain segment. For fiscal 2018, total Mountain net revenue increased 6.9 percent to approximately $1.7 billion. Total skier visits, including results from Stowe in fiscal 2018, increased 2.5 percent, primarily as a result of the inclusion of Stowe, which was acquired in June 2017, offset by the poor conditions at our western U.S. resorts during the first half of the 2017/2018 ski season. Total Effective Ticket Price (“ETP”) increased 5.0 percent, driven by season pass and lift ticket price increases across our resorts, as well as lower visitation per pass. Our ancillary businesses also experienced growth, with ski school, dining and retail/rental revenue up 6.8 percent, 7.2 percent and 1.0 percent, respectively, compared to the prior year, primarily driven by the addition of results at Stowe. Our U.S. Epic Discovery business continues to grow and generate strong financial returns on the capital we invested. However, Epic Discovery has not yet reached full maturity on profitability as quickly as we had originally planned. With each summer season, we continue to learn more about our guests, improve operational consistency and refine our pricing, product and promotion strategy to take advantage of the high levels of summer visitation which already exists at these resort locations.”

Turning to Real Estate, Katz commented, “We generated $0.1 million of Net Real Estate Cash Flow in fiscal 2018. During fiscal 2018, we closed on the sale of a land parcel at Keystone for $3.0 million and contributed $4.3 million to the Town of Vail related to a parking development. As of July 31, 2018, we had approximately $99.4 million of real estate held for sale and investment associated with land parcels at our resorts.”

Katz continued, “Our balance sheet continues to be very strong. We ended the fiscal year with $178.1 million of cash on hand, $130.0 million of borrowings under the revolver portion of our senior credit facility and total long-term debt, net (including long-term debt due within one year) of approximately $1.3 billion. As of July 31, 2018, we had available borrowing capacity under the revolver component of our Vail Holdings, Inc. credit facility of $185.1 million. In addition, we had $164.6 million available under the revolver component of our Whistler Blackcomb credit facility. Our Net Debt was 1.8 times trailing twelve months Total Reported EBITDA, which includes $334.5 million of long-term capital lease obligations associated with the Canyons transaction. On August 15, 2018, the company entered into an amendment agreement to amend and restate in its entirety the senior credit facility. The amended agreement provides for a revolving loan facility in an aggregate principal amount of $400.0 million and a term loan facility in an aggregate principal amount of $950.0 million, increased from the previous term loan facility of $684.4 million as of July 31, 2018. The company borrowed $70.0 million on August 15, 2018, primarily to fund the Stevens Pass acquisition and on September 27, 2018, the company borrowed an additional $195.6 million, primarily to fund the Triple Peaks acquisition. I am also very pleased to announce that our Board of Directors has declared a quarterly cash dividend on Vail Resorts’ common stock. The quarterly dividend will be $1.47 per share of common stock and will be payable on October 26, 2018 to shareholders of record on October 9, 2018.”

On August 15, 2018, the company announced the closing of the Stevens Pass acquisition. The final purchase price, after adjustments, was approximately $64.0 million.

On September 27, 2018, the company announced the closing of the Triple Peaks acquisition. Triple Peaks is the parent company of Okemo Mountain Resort in Vermont, Mount Sunapee Resort in New Hampshire and Crested Butte Mountain Resort in Colorado. The company purchased Triple Peaks for a final purchase price of approximately $74 million after adjustments for certain agreed-upon terms. As part of the transaction and with funds provided by Vail Resorts, Triple Peaks paid off $155 million in leases that all three resorts had with Ski Resort Holdings, LLC, an affiliate of Oz Real Estate. The 2018/2019 Epic Pass, Epic Local Pass and Military Epic Pass now include unlimited and unrestricted access to Okemo Mountain Resort, Mount Sunapee Resort and Crested Butte Mountain Resort; the Epic 7 Day and the Epic 4 Day now offer up to seven and four unrestricted days, respectively.

Katz continued, “We experienced strong growth in our season pass sales across nearly all products and geographies, including continued strong growth in destination markets, which drove over half of the unit growth. We also saw very strong growth in the local Whistler Blackcomb market and continued growth in the Colorado and Tahoe markets. We believe this growth continues to be driven by our increasingly sophisticated and data-driven targeted marketing efforts to move destination guests into our season pass products as well as the strategic long-term pass partnerships and acquisitions we have announced that continue to expand our resort network and make the network incrementally more compelling to skiers worldwide. Our growth was also positively impacted by the significant success of sales of our new Military Epic Pass. The vast majority of Military Epic Passes were sold to guests that were not previously season pass purchasers, and over half of the Military Epic Pass purchasers were not previously in our guest database. While the Military Epic Pass has a price that is much lower than our other season pass products, we are seeing significant incremental revenue for the program that far exceeds any loss of revenue from prior year pass holders who purchased a Military Epic Pass for this year. Furthermore, we are helping to introduce our sport to, and create much higher engagement for, the men and women who have served their countries in the armed forces and their immediate families. While in December 2017 our reported season pass growth rates were materially below the rates reported in September 2017; we expect our December 2018 season pass growth rates to be relatively consistent with our September 2018 growth rates.”

Katz concluded, “Our Epic Australia Pass sales are off to a very strong start with growth of approximately 20 percent in units and approximately 23 percent in sales dollars through September 23, 2018 compared to the prior year period ending September 24, 2017. The Epic Australia Pass continues to be a very compelling product for our Australian guests who can ski locally at Perisher, experience our growing network in North America and, for the first time, ski at Hakuba Valley in Japan through our new long-term partnership. Pass sales will continue through the Australian off-season leading up to the 2019 season.”

Commenting on guidance for fiscal 2019, Katz said, “Net income attributable to Vail Resorts, Inc. is expected to be between $288 million and $335 million in fiscal 2019. Our guidance includes an estimated benefit between $32 million and $40 million from the reduction of our U.S. federal tax rate from 35 percent to 21 percent as a result of the U.S. Tax Reform. We estimate Resort Reported EBITDA for fiscal 2019 will be between $718 million and $750 million. Our Resort Reported EBITDA guidance includes the operating results for Stevens Pass, Okemo, Mount Sunapee and Crested Butte from the date of acquisition and also includes approximately $11 million of anticipated acquisition and integration related expenses. Apart from our normal business drivers, our guidance for fiscal 2019 includes the following additional assumptions: (i) a full rebound in our performance in our second fiscal quarter, as compared to fiscal 2018, from assumed normal conditions throughout the period; (ii) a negative impact to our fiscal 2019 third quarter from the late Easter holiday (which is on April 21, 2019); (iii) $15 million of incremental expense related to above normal increases in labor costs, due to increasing our minimum wage by over $1 per hour at most resorts and other significant investments in compensation, all implemented due to both local market wage pressure and the benefits the company received from U.S. Tax Reform and (iv) a $6 million negative Resort Reported EBITDA impact from assumed lower rates for the Australian and Canadian dollars versus the average rates in fiscal 2018. We expect Resort EBITDA Margin to be approximately 31.5 percent in fiscal 2019 using the midpoint of the guidance range. This is an estimated 80 basis point increase over fiscal 2018. We estimate fiscal 2019 Real Estate Reported EBITDA to be between negative $3 million and $3 million. Fiscal 2019 guidance does not include any payroll tax impacts or income tax benefits related to the potential exercise of CEO stock appreciation awards.” 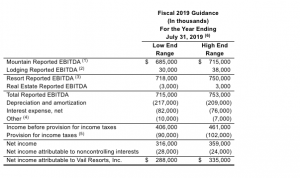 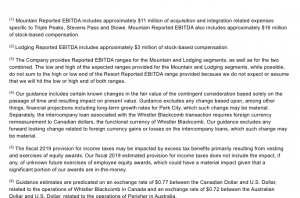