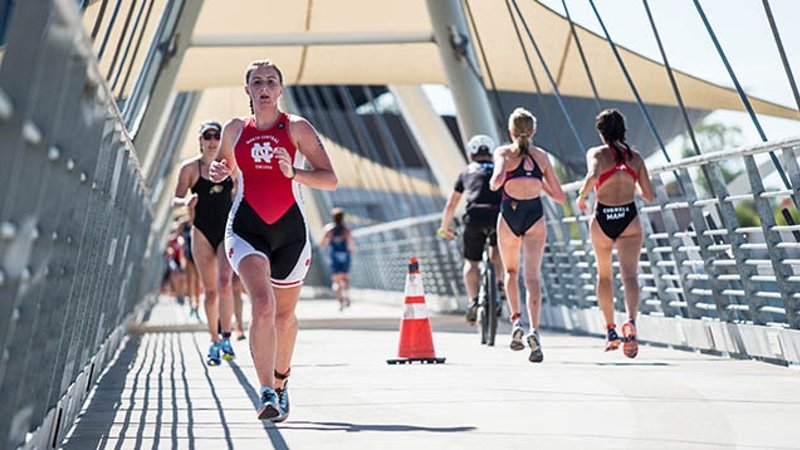 USA Triathlon, along with Karlton Creech, University of Denver (DU) vice chancellor for athletics, recreation and Ritchie Center operations, announced that the University of Denver will add women’s triathlon to its varsity sport offerings. The school is the 37th in the nation, the second in Colorado and the ninth at the NCAA Division I level to add the sport.

DU joins Colorado Mesa University (Grand Junction, CO, DII) as the only schools in Colorado to offer varsity women’s triathlon. The inaugural team will begin competition in the fall 2020 season.

“On behalf of the University of Denver, we are excited to add the sport of women’s triathlon to our fall lineup,” Creech said. “The USA Triathlon Foundation grant, and grants like it, provide excellent opportunities for colleges and universities to sponsor emerging women’s sports across the country. This addition will help us attract new students from across the country as our coursework, our campus and the Rocky Mountain backdrop provide future Denver triathletes with the opportunity to pursue success at the highest level in the classroom and in competition.”

“The addition of the University of Denver to the women’s collegiate triathlon family is groundbreaking for several reasons,” said Rocky Harris, USA Triathlon CEO. “Colorado is one of the nation’s thriving triathlon hubs. With DU’s prestigious academic reputation, and as the first Division I program in the state to add the sport, the school is sure to attract top student-athletes and become a force on the national stage.”

Barbara Perkins, assistant coach of the men’s and women’s swim teams at DU, has been named the program’s first head coach. Perkins is an accomplished triathlete, finishing the 2019 season ranked 30th in the world and ninth in the U.S. for her age group in Ironman’s All-World Rankings. The former Air Force assistant is a two-time Ironman World Championship finisher and six-time Ironman 70.3 World Championship qualifier.

“I am extremely excited for women’s triathlon to find a new home at the University of Denver,” Perkins said. “With my background in coaching swimming at the DI level as well as my racing experience as an elite triathlete myself, I am confident that I am the right person to get this program started and feel beyond fortunate to have been selected for the position. Triathlon is an emerging sport and is giving young women new opportunities to compete at the collegiate level. I am thrilled that Denver has the opportunity to be a part of the process to continue to grow this sport.”

“Denver is the absolute perfect place for the sport of triathlon,” Perkins said. “Our facilities include a 50-meter Olympic-sized swimming pool, treadmills and space for a smart bike trainer studio, Washington Park is less than a mile away from campus and is the ideal set up for closed-circuit bike rides, runs or brick workouts, and we are 15 minutes away from a multitude of rides in the mountains. We have so many resources at our fingertips including the home of USA Triathlon and the U.S. Olympic & Paralympic Training Center just down the road in Colorado Springs. Colorado is the home to many of the world’s best professional triathletes and will serve as a great jumping-off point to the future of our sport. The future is bright for triathlon at the University of Denver, and we can’t wait to get started this fall.”

The NCAA named triathlon an Emerging Sport for Women in 2014, a designation that gives USA Triathlon a 10-year window to demonstrate the sport’s sustainability at the NCAA level by recruiting at least 40 varsity programs. The governing body is quickly approaching that goal with momentum on its side, as 28 schools have added the sport since January of 2017, and 36 schools have done so since 2014.