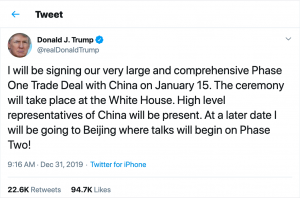 President Donald Trump said he would sign the “Phase One Trade Deal” with China at the White House on January 15.

In a tweet on December 31, the president said “high-level representatives of China” will attend the signing. The President said he would travel to Beijing “at a later date” to start talks toward a second part of the trade agreement.

Under the proposed deal, tariffs on $156 billion in Chinese imports — primarily consumer goods such as toys, clothes and electronics — that were set to be imposed on December 15 were delayed. Those tariffs would have taxed virtually everything China sells to the U.S.