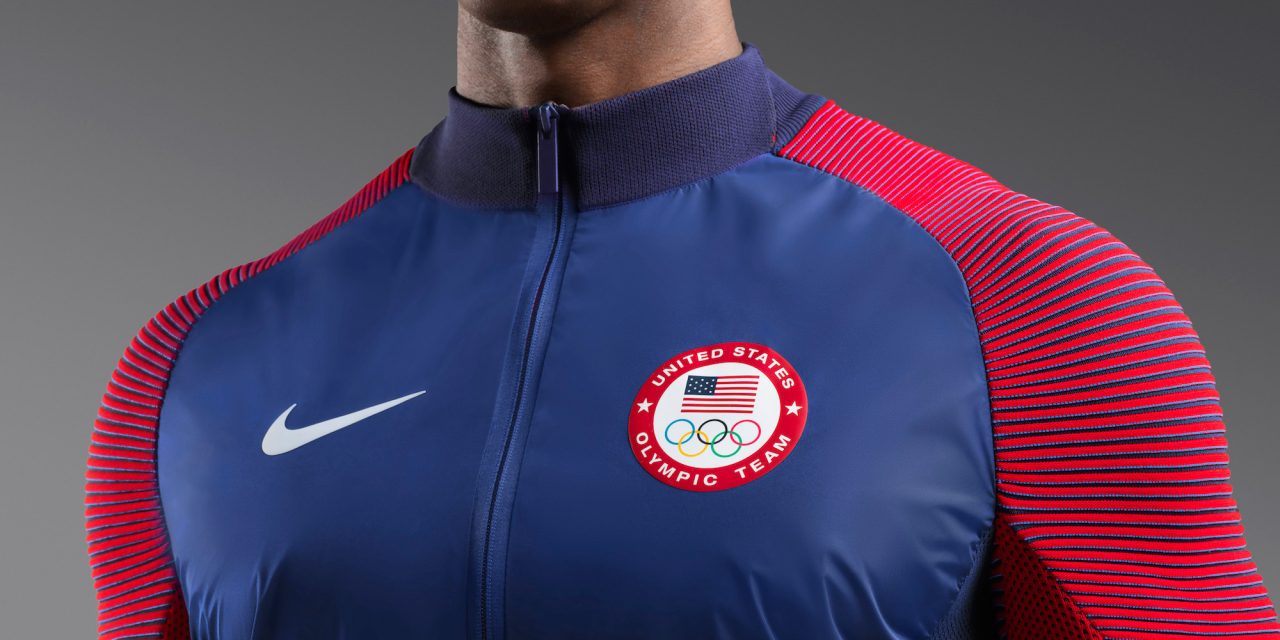 Team SGB is binge watching the 2016 Olympic Games this week … not only for the athletes and great competition but also to scope out which active lifestyle brands are gaining attention on primetime television.

Yesterday, we talked about some of the lesser-known brands making a splash at the Games’ swimming events. Today, we turn to some of the big boys — Nike and Under Armour.

Nike Medal Ceremony Jacket
No doubt about it: Nike is all over the Olympics and we’ll see even more of the swoosh next week during track and field. But in this first week, it’s the Nike Team USA Medal Cermony Jacket that caught our eyes and others on social media.

The loudest feature on the Revel Jacket is its ribbed knit sleeves, which add a striking texture alongside the smooth body. When the ribbing stretches, the color arrangement mimics a striped print (red and blue for Team USA and yellow and blue for Team Brazil). Used for breathability and flexibility, the strategic ribbing creates a pattern on its own. 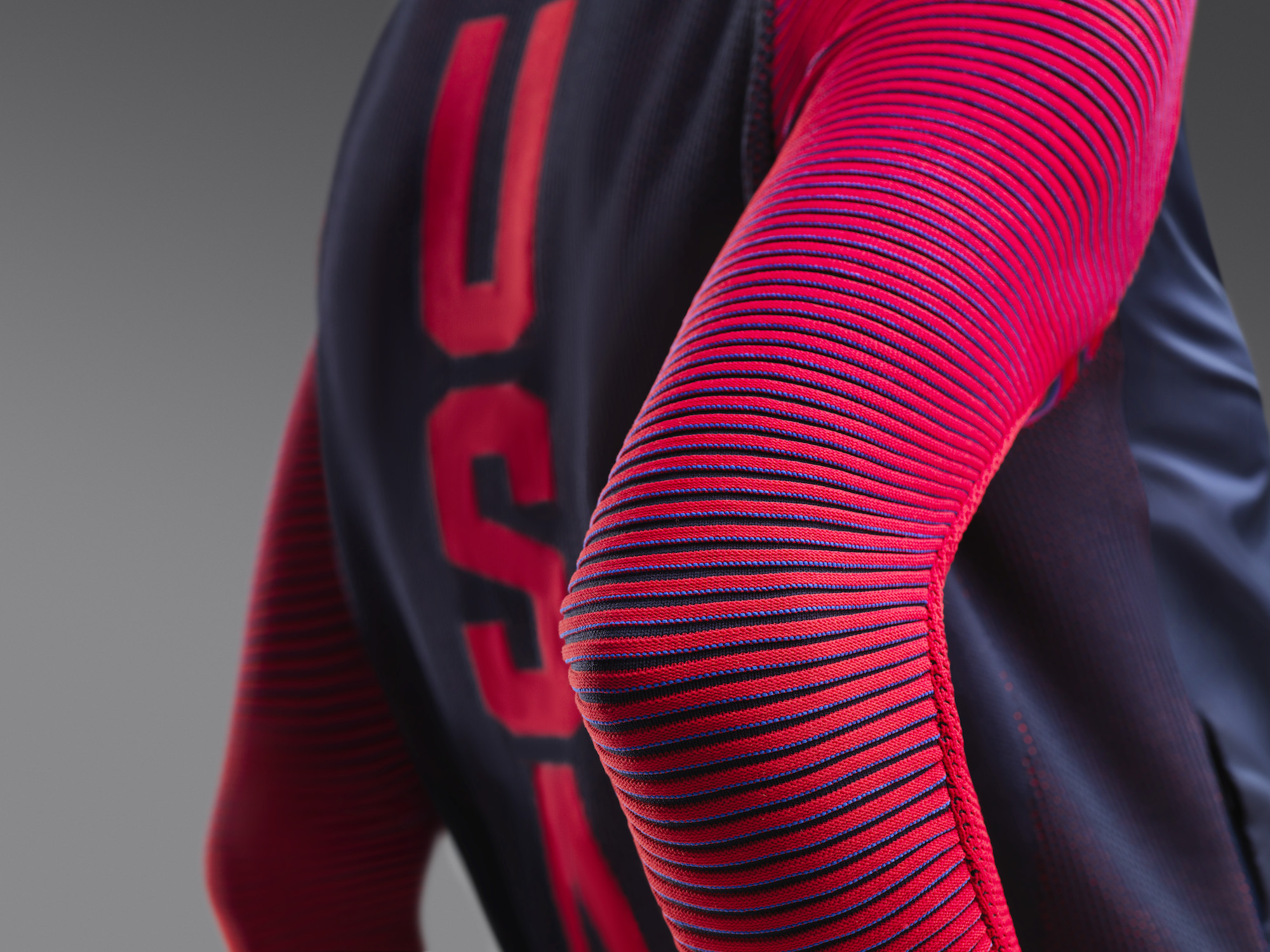 More performance is packed in the wind-resistant woven front panel, with mesh paneling on the back and sides. The silhouette is contemporary and simple, especially compared to the windbreaker parachutes of yore. In fact, the slick design of the Revel Jacket is another ode to the new era of high-fashion, understated sportswear. This also means bye-bye to iridescent chromes, a la the 2012 Nike Olympic Team USA jacket.

While a quick search on social media doesn’t show a huge reaction to the jacket yet, there are definitely more consumers lusting for it, albeit scoffing at its $300-$450 price tag. 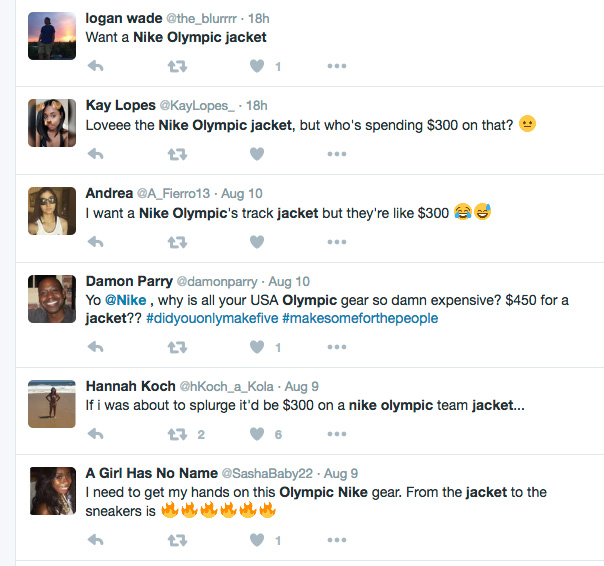 Under Armour’s $1,200 Sparkles
In the 1930s, Team USA gymnasts wore plain white rompers to compete in the Olympic Games. The Washington Post reported that the uniforms didn’t have an inch of Spandex in them.

Fast forward to the 2016 Rio stage, where gymnasts don Under Armour’s performance-crafted leotards, accessorized with 5,000 Swarovski crystals … per uniform.

With five girls making up the team (Aly Raisman, Gabby Douglas, Madison Kocian, Laurie Hernandez and Simone Biles), every competitor was given eight competition uniforms, coming in at a projected price tag of $1,200 a piece, according to The New York Times. 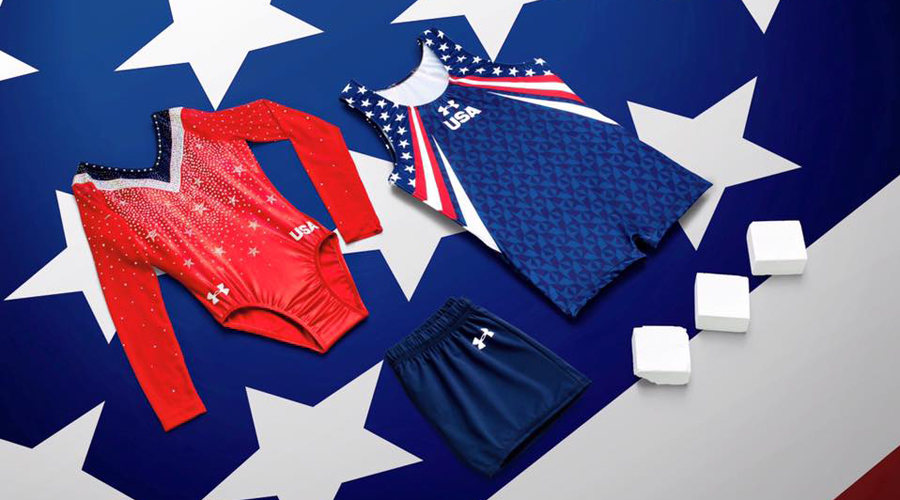 Photo courtesy Under Armour. One of the Swarovski competition leotards pictured on the left.

To our knowledge that’s the most expensive, studded-out Olympic uniforms to date, shining — or should we say sparkling — the spotlight on Under Armour. While the company can’t actually promote its Team USA Olympic gymnasts (given it’s not an official Olympics sponsor and must follow the endorsement restrictions of Rule 40), its logo is doing plenty of legwork on primetime TV.

Olympics viewers have taken to social media to call out Under Armour, spurred by the gold medal win by the women’s U.S. gymnastics team, and the conversation is pretty focused on price and crystal count.

Twitter commentators remarked, “How in the hell can a leotard cost 1200 bucks?” and “$1200 for that @UnderArmour leotard?!  somebody overpaid.” But more than eliciting gasps over the price, the UA callouts praised the leotard designs. Even self-proclaimed Nike fans gave props to UA for the uniforms.

Within the Twitter jib-jab, one user brought up a good point about the uniforms’ construction, writing “And then you realize these young women are flying through the air with literally POUNDS of rhinestones on them.” Does the glitzy design help or hinder overall performance?

The world of gymnastics works a little differently, thanks to Martha Karolyi, the Hungarian-Romanian U.S. women’s gymnastics national team coordinator — a position she’s held since 2001. Her husband held the position prior, from 1999 to 2000.

If Karolyi has a mantra it would be “bling-bling.” The long-time Olympic coordinator has been credited with the increase in crystals over the past decade, suggesting the look is essential to the mentality of her gymnasts, and furthermore that the uniform shock value is essential in the judging process. Karolyi had the final say-so on the Rio competition leotards, and of course was instrumental in the training that led to the extraordinary performance that won “The Final Five’s” Olympic team gold.

Under Armour and partner in Team USA leotard construction GK Elite — who has been the exclusive manufacturer of competitive gymnastics apparel for the U.S. National Team since 2000 — also produced 12 practice leotards for each competitor. USA Gymnastics signed their sponsorship deal with Under Armour in 2013, to extend through the 2020 Games in Tokyo.

GK Elite markets its co-branded UA leotards to consumers, but not the exact Olympic replicas. These consumer pieces run at roughly $70 per leotard … sans all those crystals.

Photos courtesy Nike and Under Armour

Malden Files for Chapter 11 to Facilitate Sale of Company 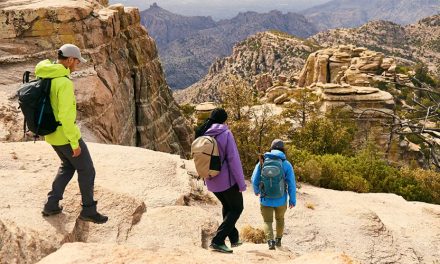