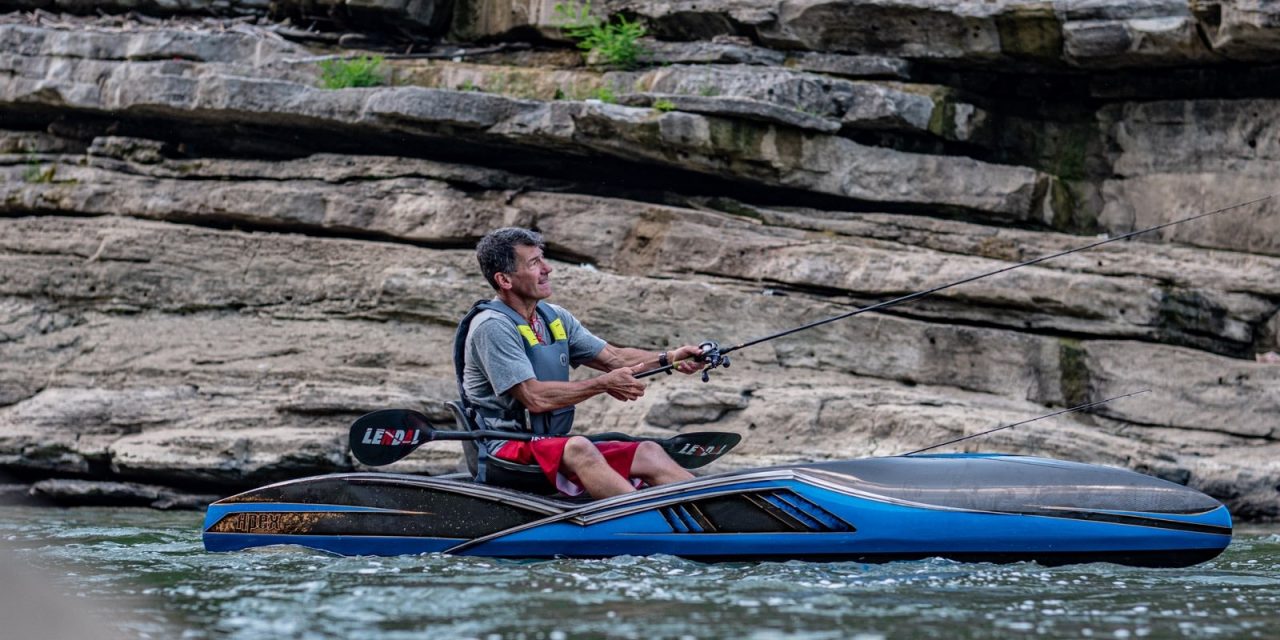 That’s the theory behind Diamond Shield material, which is taking the fish kayak world by storm in its debut in the Apex Tyr — the first carbon-fiber fishing kayak.

The craft’s polyurea elastomer material was developed by Russ Emanis, an engineer at the forefront of the composites industry for decades, who’s worked on everything from Lockheed Martin’s F-22 Raptor project to building cutting-edge composite bicycle frames.

Emanis, who calls his ODG Composites’ material Element Xtreme Coatings, was tapped by former Olympian and Jackson Kayak founder Eric Jackson to use the material for the roll-out Tyr model in his new Apex paddlecraft company. A longtime chief composite engineer for South Carolina’s Innegra Technologies, Emanis has used the elastomer in his personal aircraft development, including his Odyssey aircraft, but said it’s never been used in composites before.

“I found a way to use it for in-mold coating for epoxy composites,” he said, adding previous uses for it stem from high-abrasion areas in heavy industry, such as equipment coverings and conveyor slides, “where things get scratched and scraped.”

Benefits, he added, include that it’s super tough and durable, you can apply it thinly and it’s available in any color. You can either mold it in or spray it on, he added, making it the perfect material for any marine, auto or specific aircraft application, “like the leading edges of wings.”

Currently working with Canadian canoe and kayak manufacturers using Innegra, Emanis joined with Apex founder Jackson to apply his new material to paddlecraft, spraying it into the mold while layering Innegra between two sheets of carbon to create one of the lightest fish kayaks on the market. “Most Innegra is a hybrid, co-woven with other materials,” he said. “But because this material is so lightweight and tough, we can use 100 percent Innegra sandwiched with two different types of carbon,” he added.

“This is big news for the kayak and the composites world,” said Jackson, who built plastic kayaks at Jackson for nearly two decades before launching Apex. “It’s totally new to the composites industry and is an outer coating that gets molded into the boat and is tougher than anything used in kayaks today.” Jackson added it has the ability to take everything from whitewater to recreational kayaks to the next level. “We have future plans that will revolutionize the kayak industry,” he said.

Emanis’s Element Xtreme Coatings, dubbed Diamond Shield in Apex’s application, debuts in its 12’10” Apex Tyr fish kayak. Thanks to its carbon-fiber, Innegra and foam core, it weighs just 34 pounds, meaning that unlike heavier plastic kayaks, users can car-top it easily and carry it to the water solo. Joining its lightweight and durability attributes, the material is abrasion-resistant, UV protected and flexible.

Aside from its new Diamond Shield material, other features of the composite fish kayak include a SUP-style, wave-penetrating hull for lower draft and maneuverability; width carried over a long distance chine-to-chine, providing a lower draft and enhanced stability even when standing; a low point in the gunwales for paddling and landing fish; an open stern for water to drain aft; and magnets for keeping accessories handy.

“Several factors prevent many people from wanting to kayak,” Jackson said. “Most fish kayaks are super heavy and difficult to load, unload and get to and from the water, often requiring trailers. This solves that with its weight reduction. Plus, an innovative swivel seat makes it easy to get in and out of and a flat planning hull, instead of a keel, keeps it stable despite its light weight. It’s a way for those who have aged out of kayaking, or never were comfortable with it, to enjoy the sport.”

As well as plans to introduce the material into the canoe market, Emanis also plans to continue courting the experimental aircraft industry as well as military-type applications. By the 2021 EAA AirVenture Oshkosh airshow in Wisconsin, he said, it will be featured in several new aircraft airframes.

“It’s great for the kayak industry, but it has a lot of applications elsewhere as well,” he said. “We’re just getting started.”