Timbuk2 has sponsored the 2012 Red Hook Crit, an unsanctioned race in Brooklyn, NY, held at night featuring a fixed gear criterium and a 5km running race.

In its first year as a sponsor, Timbuk2 is showcasing its continued dedication to its roots in bike culture by not only sponsoring the Red Hook Crit, but by also integrating itself into all elements of the event.

Timbuk2 is providing the Especial Tres, one of their newest performance line of bags that just launched in February 2012, as a podium prize for the winners and donating 100 percent of proceeds from limited edition one-of-a-kind canvas messenger bags featuring works from celebrated New York-based artists to the Red Hook Crit’s non-profit arm, Added Value, which will be for sale on Timbuk2’s website following the race. Timbuk2 is also providing complimentary Klean Kanteen steel pints for the first 150 guests at the Red Hook Crit official after party and outfitting select Red Hook Crit riders with Timbuk2's new Race Duffel, which also launched in February 2012.

“The Red Hook Crit rider is equally skilled on a bike, passionate and brave, which has been and continues to be Timbuk2's core user,” said Timbuk2 CEO Mike Wallenfels. “We want to support those that share the same enthusiasm for bike culture as Timbuk2 and the Red Hook Crit couldn't be a better fit.”

The Red Hook Crit was born in the post-industrial Brooklyn neighborhood Red Hook. This unique event combines the underground art of street racing with the intensity of high-level competition in a spectacular urban environment. First held in 2008 to celebrate organizer David Trimble’s birthday, the Red Hook Crit has established itself as a prestigious and much loved event in both the local community and greater athletic world. This fast, intense, and spectator friendly race is the pinnacle of a weekend of events that includes dinners, art exhibitions, parties, and group bicycle rides and runs.

In its fifth year, the Red Hook Crit will take place on Mar. 24, 2012 in Brooklyn, New York. The race is held over 24 laps for a total distance of 30km. Top level cyclists push massive gears to average in excess of 27mph over the entire distance of the race. For amateurs, it is a test to see how many laps they can complete before being lapped and eliminated. For pros and elite level riders, the pressure to perform on race night is high as the Red Hook Crit happens only once a year. Every former champion of this race has since been signed to a professional racing contract. 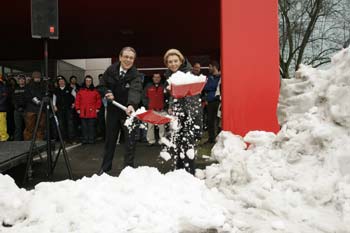