The Timberland Company announced plans to open its second location in Manhattan, at 28 West 34th Street between 5th & 6th Avenues near Herald Square.

“Weve  enjoyed great success at our 474 Broadway location since it opened in 2009, and are happy for the opportunity to grow our presence in one of the greatest cities in the world,” said John Pazzani, vice president of retail and e-commerce for Timberland. “New York is filled with people who love the outdoors and the lifestyle it embodies, whether theyre in the city or on a weekend getaway.   At the new Herald Square location, theyll be able to find all the Timberland gear they need to explore, wherever their adventures take them.”

Besides its wide  range of outdoor apparel, accessories and footwear, Timberland is designing an assortment of New York-inspired footwear and t-shirts exclusively for the Herald Square store.

The Herald Square store joins existing Timberland specialty retail locations at 474 Broadway in SoHo, Garden City and White Plains, as well as several outlet stores in the surrounding area, including Woodbury Commons.  This store opening is part of a broader expansion effort underway for 2011, which to date has included Boston (March 17) and San Francisco (April 29), with others being planned for later in the year in key markets. 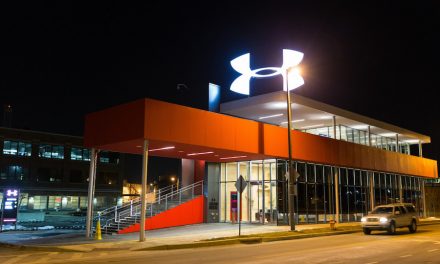 Under Armour Partners To Turn Vacant Lots Into Playgrounds