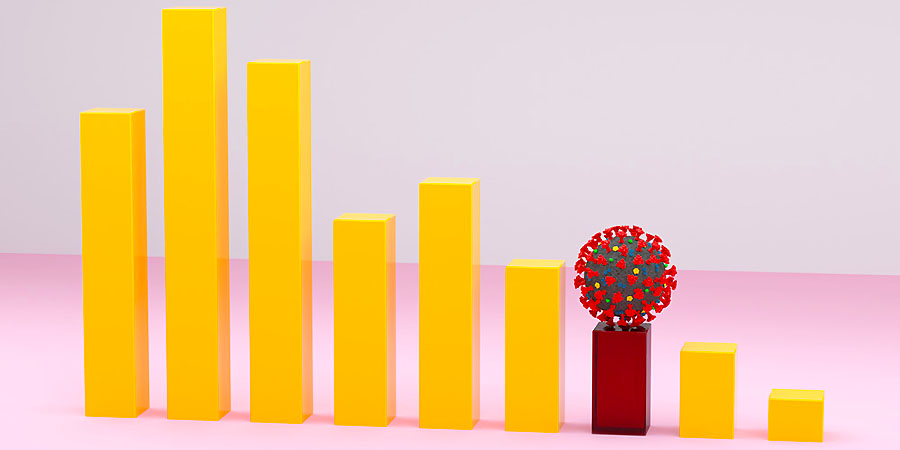 A number of surveys arriving in recent days have detailed the severe impact social distancing measures to stop the spread of COVID-19 has had on U.S. retail and prospects in the near term. Some cautious optimism, however, could be found.

Americans See Recession Coming
Between 80 percent and 90 percent of American consumers expect a recession within the year in light of COVID-19, and 89 percent believe their geographic area is affected by the outbreak, according to a survey of 2,608 American consumers. The survey, taken from March 18 to 20, came from L.E.K. Consulting and Civis Analytics, a data science firm.

Most respondents said they are spending about 4 percent to 6 percent less than they would if it were not for COVID-19. Interestingly, people who believe the severity of COVID-19 is most critical (18 percent of the population) are spending significantly – 17 percent – more, likely related to stockpiling of groceries and other essential needs. Overall respondents indicated they’re pulling back 40 percent to 50 percent on expenditures as dining out, outside-home entertainment and outside home fitness.

Said Maria Steingoltz, managing director at L.E.K. Consulting, “As restrictions and social norms evolve in response to COVID-19, consumers are of course adjusting their broader behaviors, reporting to us more ‘at-home’ activities like cooking, watching TV, social media browsing and exercising at home. These changes create a need for brands to explore how they can meet consumers where they are and engage with them in novel ways, like live digital fitness classes.”

Companies Preparing For Possible Job Cuts
Forty-nine percent of companies report they are very, or somewhat likely, to conduct layoffs in the next three months, according to an online survey of 254 U.S. companies from Challenger, Gray & Christmas, the outplacement firm. The survey was taken between March 20 and 26.

Of the respondents, 11 percent reported they have conducted permanent layoffs and 7 percent have conducted temporary layoffs. Fourteen percent of companies stated they have furloughed employees, while 37 percent reported they are very likely to, or somewhat likely to, do so in the next three months. Andrew Challenger, SVP at Challenger, Gray & Christmas, said in a statement, “It is clear companies across the country are instituting very real and difficult cuts. Employers are wary of letting their workers go right now after fighting so hard to find and retain them during one of the tightest labor markets in recent history.”

While cuts may be coming to many companies, 47 percent are interviewing for open positions right now and another 10 percent reported that while hiring is limited, they are hiring for critical positions. Nearly 98 percent of respondents reported instituting work from home policies, with 28 percent enabling all workers working from home. A third now offer additional leave options while 11 percent are offering paid sick leave.

Shift To Online Spending
By mid-March, 47 percent of U.S. consumers had cut back on spending in anticipation of the coronavirus’ spreading, and 42 percent had begun stockpiling groceries, according to a survey of more than 500 U.S. consumers fielded on March 17 from First Insight.

The shift to e-commerce had already begun by early March, the survey found. Thirty-four percent of respondents indicated they were shopping online more in the March 17 survey compared to 21 percent in a February 28 survey. The number of consumers shopping less frequently in-store was found to be 49 percent in the March 17 survey versus 30 percent in the February 28 survey. According to the survey, the vast majority of respondents reported an impact on product availability (84 percent) and shortages (72 percent) from the pandemic.

Order Cancellations A Stabilization Strategy For Stores
A survey of 2,000 largely single-store, North American retailers taken from March 19 to 23 found that nearly 63 percent are reporting canceling on orders.

Overall, the survey found 43 percent reporting complete store closures at the time of the survey. Asked about priorities to mitigate losses at this time, the top one was to increase online sales, cited by 28 percent; followed by cut operating costs, 26 percent; reduce inventory (including new deliveries), 23 percent; sell existing inventory (at a discount), 18 percent; and other, 5 percent. Asked the best way they can support vendors and their own business at this time, the top way was to extend credit terms, cited by 52 percent; reduce or cancel deliveries, 27 percent; and delay deliveries, 10 percent.

COVID-19 Seen Bringing U.S. Communities Together
Eighteen percent of Americans said their community will emerge stronger from the COVID-19 pandemic, according to a survey from a Public Agenda/USA Today/Ipsos Hidden Common Ground. The survey was conducted at the end of March.

Small Business Owners Fear Recovery Prospects
A LendingTree survey of more than 1,200 small business owners found that 71 percent worry they’ll never recover from the downturn due to the coronavirus pandemic. Nearly half have temporarily closed their businesses. They have also laid-off workers or reduced hours while trying to source funding to stay afloat. LendingTree conducted an online survey of 1,221 small business owners who had previously applied for funding through LendingTree’s small business lending database. The survey was conducted from March 24 to 30.

CEOs Optimistic For Robust Recovery
Chief Executive’s April survey of CEO confidence, fielded April 1 – 3, finds CEO confidence in the current business environment fell by 34 percent since March to an anemic 4.3 out of 10, on its 1-10 rating scale. This is the lowest level in the survey’s history, slightly down from the fourth quarter of 2011 when the U.S. national debt topped GDP for the first time since the late 1940s.

Yet, optimism for business conditions one year from now remains high among polled CEOs. At 6.7 out of 10, the leading indicator is still flirting with “very good” territory and remains far higher than it was during the trade war last summer. Pent-up demand, government stimulus and rock-bottom low-interest rates are expected to drive the resurgence of most businesses by the end of June. The report, however, stated, “While the robustness of the economy pre-crisis is a factor, several respondents cited to explain their optimistic view, the majority said it is based on the assumption that the U.S.—and the globe—will soon get COVID-19 under control and find a cure or treatment.”