The weather in Orlando turned warmer just as the 19th annual gathering of the sporting goods industry known as The Super Show got under way. The move to Florida was expected to signal a new chapter in the saga of the now well-traveled show, but the event proved to be as troubled and poorly attended as the Las Vegas venue.

The lack of retailer traffic is a shame, considering the opportunity for the industry to connect in one centralized forum, but the shows organizers have to take a long look in the mirror as this shows future continues to look uncertain at best.

The retailers — which included all the majors, like TSA, Dicks Big 5, Sport Chalet, Hibbett and Academy — that did attend were treated to pockets of real energy and excitement as Licensed Apparel, Branded Apparel, Fitness and Team Sports had good shows based on the strength around specific brands, innovation and hype. The companies that expected to see some overflow from the strong draw of others were disappointed. If they didnt set their own table, few came to partake of their offerings. The companies that took the opportunity to stress new innovations drew good traffic.

The move to Orlando had one obvious opportunity in our opinion — the proximity of more drive-in traffic. One of the biggest draws for Atlanta was the ability for retailers and dealers to drive from as far away as Ohio (when we had retailers there) and Virginia. This was a big negative for Vegas. Although one could conceivably make the drive from SoCal to the show, Nevada and the surrounding states are barren compared to the relative population density of Florida and the Southeast.

While the show published numbers that reflected increased buyer registration and an increase in exhibitors, attendees would have to challenge the numbers. SGMA and the show were the largest exhibitors and took up most of the space in the center of the show floor. It was more convenient for us, but was clearly a reflection of unsold space. If exhibitors increased, it was due to the shows inclusion of the dance, cheerleader and equestrian companies, rather than the core sporting goods brands that originally built the show.

Big gaps existed in Footwear (New Balance was the only attendee, but Fila had a few shoes in the back) and Equipment (no Wilson, Rawlings, etc), but the lack of exhibitors gave focused attention to the vendors that did exhibit.

Russell Corporation, for instance, had one of their best shows in years from a marketing perspective as the company capitalized on the lack of other apparel and team equipment exhibitors to score major points with the majors. They were able to pitch their consolidated brand message and even picked up some opportunity buys from retailers opening stores or replenishing after a good holiday season. Big initiatives for Fall included the new “Sweatless Sweats” program and their Womens business that now enables the company to segment product through the Moving Comfort line for better retailers and the Russell line for mid-market. They got all the attention as their primary competition in this area skipped the show.

Reebok was a big winner in the Licensed Apparel arena, with the new booth booked solid throughout the first two days. The lack of footwear was a downer for many, but the company is clearly playing to the strengths (and weaknesses) of the show and the addition of footwear would have most likely pushed the budget past the reasonable point. We also picked up a quip from one GMM in the aisle that said the brand is gaining momentum for their Branded Apparel offering as it drafts off the success of the Licensed business.

The licensed area as a whole was on fire as Colosseum, New Era, G-III, Majestic and others capitalized on the strength of the category and newfound exclusive deals that should prices  and profits  move higher in the coming years. There will be more on this area in next weeks issue.

Under Armour was also a clear winner and showed no signs of slowing as retailers again mobbed the booth and the company took the opportunity to nail down big 2004 programs with all the majors in attendance. The company has found surprisingly good fortune in the Womens area, with roughly 9% of the business coming from the gals in 2003, a number that is estimated to be in the 17% to 18% range in 2004.

For instance, we heard it “woulda been nice” if show management had made the investment in aisle number signs for the ceiling. Attendees were left to wander around a new venue with no clear markings to follow. The show “shoulda been better attended” if the show had taken some initiative to cross-promote with other events at the same time in Orlando. Big missed opportunity with Surf Expo right across the street that “coulda been” a nice tie in, not to mention the Orlando Marathon the day before the show. A golden opportunity missed to enroll performance companies.


>>> We really want to support this venue, but the show and SGMA need to take a long look at whats wrong here. The key to any recovery program is to first admit that you have a problem…

Footstar Settles with Robinson Over Termination 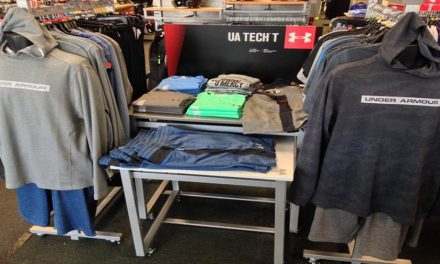