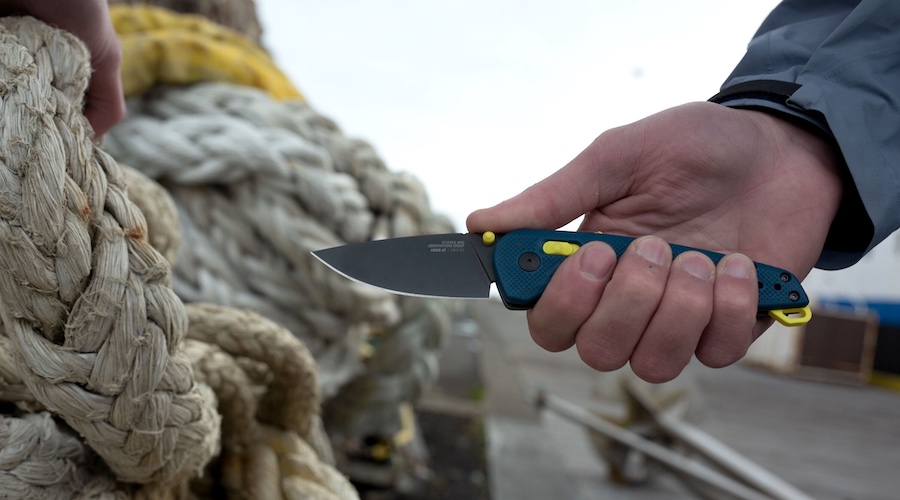 The current environment might not seem like the right time to unveil a major rebranding, what with the coronavirus sparking the worst economic slowdown since the Great Depression.

But this period of uncertainty and instability has proven optimal for Studies and Observations Group (SOG), the Seattle, WA-based maker of knives, tools and packs, to formally announce the brand’s next chapter.

After all, many consumers are hyper-focused on disaster preparation, so the demand for survival categories such as portable power, water filtration and personal protection—SOG’s specialty—has soared.

With sales holding steady during the last two months of the pandemic plus the shift to a new line of products and a fresh approach to the marketplace, SOG leaders realized that now, in fact, was the ideal time to reintroduce the brand to longtime evangelists and also expose it to a new legion of fans.

“People have said to me, ‘Oh, it’s a pity you’re doing a rebrand right now because it’s not the right time,’” said Jonathan Wegner, SOG’s vice president of brand. “I think it’s the perfect time. We’re trying to be a brand that’s more accessible and more useful to a broader number of people. The rebranding is going well and it’s having the effect we wanted to have.”

Wegner and SOG CEO Joe Mc Swiney recently spoke with SGB Executive at length about the company’s new direction, which they began forging a couple of years ago with the realization that SOG needed to return to its roots. That began with a mantra encapsulated by the brand’s name. They would study and observe customers and their product needs—and then create solutions to match.

“SOG originally was created to enhance human capability in extremely dangerous, potentially life-threatening situations and they did it primarily through a limited range of products, focusing on categories like a knife or a multitool,” Mc Swiney said. “As we looked into the future, we wanted to re-engage with our customers and upgrade our ability to do that.”

Before looking forward, SOG needed to step back to the original mission of the brand, which Spencer Frazer founded in 1986. SOG’s first knife, the S1 Bowie, paid homage to the knife U.S. special forces used in Vietnam, with Frazer naming the company in honor of the unit that originally developed the knife.

Frazer still has an ownership stake in the company but, after retiring in January, now mostly focuses on product innovation for the brand through an advisory role. He owned SOG individually from its founding in 1986 until 2008, when he sold a stake to a private equity group called MCC Capital, which invested in the brand and pushed it to new levels.

MCC held its portion of the company until 2011 before selling to a conglomerate of three private equity companies—Gladstone Investment, Montlake Capital and The Mustang Group—which now own the company with Frazer.

As Mc Swiney and Wegner admitted, the brand drifted away from its roots, so they decided to get it back on track. During a daylong brainstorm session, SOG’s leaders began creating a new roadmap centered on transforming the brand’s “stance, offering and direction.”

“We went through a process to identify what it is that the brand stands for, what our unique position could be in the market,” Wegner said. “And through that process of studying and observing ourselves, we found that the one thing that people appreciate and trust SOG for is to enhance their capabilities. That was the trigger for us—to think about what our core focus should be.”

SOG’s refresh—a “reconfiguration” of the brand, as Mc Swiney and Wegner called it—begins with product. The company is introducing a new line of knives and tools for 2020, all featuring new technologies and innovations, materials and colors, as well as new packaging for those products.

But the heart of the brand’s new look and feel is about a philosophy, a mantra, an outlook on who SOG has in mind when it creates a new product and brings it to the marketplace. The company’s new lineup was all built to meet or exceed the specific demands of the users they’ve been deliberately designed for, be it for professional, outdoor or everyday use.

It’s that category distinction that is especially important to SOG’s rebrand. And that begins by listening to core customers, determining their product needs and crafting solutions to match.

“Going back to our roots is mainly about going back to our end users,” Wegner said. “They’re the people that, in times of need or as an extension of themselves, utilize our product. So all ideas nowadays really originate with a ‘what if?’ question from our users and as we started that, we’re always going back to them.”

Another important pivot is how SOG goes to market. The company has adjusted its channel strategy toward specialty and away from mass retailers like Walmart, while also clamping down on Amazon resellers—all to better protect the brand’s image and better reflect its new course.

“We don’t have a particular concern about mass,” Mc Swiney said. “However, to position the brand correctly, we need to re-embrace the specialty retailer. And to do that, we’ve had to take a step-back position in relation to mass. Specialty is important to us. We started that journey at the end of ’18, made progress in ’19 and we’re going to be on that journey of integrating ourselves back into being a core key partner with specialty over the next number of years. I would like to think that specialty retailers are starting to see that.”

Mc Swiney said this rebrand is phase one for a long-term strategic plan for the brand. The focus over the next year to again make SOG a “premium” brand with its core audience of professional, outdoor and everyday users, as well as refine the channel strategy through a heightened emphasis on specialty doors.

The second phase, he said, is to “truly be a mission-centric solution provider. That will be in a future year, probably late ’21 early ’22 where you’ll start to see collections. When people think of SOG, they’ll think of us as a collections brand.”

And the third phase, which Mc Swiney admitted is “quite vague,” is to create a new market. “Any brand that scales exponentially doesn’t do it by going head to head with direct competition,” he said. “They usually change the story; they change the landscape and they have no computation.”

Mc Swiney wouldn’t put an exact price tag on the campaign, only that it was a “multimillion-dollar investment.” With such a financial commitment to SOG’s new direction, what is their expected return? Both Mc Swiney and Wegner said it’s less about hitting a particular sales number and more about reaching a particular segment of its universe.

“For me, success looks like winning back a lot of people that still believe in the brand, but now they’re actively carrying it because they’re proud of us going back to our roots—that’s the qualitative perspective,” Wegner said. “From a quantitative perspective, I’d like to see us in a lot more doors and a greater variety of goals. I think that will prove out the approach that we’re trying to take to provide enhanced capabilities for people in a broader spectrum of uses.”

Mc Swiney said the goal is for SOG to recapture the spirit of the brand’s early days and pair it with innovative technology, premium material and a renewed focus on customer centricity. All while carving out a new yet familiar niche in the marketplace.

“Any person who’s paying for a SOG and holding a SOG, we want them to understand that we’ve invested in function while at the same time main maintaining style and sense of purpose both in terms of how the product operates as well as how it looks,” Mc Swiney said. “We believe that is a differentiator in our industry.”