“Skechers fourth quarter revenues of over $569 million set a new record for the period, and followed a record third quarter 2014, which was the highest quarterly sales in the company’s history. This momentum led to record annual revenues of $2.378 billion for 2014, an approximately 29 percent increase compared to 2013 sales of $1.846 billion,” began David Weinberg, Skechers chief operating officer and chief financial officer. “The outstanding fourth quarter growth was the result of double-digit improvements in our domestic and international wholesale and Skechers company-owned retail businesses, all of which benefited from our universally appealing men’s, women’s and kids’ product. We are also pleased to note that within our domestic wholesale business, our average price per pair increased by 7.4 percent in the quarter, and within our international wholesale business, we experienced double-digit growth in many key countries that were negatively impacted by currency issues, both further testaments to the strength of our brand and product.”

Robert Greenberg, Skechers chief executive officer, commented: “Just a year ago, we were honored as the 2013 Brand of the Year for GO (Footwear News) and 2013 Running Design Excellence and Children’s Design Excellence (Footwear Plus), and now we are 2014 company of the Year (Footwear News and Footwear Plus), and the No. 2 footwear brand and the No. 1 walking brand in America. This speaks volumes to the product we have developed and delivered, the global marketing support behind it, and the many other achievements and milestones made throughout the year. In the fourth quarter alone, we signed world renowned drummer Ringo Starr to a global marketing agreement for our growing men’s footwear line, launched our first Demi Lovato campaign – which spurred a flurry of social media engagement around the world, and saw Meb cross the finish line first among the Americans at the New York Marathon. We also announced the opening of our 1,000th Skechers retail store, completed the initial phase of the automation of our European Distribution Center equipment and moved up our Fall 2015 buy meetings with our key domestic accounts to October and November, which allowed us to meet the increased order rate for our new product. This in turn positively impacted our international partners as they have been able to place orders for the coming season earlier, which will allow us to deliver more product in a timely manner. In the first quarter of 2015, we decided to convert three distribution partners doing business in 14 Central Eastern European countries to wholly-owned subsidiaries, enabling us to leverage the success we are experiencing across Europe. With our women’s footwear reaching an expanding audience thanks to both the fresh styling and our advertising campaign featuring Demi Lovato, our men’s footwear collectively achieving the highest percentage gains, and new innovations in our children’s footwear – including Game Kicks, the shoe with an electronic memory game built in – we believe the demand for our footwear is at an all-time high. We are looking forward to delivering new product in the Spring, expanding the Skechers retail store base to an estimated 1,250 stores by the end of 2015, and continuing to see strong double-digit and, in some cases, triple-digit gains in Europe, the Americas, the Asia-Pacific region and the Middle East. We believe there are still tremendous growth opportunities for Skechers in 2015 and beyond.”

David Weinberg continued: “2014 was an excellent year for Skechers, and we expect the momentum to continue in 2015 based on domestic and international Skechers retail stores comps of 17 percent in January, year-over-year worldwide backlogs up 60 percent at December 31, 2014, and the steady demand for our product including expansion in new doors and existing doors. With continued investments in our infrastructure for the coming years, including equipment automation upgrades at our European Distribution Center and establishment of a company-operated distribution center in Chile, $466.7 million in cash and inventories in-line with expected sales, we believe we are prepared for growth in 2015. We believe the best is yet to come, and are looking forward to the first quarter of 2015, which we expect will be a new quarterly sales record of $690 million to $710 million and earnings per share of $0.95-$1.05.” 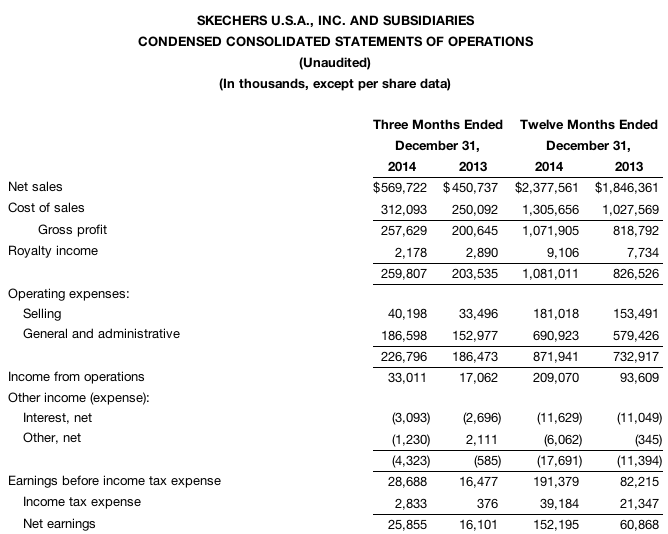 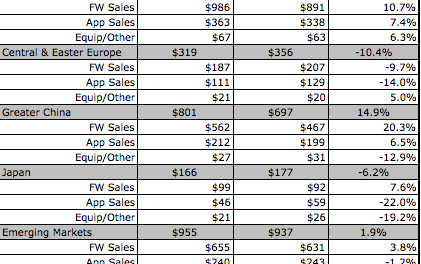