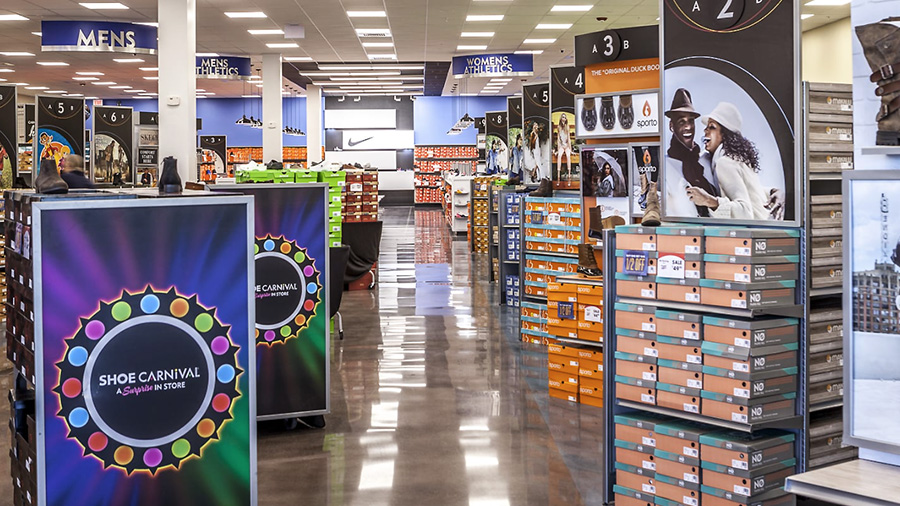 Shoe Carnival reported fourth-quarter earnings more than doubled as revenues improved 23.4 percent to $313.4 million. Earnings reached $20.6 million, or 72 cents a share, against $7.4 million, or 26 cents, a year ago. The footwear off-pricer expects fiscal year 2022 net sales to increase 4 to 7 percent on top of the 36.2 percent net sales growth achieved during fiscal 2021.

“Our outstanding team members delivered double-digit sales growth and triple-digit EPS growth during every quarter of 2021, resulting in the best year in Shoe Carnival’s 43-year history. Fourth-quarter momentum was very strong as we closed out the year, with store traffic up 18 percent, net sales up 23 percent, and EPS growth of 177 percent versus the prior year,” said Mark Worden, president and CEO.

“Our strategic investments, and recent acquisition of a second retail banner, have us positioned very well for continued sales growth in 2022, and for rapid store expansion in the years ahead. We now expect to sustain operating income and EPS levels that are more than double the pre-pandemic record levels set in fiscal 2019.”

As a percentage of net sales, selling, general and administrative expenses (SG&A) increased 1.8 percentage points to 28.4 percent due to one-time acquisition-related expenses of $3.2 million and increased investment in advertising and store-level wages.

Store Growth Update
During fiscal 2021, the company completed a multi-year store productivity improvement program. The result of this initiative is that all ongoing stores generated positive cash flow during fiscal 2021. The full fleet productivity is strong, generating sales of over $300 per square foot, net cash provided by operating activities of $148 million and free cash flow of $117 million. As such, the company has completed the program and expects limited, if any, store closings for the next several years.

In December, the company acquired substantially all of the assets of Shoe Station, Inc., a Southeast retailer of footwear and accessories. As of March 16, 2022, the company has completed back-office integrations approximately nine months ahead of schedule and expects to transition into store growth later in 2022.

The company’s strategic plan is to accelerate store count expansion during each of the next three years and aims to add 10-plus new stores during fiscal 2022, over 20 new stores in fiscal 2023 and over 25 new stores annually by fiscal 2024.