While the shift back toward at-once ordering and just-in-time deliveries has been going on for the last couple of years, it is clearly accelerating due to the tighter credit market and consumer slowdown. Vendors remain clearly concerned about how the trend toward fewer pre-season buys is reshaping futures programs — and their own ability to finance the business.


The changes in how retailers are purchasing product for resale were explored as part of the most recent monthly SGB Question.  For retailers responding to the Question, it's become even more necessary to reduce inventories to the minimum to preserve cash flow and meet lender requirements in today's troubled economic climate.  According to several responses from retailers, many are increasingly foregoing the often deep discounts offered in pre-season bookings to avoid being stuck with huge markdown risks at the end of the season.
But, stores have been pushing for better at-once programs for years. Buying closer to the season and even in-season helps buyers make more accurate buys around consumer demand and reduces markdown risks. Working on leaner inventories also enables retailers to chase hot product instead of waiting for last-seasons' slow-sellers to liquidate. Finally, frequent in-season deliveries help stores manage their cash better.
However, many retailers claim vendors have been reluctant to share inventory risks and do not want to build up adequate in-season inventories to meet their fill-in needs. “The retailers have to have more support from the manufacturers on having replenishable merchandise rather than up front orders where the retailer takes all the risk and financing responsibility,” stated a chief merchant at a major regional full-line sporting goods chain.
One soccer specialty chain admitted to being frustrated by the inflexibility in making changes in futures orders. Another buyer for a nationwide specialty chain said he would rather use more fill-in orders to chase sales, but has to pre-book orders nine months out to get enough quantities for the season because of vendors holding only minimal in-season stock.
Since he doesnt believe in canceling orders, his only option when inventories build up is to push out deliveries until the old inventory sells.
Said an assistant GM at an independent sporting goods store, “Many product categories can get into an over-inventory situation using futures orders. The more we can use fill-ins and at-once orders, the better control we can have.”
“Our crystal ball isn't as good as it used to be considering the vast product available and the consumer awareness of that variety,” added Randy Ruch, CEO at Schuylkill Valley Sports. “That is somewhat a result of the Internet.  We need manufacturers to get on board with that philosophy if they want their customer base to remain viable.”
While many vendors see this primarily as a shifting of inventory exposure from retailer to supplier, a few also believe the shift away from futures programs will ultimately hurt product development and differentiation at retail as vendors commit to fewer styles, which will eventually impact retail sales.
Brad Gruber, national sales manager at Grendha Shoes Corp., said that with vendors being forced to forecast narrow and deep, there will be little differentiation between retailers and margins will consequently suffer.   “This no risk, no reward attitude will not help anyone gain market share and creates an environment of sameness which prevents the growth of a potentially hot item or brand,” said Gruber.
Eric Tung, president of FERA Intl. Corp., said that while retailers may feel more at ease with less inventory, fill-in orders may not be met if demand is sudden and quick. “There are limits to how fast product can be packed, shipped, delivered and out on the floor. So there is greater risk for the retailer of lost sales,” he said.
Futures programs also provide the discounts that bring the coveted high-margin buys to retailers. But a director of global merchandising for a footwear supplier noted that the loss of high-margin product will ultimately be offset by safer and better purchasing decisions made closer to consumer purchase.
Many respondents speculated on what an environment increasingly driven by quick response would entail. In the near term, many saw an overstock situation in the market over the next six to eight months.  Longer term, the likelihood of fewer overall inventories across retail reduces markdowns risks, but increases risks of understocks and creates less closeout opportunities.
Some saw smaller vendors struggling to obtain available futures and holding greater at-once inventories. Larger chains were also seen as gaining an advantage by having first dibs on available in-season goods.
Regardless, many saw retailers increasingly demanding real-time inventory visibility and a shift to almost a 24/7 order management process. Many surmised that both vendors and suppliers have to be doing a better job reading consumer demand around products and working much closer together.
“The keys to success will be the ability to manage inventory effectively, and having the flexibility to adjust forecasted orders as needed,” observed Larry Hartford, president of The Hartford Sales Group, which represents Sugoi, Powerbar, Timex, Spira and Penguin Brands in California, Arizona and Nevada.
Added Jim Cyr, president of The Cyr Group, “The pendulum has swung toward the consumer whose purchasing decisions are being made more cautiously or delayed.Everyone along the supply chain is going to have to be more flexible to adjust to this market condition.” 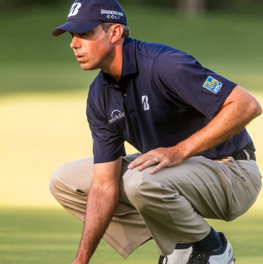 NGF: Rounds Played Down for March…