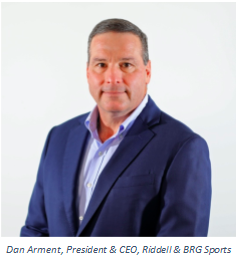 Dan Arment, president and CEO of Riddell & BRG Sports, has been elected as the new Sports & Fitness Industry Association (SFIA) chairman of the board for a one-year term.

In addition, two new directors were elected, and five members were re-elected, to the SFIA Board of Directors for three-year terms. This announcement was made at the end of the SFIA’s Annual Meeting, which took place on Dec. 16, 2019.

“As a long-time Board Member of the SFIA, I am honored to take on the role of Chairman,” said Dan Arment, President & CEO of Riddell & BRG Sports. “The industry landscape is constantly changing, presenting new opportunities and new challenges. I am eager to continue collaborating with this talented group of industry peers, all of whom share the same passion to get more kids, and adults, involved in sports and fitness.”

“We are very excited to have Dan Arment lead our trade association,” said Tom Cove, SFIA President & CEO. “He is a prominent, successful leader in the sports industry, and he will bring a fresh perspective and strong direction in his new role of Chairman of the organization. Dan’s expertise, energy and innovative approach will be invaluable to SFIA as our industry continues to evolve.”