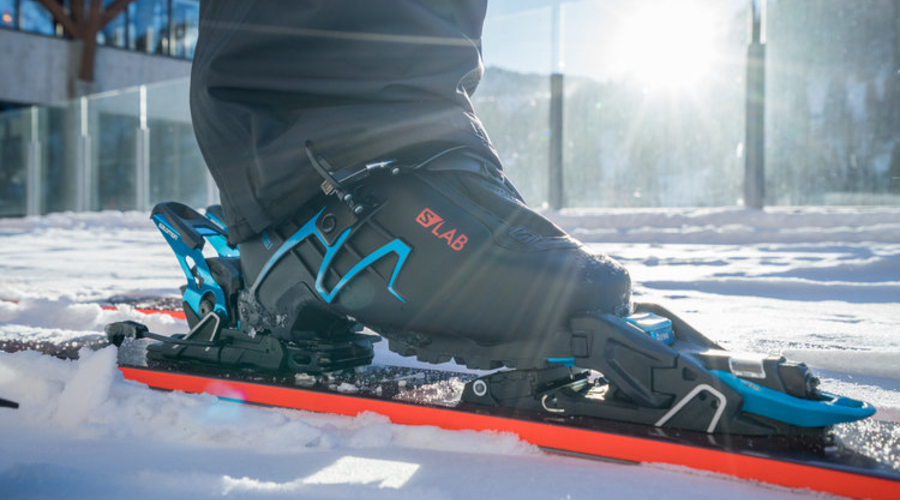 The bindings are compatible with all adult norm boots, weigh in at 1,730 grams for a pair and sport a potentially game-changing design feature.

There’s one piece of ski gear grabbing attention across the industry this week – the Salomon S/Lab Shift MNC binding.

Compatibility is a big part of the Shift’s appeal. With the use of an adjustable toe pedal, it’s Multi Norm Certified (MNC), making it compatible with all adult norm boots, from traditional alpine boots to touring boots. Basically, it does what frame bindings never quite achieved, but in a much lighter package. Frame bindings weigh nearly 3,000 grams, while Salomon’s fancy new creation shaves off over a third of that at 1,730 grams for a pair, including screws. Super-lightweight tech bindings weigh 800-1,400 grams, so this represents only a slight weight increase, but with much better performance.

Salomon spent seven years collaborating with freeskiers before unveiling the S/Lab Shift, which will debut at the Outdoor Retailer Snow Show in Denver next month before becoming available to consumers for the 2018/19 season.

The binding has a leg up on the safety of other tech bindings, as it is the first to utilize the touring efficiency of a free-heel pin binding for ascending and the power transmission of a standard alpine binding for descending. With the shift of a lever, the toe piece transforms from a classic alpine binding to a tech toe with pins.

On the uphill, the pins enable the skier to move efficiently by placing the rotation point close to the metatarsal of the foot and offering a 90-degree range of motion. On the downhill, the toe piece offers one of the highest elasticity levels of any traditional alpine binding on the market. 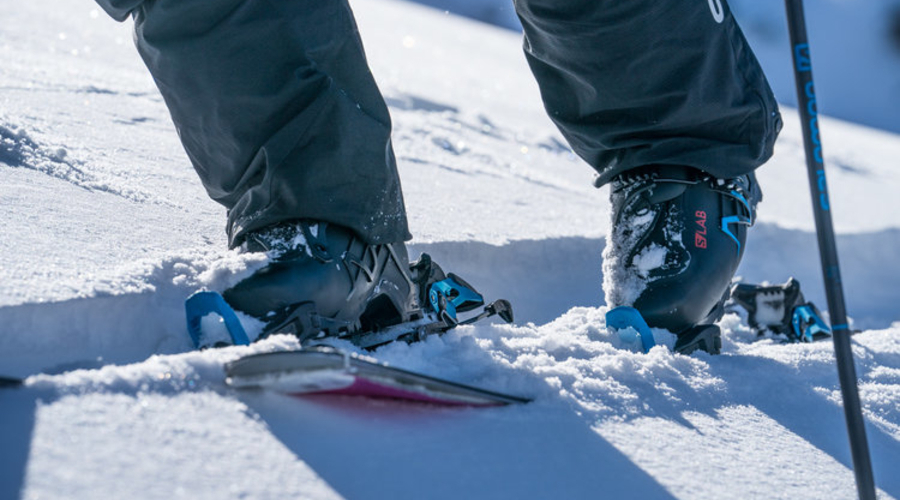 “Pins are for climbing, not charging,” said Chris McKearin, the U.S. alpine commercial manager for Salomon. “With the S/Lab Shift MNC binding, we have all of the elasticity of Salomon’s famed alpine bindings, combined with the power transmission to drive a big a ski and a lightweight, touring-capable package. With in-depth involvement by athletes including Cody Townsend, Salomon’s binding team has finally solved the puzzle of combining efficient uphill capability with true alpine performance.”

The S/Lab Shift utilizes a combination of carbon-infused PA, steel and aluminum to deliver a strong and reliable, yet lightweight construction. It creates a massive strength-to-weight ratio with a DIN setting that ranges from 6 to 13.

“I’ve been really impressed with the design, testing, feedback and approval process that has gone into the creation of the S/Lab Shift,” said professional skier Cody Townsend, who has been involved in the testing and development process since the beginning. “This binding is an engineering feat. By creating a binding that tours like a pin binding and skis like an alpine binding, Salomon has crafted the holy grail, the dream.”

The binding was designed under Salomon’s athlete-driven S/Lab program with longtime Salomon freeski athletes Cody Townsend, Chris Rubens, Greg Hill and many others. According to Solene Chappaz, the global product line manager for alpine bindings, the athlete-driven design process has yielded a product that has been tested to the limits.

“Our global athlete team is very demanding. There has been a large level of feedback and many tweaks from the team during the development process,” Chappaz said. “Having such an excellent endorsement from our athletes will have a huge impact on the success in the marketplace.”