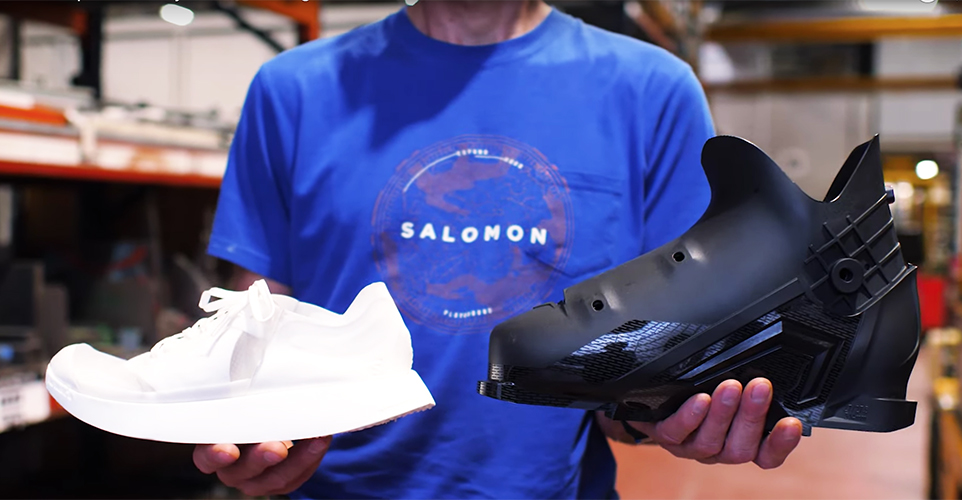 What if your tired, worn-out running shoes could start a new life in a different form?

The engineers at Salomon’s Annecy Design Center in the French Alps have spent years imagining a concept running shoe made completely of thermoplastic polyurethane (TPU), which could be ground down at the end of its life, then combined with original TPU, that could be rebirthed into an alpine ski boot shell.

Salomon, world-renown as a manufacturer of running footwear and ski boots, embarked on the concept to reincarnate and extend the lifecycle of materials used to create a running shoe, offering us a glimpse into the company’s tackling, head-on, of circular economy principles across the brand’s product categories.

Though it is a concept at this point, Salomon’s footwear designers and R&D specialists are working to implement elements into the brand’s running footwear that can be recycled into a ski boot shell and available to consumers for purchase by 2021.

The concept for a fully recyclable running shoe is the first step in Salomon’s commitment to have 100-percent of new products designed to one or several of the company’s circular economy principles by 2025.

“We recognize that we have to do better for the environment by creating Salomon footwear that drastically reduces its impact on the planet. By creating this concept shoe, that can be recycled into a ski boot shell, we are showing that it is possible to find alternative materials to create performance footwear.” —Guillaume Meyzenq, VP, Salomon Footwear

Watch the video here or click on the still shot below to learn The Concept and The Process behind the recyclable Salomon concept running shoe. 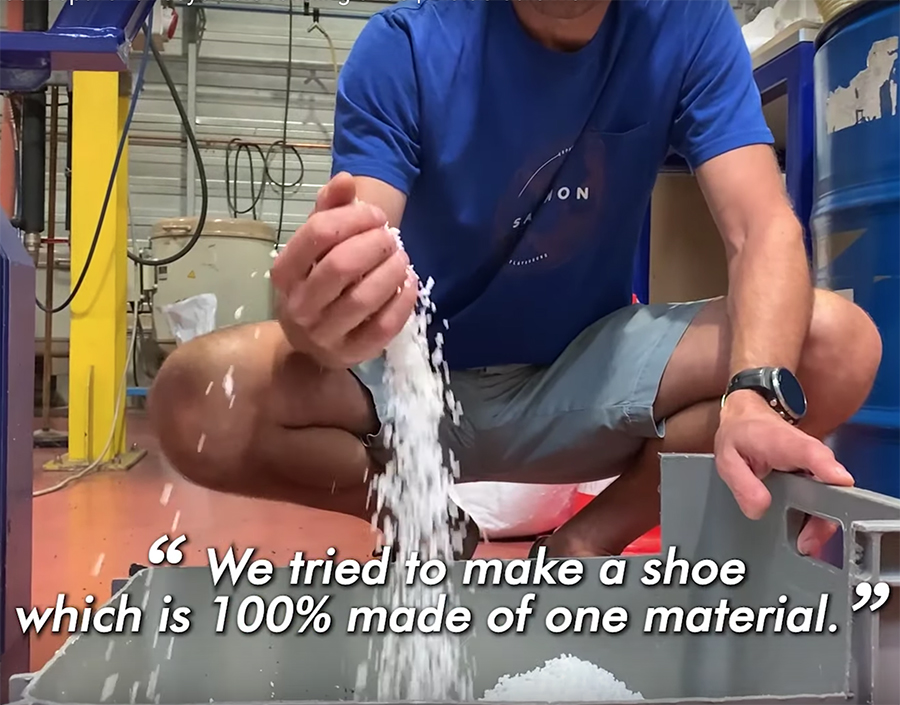 Better For The Environment
Traditional footwear manufacturing methods rely on multiple materials including the bad stuff—EVA (Ethyl Vinyl Acetate) and Rubber with the addition of Glues to join the materials making it next to impossible to fully 100-percent recycle a shoe (although some brands make the claim) because the materials have to be separated and the glue(s) extracted—which are costly and prohibitively time-consuming in the manufacturing (or de-manufacturing) process.

The Salomon concept running shoe eliminates the waste at the point where shoe creation begins and whereby every element is utilized at the drawing board to reincarnate a shoe into a new product.

Performance Is Not Compromised
To ensure that the upper of the shoe is breathable to run in, Salomon engineers relied on two types of thermoplastic polyurethane (TPU). One has an extremely lightweight, almost transparent appearance. The bottom unit offers cushioning that the brand believes performs better than the EVA foam currently being used in most running footwear.

“As a leader in running and the largest ski boot manufacturer, this is a unique Salomon solution to footwear sustainability that extends the life-cycle of the materials used by up to ten times and drastically reduces the effect on the environment. Our work is always evolving in this area and it will be a never-ending journey, but this is an exciting step forward that will help us find solutions in the future.” —Guillaume Meyzenq, VP, Salomon Footwear.