David Sharp, president and chief executive officer, commented, Following a strong first half of the year, our sales growth moderated during the third quarter. We believe consumer interest in our innovative product lines remains high; however, sell-through was hampered by a warm, dry September across much of the U.S. In addition, our wholesale dealers are now buying closer to their need which is shifting sales for our insulated and waterproof cold weather boots into the fourth quarter. With regard to Creative Recreation, we experienced improved results as the business has started to benefit from the supply chain initiatives weve implemented over the past several months and we are optimistic the brand will contribute to profitability in the near future. We remain confident that our diversified brand portfolio, innovative product strategies and multi-channel distribution will drive consistent growth and increased shareholder value over the long-term.

Gross margin in the third quarter of 2014 was $24.3 million, or 33.4 percent of sales, compared to $22.7 million, or 32.4 percent of sales, for the same period last year. The 100 basis point increase was driven by higher wholesale margins which were attributable to improved operating efficiencies in the companys owned manufacturing facilities. This was partially offset by lower retail gross margin in our B to B business than a year ago resulting from the completed transition to a web based retail platform which carries lower gross margin and lower operating expenses compared to the previous mobile store structure.

Selling, general and administrative (SG&A) expenses were $19.4 million, or 26.6 percent of net sales, for the third quarter of 2014 compared to $18.3 million, or 26.1 percent of net sales, a year ago. The $1.1 million increase in SG&A expenses was due to the additional expenses associated with the Creative Recreation brand, which was acquired in December 2013, partially offset by a $0.4 million decrease in SG&A expenses associated with the companys legacy brands. 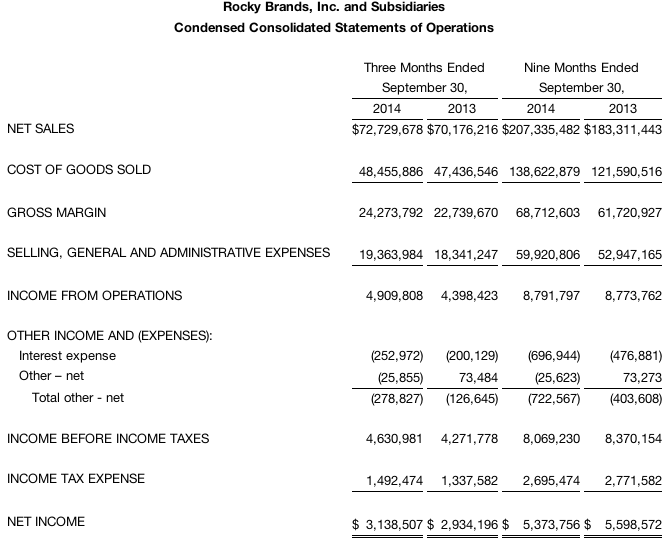