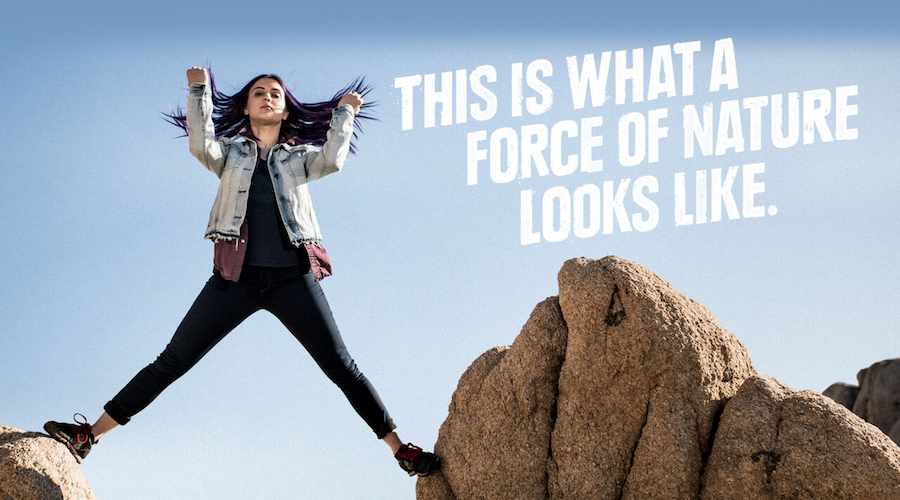 Outdoor co-op REI today launched a comprehensive effort to advance gender equity in the outdoors, encouraging millions of its members to embrace the outdoors as “the world’s largest level playing field.” From gear to experiences and from nonprofit partnerships to powerful women-first storytelling, Force of Nature aims to ensure that women are just as inspired and equipped as men to embrace life outside. Force of Nature features four components: a comprehensive effort to change the male-dominated imagery of people in the outdoors; a $1 million commitment in 2017 to support nonprofits that create opportunities for women in the outdoors; a stepped-up effort to develop and offer high-quality technical gear and apparel for women; and the launch of over 1,000 events designed for women, beginning May 6.

Force of Nature is a public-facing effort that builds on nearly eight decades of REI work to create more access to the outdoors for women. The co-op has a balanced leadership team. Women hold more than 40 percent of senior leadership roles, including the current chief financial officer, chief information officer, and the heads of human resources, merchandising and strategy. One third of the REI board of directors are women.

REI board chair Cheryl Scott, said, “The leaders of REI have been pushing to change the way things are done in the outdoor industry since I got on the board 12 years ago. This moment makes me proud to serve REI because it’s not about putting women above men – it’s about creating equal opportunity and levelling-up in areas where there are still obvious gaps. I hope millions of REI members will embrace this because more balance outdoors means our kids, our families and our society will benefit.”

The full blog post by Stritzke reads as follows:

At REI Co-op, we believe 2017 is going to be a landmark year for gender equity in the outdoors.

I’m writing to you today because we believe the outdoors is—and should always be—the world’s largest level playing field.

But when we take an honest look at the outdoor stories we tell and the heroes we typically herald, we see that as an industry, we are not championing women and men equally. A casual look at any portrayal of the outdoors—movie, magazine, catalog, store, bookshelf—shows male imagery, heroes and stories. This doesn’t honor or accurately depict the important role that women play in the outdoors. As the saying goes, “You can’t be what you can’t see.”

This year we commissioned a national study and the results showed something we’ve long believed: More than 85 percent of all women surveyed believe the outdoors positively affects mental health, physical health, happiness and overall well-being, and 70 percent reported that being outdoors is liberating.

But there are striking obstacles in the learnings as well:

We believe we can do better and that the time is now.

Today we proudly launch a public effort called Force of Nature. It is a disruption of the status quo. It claims the outdoors as a place to opt out of cultural pressures to conform—the “supposed-tos” and “shoulds” that underpin outdated stereotypes—especially for women. To create real change right now we are putting women—of all ages, races, sizes, gender expressions—front and center in all we do.

I know that I stand in a privileged place. Because of that, I believe I have a platform and a responsibility to speak out. I believe it’s important for every leader, regardless of gender, to raise a voice on this topic because together we set the tone to create positive change.

Together, the women and men of REI Co-op are putting our voice, our energy and our passion into this effort. Force of Nature builds on decades of work we have been doing within the co-op to advance gender equity.

So here’s the REI plan:

We’re putting women first for the rest of the year. We’re starting with the stories we tell. In May, we’re partnering with Outside magazine on their first-ever all-women’s issue, and in the fall, we’re hosting a film festival focused on women in the outdoors. Look for stories about women adventurers, makers and rule breakers in our marketing, social media content and here on the Co-op Journal.

You’re looking for a crew. On May 6, we’re kicking off more than 1,000 events designed to get women outside. We’re also offering hundreds of REI Outdoor School classes, 19 new REI Adventures trips and three REI Outessa retreats—immersive, three-day outdoor adventures that connect the outdoor community—all designed for women and girls.

We hear you. Through the years, gear designed for women has improved, but there is still a gap between the quality of men’s and women’s gear. We are partnering with brands to increase focus on building world-class gear designed for women. We’re also working hard inside our own co-op brands and with vendors to offer expanded extended sizing options.

We can’t do it alone. That’s why we’re committing $1 million to support community organizations that are already doing great work to create opportunities for women and girls in the outdoors. Roughly $500,000 will support organizations like Camber Outdoors, GirlTrek and the YMCA’s BOLD/GOLD initiative. In May, we’ll be  launching a new $500,000 “Force of Nature” fund, available through an open-call submission process, for organizations that join us in our commitment to make outdoors the world’s largest level playing field.

Today is a milestone in our decades-long journey creating access to life outdoors for all.