REI To Close On Black Friday For Fifth Straight Year 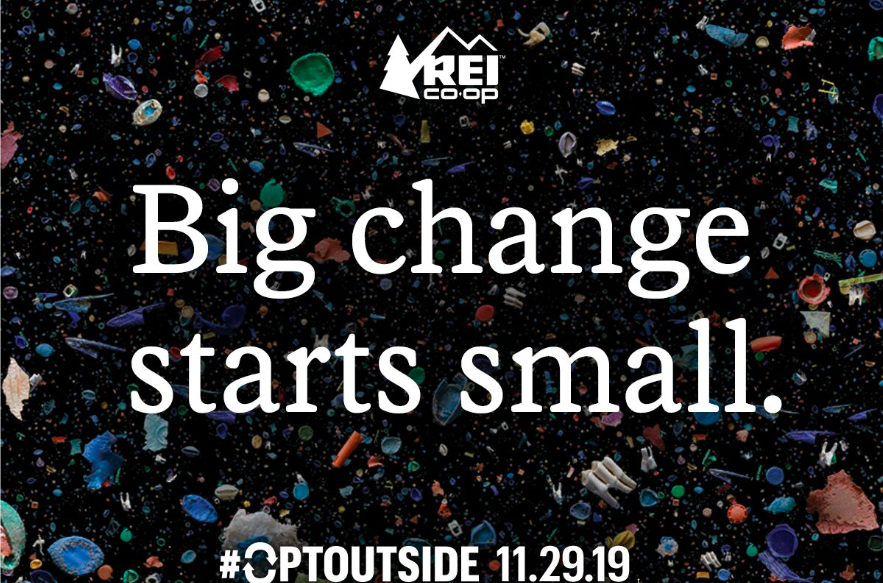 For the fifth time this Black Friday, REI Co-op will close all its stores, process no online payments and pay all 13,000 employees to #OptOutside with friends and family. But this year, under the leadership of a new CEO and facing a global environmental crisis, the co-op is going a step further: asking its 13,000 employees and 18 million members to join in the fight for life outdoors – and life on this planet.

The co-op is asking members and employees to “opt to act” – joining a nationwide clean-up effort this November, leaving the outdoors better than they found it when they #OptOutside on Black Friday and signing up for an employee-sourced, 52-week action plan to take small steps throughout the year to reduce their environmental footprint.

At the same time, REI is stepping up its own fight for life outdoors – starting with rethinking its core business model in favor of more mindful consumption, tackling waste and pledging to eliminate unnecessary packaging in the outdoor industry – beginning with poly bags (the clear plastic bags used to protect apparel).

“My job is to steward the co-op, and the outdoors, on your behalf — and on behalf of the generations who follow us. Today, that future is at risk,” REI CEO Eric Artz wrote in a letter to co-op members this week. “We are in the throes of an environmental crisis that threatens not only the next 81 years of the co-op, but the incredible outdoor places that we love.”

The co-op first launched #OptOutside in 2015, inviting employees and members to look at the Black Friday in a new light. Five years later, a single moment – the choice to close every REI store on the biggest shopping day of the year, pay employees to spend the day outdoors with friends and family and encourage Americans to think more deliberately about their consumption habits – has grown into a movement. But in 2019, Artz says that’s no longer enough.

“As a single company, our impact is limited, but as a community, we can drive change that powers meaningful action beyond our walls,” Artz wrote. “As a co-op, we know that many people taking many small steps together can add up to big changes. Collective intention will drive collective impact.”

To power that change, the co-op is committing to a future based around a circular economy, working toward zero-waste operations and challenging the outdoor industry to eliminate unnecessary packaging. Read more about these commitments, as well as a letter from Artz here.

This spring, REI announced a major expansion of its rentals and used gear businesses, both in service of today’s consumers, who are increasingly looking for alternatives to owning, and the co-op’s belief that one of the most impactful ways to lower a product’s environmental footprint is to maximize the numbers of times it can be used. By the end of 2019, an estimated 300,000 REI members will have shopped for used gear.  This fall, REI will continue to invest in its commitment to the circular economy by inviting 5,000 members to pilot a used gear buy-back program – in which members may receive REI gift cards when they trade in gently used outdoor items for resale at REI.com/used; debuting a seasonal ski rental offering for kids and adults; and testing out a new online rental reservations system that we plan to roll out more broadly in 2020 – making it much easier for customers to reserve the gear they need for their outdoor adventures.

For many years, the co-op has been working toward a 2020 goal of operating as zero-waste (diverting 90 percent of waste from landfill). While REI has made significant progress, challenges like changing recycling markets and variable infrastructure from city to city mean the co-op will not meet its 2020 goal in every store.

The co-op has worked hard to increase its recycling rate to 76 percent across its operations—in headquarters, distribution centers, and stores. The remaining 24 percent of waste is a challenging mix of everything from the silica packets that come with apparel items, to the plastic poly bags these items are inevitably wrapped in, to the paper towels in some buildings’ restrooms. Waste is created at virtually every touchpoint, and to-date, no U.S. retailer has figured out how to achieve zero-waste operations in all retail stores.

REI is working toward an updated goal of operating as zero-waste (diverting 90 percent of waste from landfill) across its total operations by the end of 2020. Additionally, by the end of 2021, REI will certify its headquarters, all its distribution centers and at least 10 REI stores as TRUE Zero Waste facilities. The co-op has committed to sharing what it learns on its journey to zero-waste, and helping other retailers figure it out, too.

The co-op is also working with Subaru of America to help members recycle hard-to-recycle items like snack wrappers, bike tires/tubes, yoga mats and tents; and is partnering with the Leave No Trace Center for Outdoor Ethics and United By Blue to invite members to join one of 11 clean-ups around the country taking place throughout November. Next, REI will solicit member feedback for what else it should take on, via REI’s digital community, Conversations.

Challenging the Outdoor Industry to Eliminate Unnecessary Packaging – For Good

Of REI’s current waste stream, over 20 percent is made up of thin-film plastic like polybags (the clear plastic bags used to protect apparel). REI Co-op brand apparel has transitioned away from the use of individual polybags for most items, but many brands still use them for each item. These bags are rarely recyclable at the stores, and contribute to the generation of more than 7 tons of thin-film plastic waste per week that REI is determined to eliminate.

By the end of 2020, REI employees and customers will see a substantial reduction in polybags. The co-op will hold its own brand to the continued avoidance of polybags and work with its brand partners to reduce the use of unnecessary plastic packaging too.

REI has actively pushed itself to raise the bar on sustainability for decades, through efforts like sourcing 100 percent green energy for all operations, pursuing zero-waste operations, and pushing the outdoor industry to dramatically raise the bar on product sustainability through first-of-their-kind product sustainability standards. But a single company can only do so much. That’s why the co-op is also inviting its 18 million members, more than 13,000 employees, and the broader retail industry to take up the fight.

“At REI, our purpose is clear – to awaken a lifelong love of the outdoors, for all. We believe that if we get millions of people to love the outdoors, they will leave it better than they found it,” says Artz. “Because when the next generation asks us what we did when the outdoors and the world needed us most, I want to be able to say, “we did our best.”