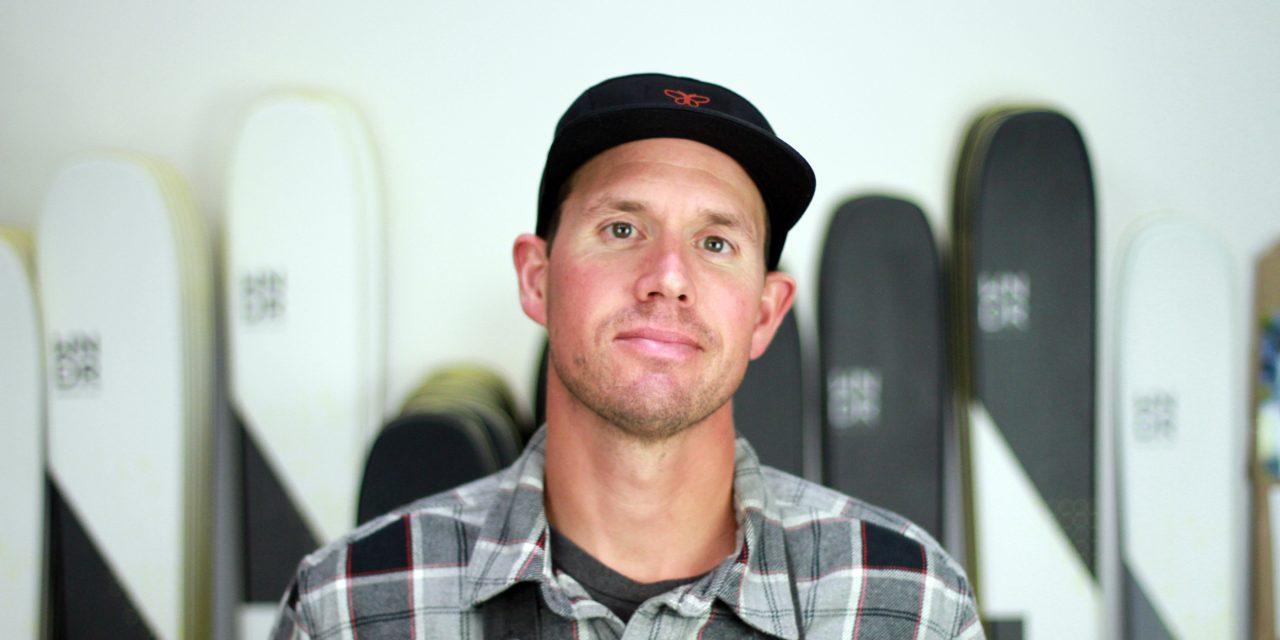 Matt Sterbenz, founder of WNDR Alpine, a manufacturer of eco-friendly biotech is using material derived from microalgae in its backcountry skis.

Based in Salt Lake City, UT the company was founded in 2019 under the umbrella of Checkerspot, a materials company that specializes in next-gen polyurethanes, textile coatings and finishes. Last year, WNDR dropped its Intention 110, the first ski to include algae as a core ingredient, and won the Sports and Rec category for Fast Company’s 2020 Innovation by Design Awards. WNDR recently added its Vital 100 to the mix as it debuts its first DTC sales model this fall.

With a supply chain that starts in Berkeley, CA, where Checkerspot grows microalgae-derived oils instead of petroleum-based ones, the algal oil is converted into a rigid material that then gets machined, profiled and shaped into skis. The material has a better strength-to-weight ratio, torsional stiffness, dampening, and stability than petroleum-based products, according to the WNDR.

Sterbenz moved to Squaw Valley after graduating from the University of Minnesota in 2000 to become a professional Slopestyle skier. After several appearances in Aspen’s X Games, he founded 4FRNT Skis, which sold 16 years later. In 2018 Sterbenz joined Checkerspot as GM of Wintersports, creating its Design Lab focusing on using molecular biology to source materials; he then founded WNDR Alpine, its first consumer brand and exclusive manufacturer of WNDR Alpine skis.

He shared his take on bringing microalgae to the ski market with SGB Today.

How did you come up with the idea of using algae in a ski? Checkerspot is an advanced materials startup that set out to work with microalgae from its founding in 2016. Microalgae is an incredible organism, as it yields a high amount of oil, grows extraordinarily quickly, and offers a lot of flexibility in what we can create, as we can control its output through biology and chemistry. In short, it provides a renewable source of oil that can be used to create purpose-built materials that never could have been built from petroleum.

Why is it good for skis? The ski industry is historically underserved by materials suppliers, meaning that builders have typically never had the opportunity to source materials that are purpose-built for the end application of skiing. Backcountry skiing in particular puts a lot of demand on designers. Skis must be light enough to tour on, yet stable and predictable in a wide range of conditions. All of these demands make backcountry skiing a perfect product category to revolutionize through new, better-performing materials.

How good for the environment is it compared to other materials? Compared to petroleum-based materials like ABS, it’s lower impact and higher performance. They’re sourced from microalgae – a renewable, biological origin that can produce oil within a matter of days. And our manufacturing process focuses on waste reduction. The Algal Wall is poured as a liquid into a channel in the ski’s side, meaning almost no waste compared to traditional ABS plastic, which has to be trimmed to size. Our materials are 60 and 41 percent bio-based, respectively, far greater than the 0 percent of incumbent materials.

The Alpine market isn’t necessarily growing. How hard has it been to break in? While the Alpine market as a whole isn’t necessarily growing, backcountry is. The greatest challenge is that there are already a lot of brands in existence working to differentiate themselves. Bringing algae-derived, performance-boosting biomaterials to the table is a strong and unprecedented differentiator that has served as a major advantage in gaining a foothold in the market.

Why didn’t you introduce it at 4FRNT? Materials were never the play when I started 4FRNT. At that time, I was most motivated to revolutionize the shapes of skis. We had always aspired to build skis as good as the best of them but in progressive new geometries. This principle still rings true with how the brand has progressed in recent years, which I’m very proud of. When it came to pioneering an application for Checkerspot’s first-of-their-kind polyurethanes, it seemed obvious to create a brand with materials innovation at its core.

What other applications is algae is suited for? Algal oil can be used to replace many petroleum-based products, from lubricants to fuels and textile coatings. It can also be used to create materials that petroleum can’t due to the flexibility of using a biological resource. There are countless strains of microalgae in existence today, and the science we’ve developed allows us to explore the diverse possibilities some of these strains offer. WNDR Alpine currently utilizes just a few polyurethanes, so there’s lots of room to expand its use as we diversify our product offerings.

Would you call algae a game-changer? Absolutely, especially in terms of the variety of products and materials it can improve and create. But more so than algae, it’s cutting-edge biology, chemistry and material science that give us access to completely new inputs. As consumers, we’ve grown dependent on the performance our gear offers. Cutting-edge petroleum-based chemistries have historically propelled this wave of innovation, but we’re running out of options that haven’t been tried before. At the end of the day, nature is the ultimate chemist. The trick is tapping into its abundance; until now, we haven’t had a means of doing that.