Developed by Skinners Technologies, new Skinners shoe socks represent a completely new type of footwear designed for travel and sports enthusiasts. The patented minimal shape combines the comfort of socks with the essential protection of a shoe, creating the feel of a  “second skin.” Skinners can be used as primary footwear for countless activities, either outdoor or indoor. 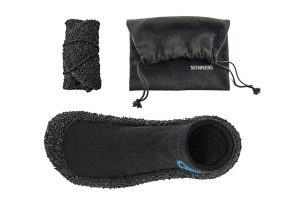 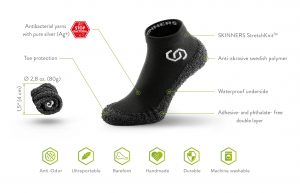 Skinners are the perfect cozy camp slipper or après-hike shoe. They could be used for heading to the gym, running to the market, resting on a transatlantic flight, or water use for SUP, Surf, beachgoers and anglers.

This new lightweight shoe sock consists of seamless antibacterial StretchKnitTM with a thin yet resistant underside coated with anti-abrasion Swedish polymers. Despite its 2mm thickness, each pair is engineered to last approximately 650 km (400 miles) and will easily stand up to being laundered in the washing machine. They are manufactured in the Czech Republic using patented waste-free technology.

Skinners ultraportable shoe socks are the recipient of the prestigious Red Dot Design Award. Out of 5,500 projects, a jury of 39 professionals granted Skinners one of the major awards for innovative design, high quality, and functional properties.

“We wanted to create footwear that is compact, comfortable, and protective at the same time a kind of a Swiss Army knife among shoes—footwear you can literally put in the pocket and use when needed. Wearing Skinners also thoroughly activates your feet muscles and tendons, leading to more effective training,“ explains Petr Prochazka, the inventor of Skinners and CEO of Skinners Technologies.

The sock shoes are not here to replace specialized footwear, but to compensate what the feet lost by frequent use of it. “We’re not saying runners should throw away their $150 shoes and start running in Skinners once and for all. Skinners are meant to be used occasionally as a training tool on soft surfaces to better understand how the body works and to increase proprioception” shares Prochazka as one of the use cases.

Whether it´s moving around the camp after a hike, giving feet a rest, heading to the gym or using them for shorter runs, even water used for ocean floors and angling, users of Skinners benefit from its unique design. The lightweight sock shoe consists of the seamless antibacterial StretchKnitTM and thin, yet resistant underside coated with anti-abrasive Swedish polymers. Despite its 2mm thickness, every pair lasts around 650 km (eq. 400 miles) and can be easily washed in the washing machine without any fear of disintegrating.

Since late 2016, the company, without any external investors, sold more than 150,000 pairs of Skinners to customers in 120 countries worldwide. 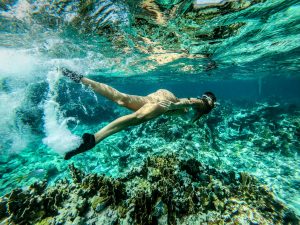 About Skinners: Handmade in Europe,  Skinners were developed in 2015 by Petr Prochazka. Prochazka’s friend injured his foot and could not wear regular shoes for a planned trip. Prochazka took a travel sewing kit and created the first prototype of the revolutionary lightweight footwear. Two years later, the proprietary blend of comfort and technology in Skinners was launched to the world via a Kickstarter crowdfunding campaign. In just 44 days, customers from all over the world pre-ordered more than 17,000 pairs, making Skinners the most successful footwear project in crowdfunding history. youtube.com/watch?v=u_pe6qAhz5U.