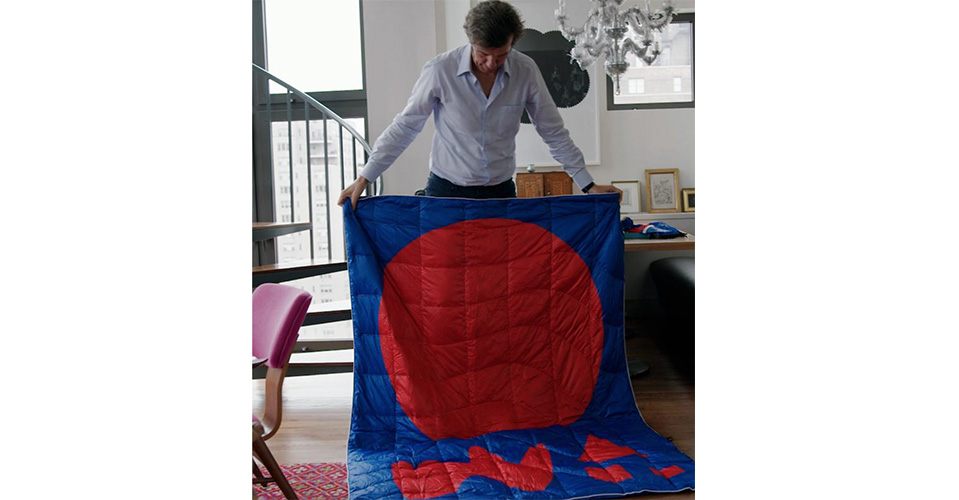 Wylie Robinson, Rumpl’s CEO and founder, was introduced to Stefan Sagmeister, the Austrian artist, typographer, and graphic designer, nearly a decade ago while attending an extension class at The University of California. Sagmeister’s work has graced album covers for The Rolling Stones and the Talking Heads, and he has won Grammy Awards for his designs.

Rumpl has collaborated with Sagmeister on a designer for one of its blankets. The product is based on a research project by Sagmeister aimed at finding universal agreement on beauty.

“I filled out the generic contact form on Sagmeister’s site thinking it was unlikely that I’d hear back,” said Robinson. “I shared with him my background in design and admiration of his work. I introduced him to Rumpl and told him that we’d be honored to work with him on a project and support a cause of his choosing. Sagmeister responded promptly to my message. It was both inspiring and humbling to have one of my favorite designers be so approachable.”

The message morphed into an email thread. The digital dialogue became a conversation and now the conversation is a collaboration.

Rumpl has launched its Stefan Sagmeister Beautiful Shapes Down Puffy Blanket. The artwork that Sagmeister selected is the result of an intensive research project where he and his team “sought out the truths about beauty.”

“We started doing this research to find universal agreements on beauty as a response to the worst thing that ever happened to beauty—it’s repeated by everybody around the world: ‘Beauty is in the eye of the beholder.’ That really killed beauty. If that were true, it would make no sense for a designer or architect to pursue beauty. That really brought us into the research, and it turns out that there are universal agreements on beauty. We basically gave [our Instagram followers] a bunch of shapes and asked them, ‘which of these shapes do you think is most beautiful?’ In every culture, the circle won. And, in every culture around the world, the rectangle came in last. That dictated the design of the blanket,” said Sagmeister.

The Beautiful Shapes Down Puffy Blanket is made with 600-fill duck down, 30 denier ripstop polyester fabric and is water repellent and blurs the line between indoor comfort and outdoor performance.

“I think it’s a wonderful thing to be able to create something that lives in people’s lives,” said Sagmeister. “We are very big fans of going for picnics. On Saturdays and Sundays, my girlfriend and I take The New York Times and drive somewhere where there’s a good view. We put out a big blanket and have a picnic. It made a lot of sense to design our own picnic blanket for our outings. That was my main motivator with Rumpl.”

All the design fees from this project will go to the High Line Organization in New York City.