SAN DIEGO- Remedy Public Relations, one of the leading PR firms in the active-outdoor lifestyle space, has won the prestigious Gold Medal in the Bulldog PR Awards Consumer Product Launch category for the PR program built to support SPY’s Ace EC snow goggle. The Bulldog PR Awards, which rank the most outstanding PR and communications campaigns in the country, is the only national public relations contest judged exclusively by working journalists. The judges evaluate the entries based on creativity, originality, strategy, execution, and results. 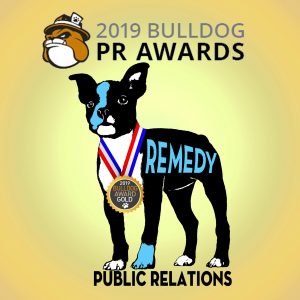 The award entry, “Visualizing The Competition – The Launch Of The SPY Ace EC Goggle,” highlighted the creative PR programming utilized to maximize budget, a candid approach to media relations, and fluidness in overcoming time challenges.

Remedy and SPY were granted the impressive accolade for the strategies and tactics implemented in positioning the Ace EC goggle ahead of its competition prior to the inaugural Outdoor Retailer + Snow Show in Denver, the largest event of its kind in the active-outdoor lifestyle industry. While SPY’s Ace EC goggle was groundbreaking in nature, its debut coincided with that of similar products from major competitors. In addition, a product with an identical idea, but noted shortcomings, was brought to market just a few years prior.

“Great PR programs aren’t developed in a bubble. The campaign we created with SPY that won the Bulldog PR Gold Medal was truly a team effort on both sides and developed with a full 360-degree look at the challenges we faced in a very competitive landscape. SPY treated the Remedy team as true partners for their launch, resulting in a trophy case of awards, and a nearly countless level of impressions,” commented Bill Byrne, Director at Remedy PR.

SPY received more than five major media awards during Outdoor Retailer as a result of the campaign for the Ace EC goggle, with widespread media coverage ranging from leading technology websites to general consumer outlets following after. The organizers of the Bulldog PR Awards have stated that this year’s program received a record-breaking number of entries, making the Gold Medal win for Remedy and SPY even more meaningful.

The Bulldog PR Awards are produced by Bulldog Reporter, which has been providing news, best practices, and insights to PR and communications professionals since 1980. The Bulldog Reporter email newsletter features compelling articles, along with timely updates about media moves and agency news.

Remedy PR is based in San Diego, with team members in Los Angeles, New York, and key markets across the U.S. With experience in industries that include the active-outdoor lifestyle, consumer tech, finance, and craft beer, Remedy offers brands a unique combination of creative PR strategy, backed by realistic thinking and a history of proven results. Remedy pioneered the idea of the public relations audit, what it calls the PR Checkup, which can help brands assess the value of their current public relations programs. The goal of Remedy’s PR Checkup is designed to help brands evaluate the strengths and weaknesses of their current public relations program, recommend potential changes if appropriate, and in some cases, also offer assurance that their existing PR program is delivering a great value for the level of resources being devoted.

About Remedy Public Relations: Remedy PR is a collaboration of senior communications strategists, headquartered in San Diego, with associates across the country. Well versed in the worlds of traditional PR, influencer marketing, thought leadership, and social media, the Remedy team brings brands unique communications solutions by presenting programs that are creative, realistic, and results oriented. More information on Remedy can be found online at RemedyPR.com.