Osprey announced its sponsorship of record-breaking mountaineer Nimsdai Purja MBE as he attempts to climb K2.

K2 has earned the reputation as the “Savage Mountain” with winter bringing a whole new level of danger and challenge. The K2 remains the only 8000m peak unclimbed during the winter season. 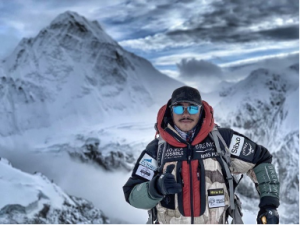 “I’m thrilled and grateful to once again be partnering with Osprey for my upcoming K2 Winter project,” said Nimsdai. “The whole team at Osprey has been incredibly supportive throughout my climbing journey so far. I’ll be representing them with pride on my next big mountaineering expedition, making the Impossible Possible together.”

Since 2019, Nimsdai has been an Osprey sponsored athlete including the brand’s support of “Project Possible”, his summit of the world’s 14 highest mountains in six months and six days, to smash the fastest time of eight years.

Nimsdai will haul his gear from the UK to Pakistan in Osprey’s Transporter series expedition-style duffel packs featuring water-resistant materials.

“Last year we saw climbing history by Nimsdai,” said Jonathan Petty, managing director, Osprey Europe. “We are proud once more to support this mountaineer on his toughest challenge yet: K2 Winter. This climb is one of the greatest mountaineering challenges but one that Nimsdai, with his sheer determination, mental and physical strength, can accomplish.”