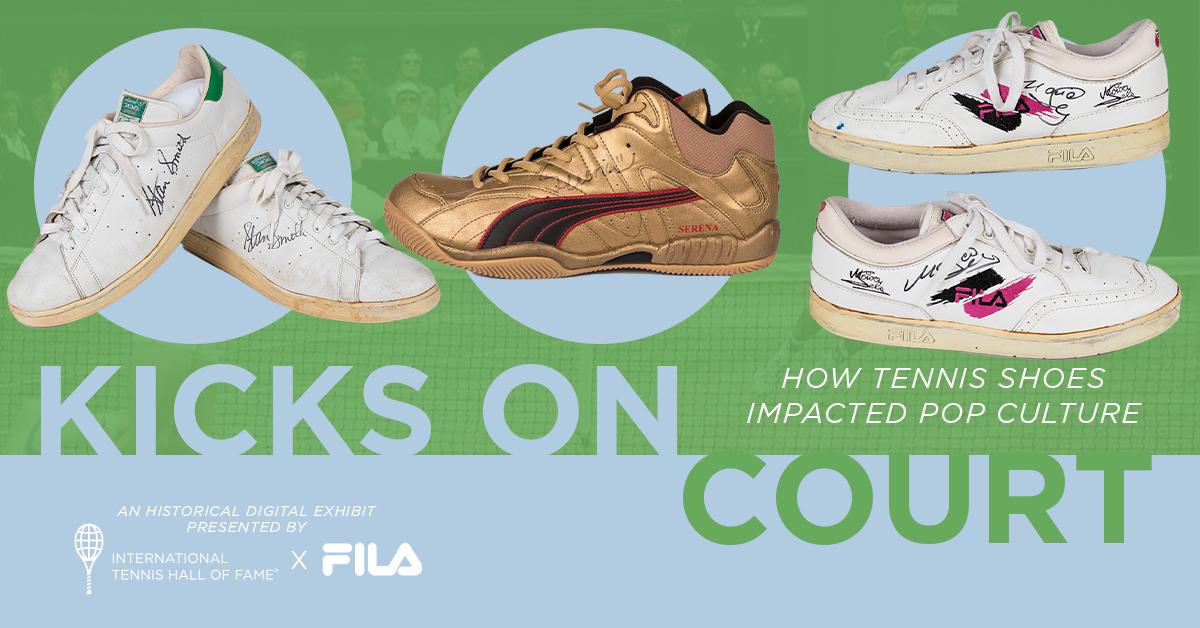 The International Tennis Hall of Fame has launched a new digital museum exhibit exploring the evolution and impact of tennis footwear, as seen on and off the tennis courts over the past 100+ years.

Kicks on Court: How Tennis Shoes Impacted Pop Culture is an historical digital exhibit presented by the International Tennis Hall of Fame and Fila. The exhibit utilizes the Hall of Fame’s vast museum collection of tennis footwear to showcase its evolution, the personalities who have been integral to some of the sport’s great sneaker stories, and tennis footwear’s noteworthy influence into music, off-court fashion, and pop culture.

Production of the historical digital exhibit was supported by Fila, a long-time partner of the International Tennis Hall of Fame and an iconic brand in the tennis apparel and footwear space that celebrates its 110th Anniversary this year.

The exhibit is authored by Gerald Flores, former editor-in-chief at Sole Collector and a noted sneaker authority.

“A deep dive into the International Tennis Hall of Fame sneaker collection and researching sneakers in tennis history was a fascinating experience for me, and I hope the same will hold true for visitors to the digital exhibit. Not only were the featured shoes integral parts of great moments in sports history, but they also shaped so much culture that is part of our lives today – endorsements, casual fashion, music, and more. It’s a very intriguing topic to explore.”
– Gerald Flores, Kicks on Court author

Through an engaging timeline approach, Kicks on Court chronicles how tennis footwear has evolved from ankle boots for women and loafers for men in the late 1800s to the introduction of rubber soles in the 1930s to Open Era innovations designed to enhance performance.

Visitors to the exhibit can zoom in to see special details on the historic shoes, such as the floral and sunshine doodle art on Monica Seles’ Fila 2As that was reminiscent of her personality or Stan Smith’s signature on the adidas Stan Smiths or the show-stopping gilding on Serena Williams’ golden Pumas.

Kicks on Court: How Tennis Shoes Impacted Pop Culture
Key moments of tennis history are highlighted through featured footwear such as Chris Evert’s signature Converse that are still dusted in red clay picked up en route to trophies at Roland-Garros; and the spikes that Rod Laver donned at the 1969 US Open to power through slippery grass courts to clinch his second calendar-year Grand Slam.

Additionally, the exhibit explores how the infusion of endorsements by athletes like Monica Seles and Jennifer Capriati for Fila, Billie Jean King and Stan Smith for adidas, and John McEnroe and Andre Agassi for Nike transformed the business of selling sneakers and fueled skyrocketing sales.

Kicks on Court also showcases notable crossovers of tennis footwear in the worlds of fashion, music, entertainment, and pop culture. The exhibit highlights how tennis shoes by Fila and adidas have been embraced as signature styles by hop-hop artists and other entertainers. It also explores high fashion crossovers like Maria Sharapova’s Nike and Riccardo Tischi collaboration, among other runway worthy creations.

In celebration of the new exhibit, the International Tennis Hall of Fame will be auctioning off a pair of one-of-a-kind sneakers inspired by one of tennis’ most influential fashion icons. The design was created by artist Paul Lempa, who has hand-painted an ITHF and Fila inspired work of art, utilizing a pair of Fila Original Tennis LX men’s sneakers as his canvas.

The sneakers will be revealed on the International Tennis Hall of Fame’s social media channels on Wednesday, April 28 and will be put on auction on charitybuzz.com on the same day. Proceeds of the auction will benefit the International Tennis Hall of Fame in support of the non-profit organization’s programs to preserve and promote tennis history, celebrate its greatest champions, and inspire the future of the sport.

Additional digital museum exhibits on unique elements of tennis history produced by the International Tennis Hall of Fame include Courting Fashion; Tins, Cans, and Cartons; Smash Hit; Breaking the Barriers, and more, all accessible via tennisfame.com/digitalexhibits.