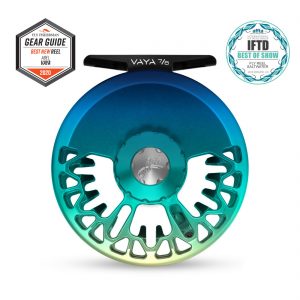 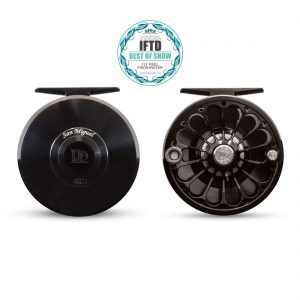 The annual IFTD show boasts more than two thousand attendees and hundreds of retailers from across the globe. The coveted IFTD New Product Showcase Awards are only given to select products in a range of thirty different categories. Abel, known for its legendary reliability and high-end finishes, was awarded “Best Saltwater Reel” for its VAYA reel, which launched earlier this year. Ross Reels, was awarded “Best Freshwater Reel” for its all-new San Miguel reel, which launches in December.

“We’re honored to take home both IFTD New Product Showcase Awards in the reel category for 2019,” said David Dragoo, President of Mayfly Outdoors.  “We are grateful for our amazing team, as well as the media and dealers that recognized our hard work and products by choosing us to receive these awards.” The awards continue an impressive run for Mayfly. There are only two possible awards in the fly reel division with the saltwater & freshwater categories, and the company has now received 7 out of the last 8 total awards going back to the year 2016.

Mayfly outdoors recently moved into a new 41,000-sq.-ft. facility as part of Montrose’s Colorado Outdoors project, a community-minded development. Not only does the company manufacture world-renowned fly-fishing products, but the brand is also supportive of the community and outdoor industry, through local conservation efforts in Montrose. In December 2018, Mayfly proudly donated more than $800,000 in property back to Montrose, of which included nearly 1.5 miles of riverfront land and about 1.8 million-sq.-ft. of wildlife and fishing habitat.

About Mayfly Outdoors: Mayfly Outdoors is a Colorado-based outdoor products company founded in Colorado Springs, Colorado. Mayfly subsidiaries operate under various brand names including Abel and Ross Reels. Combined, these businesses are the recipients of more industry “Awards in Excellence” for innovation, dependability and performance than any other fly-fishing tackle manufacturers in the world. More information can be found at mayflyoutdoors.com