A study reported by PHIT America and looking at students in Naperville, IL revealed math and reading test scores are better after a P.E. class.

“A number of studies indicate that one of the most important classes in school is physical education because of the powerful academic benefits,” said Jim Baugh, founder, PHIT America.  “Sadly, 48 percent of U.S. schools have no P.E. classes for their students. That trend must be reversed.” 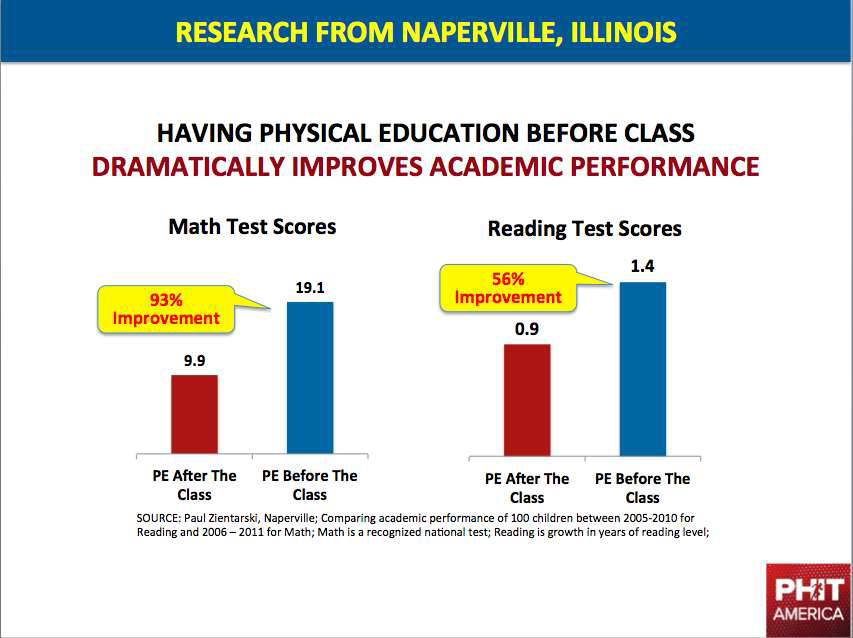 He continued, “What’s good for kids has to be good for adults, too. Getting active in the morning wakes up the brain and gets the brain ready to learn, be productive and improves concentration.”

PHIT’s findings complement the work done by Apryl Krakovsky, founder of My School in Motion, who has implemented a program in more than 30 U.S. schools, affecting some 11,000 students, which involves exercising in the morning for increased productivity.

The Academy for Enriched Sciences is one of many schools around the U.S. that is now getting its students physically active before school begins.  This is not the first program or study to find morning exercise can increase focus.

A study reported in Preventative Medicine Reports concluded that students’ attention span and focus are enhanced when they begin their school day with exercise or a group physical fitness activity. Another similar study performed at Arizona State University revealed that the biggest academic improvements for students who are physically active is noticed during the first 45 minutes after the exercise experience.

Krakovsky is seeing the results beyond the classroom as well. “I have hundreds of emails from parents telling me of the positive impact the morning program has had on their kids’ attitudes toward sports and exercise,” he said.