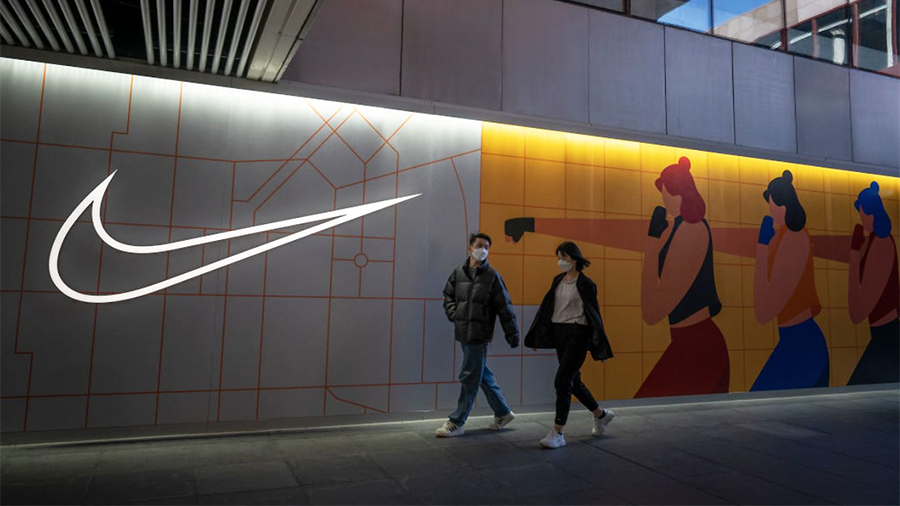 On Wednesday, Morgan Stanley and UBS joined several other investment firms recently lowering their price targets on Nike due to the impact of COVID-lockdowns in China and the overall stock market’s correction.

Nike will report its earnings for the fiscal fourth-quarter ending in May after the close on June 27.

Morgan Stanley on Wednesday kept its “Overweight” rating while slashing its price target to $159 from $192.

In a note, Morgan Stanley analyst Alex Straton said the longer-than-expected, COVID-related China lockdowns that began in March would likely result in Nike missing its implied guidance for its fiscal fourth quarter, calling for low-single-digit growth.

Morgan Stanley now expects a 5 percent quarterly decline, worse than recently-updated sell-side consensus forecasts calling for a 1 percent decline due to concerns about the drag from China.

With the updated sales target and slightly lower gross margin target due to fewer sales than expected from China sales and higher-than-expected freight expense, Morgan Stanley now expects 72 cents per share for Nike in its fourth quarter, down from a previous estimate of 84 cents and Wall Street’s consensus target of 84 cents.

Straton said Nike’s recent stock weakness could indicate that the stock’s valuation feflects a fourth-quarter miss and FY23 guide below consensus. The concern, however, is whether FY23 turns into “another ‘transition’ year” before Nike can return to its long-term growth targets.

Straton wrote, “We continue to believe COVID permanently accelerated NKE’s transition from a traditional wholesale business into a digitally-driven, direct-to-consumer (DTC) brand; This should lift its revenue, margin and EPS growth trajectory over time and subsequently enable multiple expansion from pre-pandemic levels.”

However, the China lockdowns “an unprecedented supply chain/macro-environment pressures could deter Nike from delivering linear progression in line with its long-term growth targets. L-T targets in both 4Q22 & FY 2023.”

Straton believes the stock’s catalysts include sequential quarter-over-quarter topline improvement in China and further evidence of the margin benefits of its DTC push in other geographies, particularly North America and Europe. Wrote Straton, “Against the upcoming guidance reset and valuation levels below pre-pandemic levels, we think current levels could offer an attractive entry point for long-term-oriented investors looking to invest in a quality asset on sale.

In a note released on Wednesday, UBS trimmed its price target on Nike to $168 from $173 but kept its “Buy” rating on the stock.

UBS analyst Jay Sole wrote that he believes Nike will likely exceed guidance when it reports earnings on June 27. Sole said they believe Nike’s FY23 guide will imply EPS in the $4.10-$4.30 range, likely clearing the market’s “bar” for the event, which, based on its conversations with investors, is under $4.

“We think better-than-expected guidance causes Nike’s 24x P/E to increase. The options market is looking for a +/- 6.4 percent jump over the event versus a 5.2 percent historical average move. We expect more volatility than 6.4 percent. The main risk is new, big China lockdowns will emerge between now and when Nike reports on June 27th. This and elevated macro uncertainty are two extra reasons we see the potential for high volatility,” wrote Sole.

The analyst went on to explain four reasons why its guidance beats expectations. These include:

“Our conversations suggest Nike’s challenges in China are widely understood, and sentiment around this issue is very low. Our sense is ‘good’ news about China will help lift a major overhang around the stock,” explained Sole.