of company-wide sales growth, but less than stellar domestic results led Wall Street to sell off the stock with a 7.8% overnight decline after Wednesdays close. NKE shares ended the week down 9.6% to close at $60.34 on Friday. Sales grew in the mid-singles for the Nike brand in the U.S. for the fiscal fourth quarter and fiscal year ended May 31, with flat domestic futures orders scheduled through November creating even more worry.


Revenues for both Nike, Inc. and the Nike brand grew approximately 16% for the companys fiscal fourth quarter, with seven points of growth from the weaker U.S. dollar.  The company reported sales growth across all four regional businesses and subsidiaries, with only the equipment business in the U.S. posting a negative.
The Nike business posted a 15.3% increase in footwear sales to $2.66 billion for the fourth quarter, while apparel sales jumped 23.9% to $1.44 billion. Equipment sales grew only 5.6% for the quarter to $286.0 million as the mid-teens decline for the U.S. offset double-digit growth in each of the other regions.
For the full year, sales growth was evenly balanced between footwear and apparel, but equipment lagged. The Nike brand posted a 14.3% increase in footwear sales to $9.73 billion, while apparel sales grew 14.4% to $5.23 billion. Equipment sales grew 9.5% for the fiscal year to $1.07 billion with U.S. declines once again offsetting double-digit growth for the rest of the world.
Sales at Nike owned-retail stores grew 14% for the fiscal year, with comp store sales increasing 3% for the period in both first quality and factory outlet stores.  The company reported investments in its e-commerce operations drove annual sales growth in excess of 30% there. Nike opened 53 outlet stores during the fiscal year as well as 17 in-line stores including two flagship stores in Shanghai and Beijing.

Management specifically called out the re-designed Running Experience at its NikeTown store in New York as posting revenue growth of 31% over the prior year.  The House of Hoops partnership with Foot Locker saw 14% sales growth since its opening with initial results from the Finish Line project described as very encouraging.

Though the domestic business as a whole saw only modest growth, results were quite a bit stronger in international markets.  International sales, which accounted for approximately 62% of brand sales for the fourth quarter, grew 25.7% to $2.67 billion from $2.12 billion for the year-ago quarter.  International backlog growth in the low-teens countered flat futures orders in the U.S. for Nike, with the implication that the company will be looking overseas for growth in the near term.
In the EMEA region, which includes Europe, the Middle East and Africa, sales grew 18.8% to $1.53 billion for the fourth quarter from $1.29 billion last year aided by the weak U.S. dollar.  Excluding the effects of currency-translation, EMEA sales grew 4.0% for the quarter.
For the full fiscal year, “nearly every country” in the region saw growth in revenues as sales to the UK grew 7% and sales to Germany increased 9%. The emerging market countries of Central Europe, Middle East and Africa were up nearly 25% for the year, driven by strong results in Russia, Turkey and South Africa.
Football (soccer) grew 19% in the region for the year on the strength of the Total 90 franchise and Manchester Uniteds play in the Champions League.  Similar to the rest of the world, apparel did well in Europe with premium and performance products in running called out as strong performers as were soccer team kits, likely due at least in part to Manchester United.
Futures orders for the EMEA region grew 4% in constant dollars, with a worrying downward trend apparent after double-digit growth earlier in the fiscal year.
“In reference to both the Eastern region and the Western region, the East continues to be a solid growth platform for us,” commented Nike brand President Charlie Denson on a conference call with analysts.  “When you get into the Western Europe, it is a little bit of a mixed bag.”
The Asia-Pacific region posted the highest growth rate of any of the regions for both the fourth quarter and fiscal year, with currency exchange rate fluctuations contributing approximately 12 percentage points and six percentage points of the growth, respectively.
In fiscal 2007, China became Nikes largest market outside of the U.S. with revenues on a constant dollar basis increasing over 50% and surpassing the $1.1 billion mark.  Growth in China was fueled by continued new store openings and investments around the Beijing Olympics.
On a currency-neutral basis, every product type reported higher revenues for the year in the Asia-Pacific region, and half the countries reported double-digit sales growth.  In Japan, currency-neutral revenues for the full year grew at a low-single-digit rate, as growth accelerated to about 6% in the fourth quarter.

For the fiscal year, pre-tax income for the region grew 36% to $693 million, as revenue growth, higher gross margins and overhead leverage more than offset investments in demand creation and China infrastructure.
Revenues in the Americas region also passed the $1 billion mark for the first time, growing 21% for the full year to approximately $1.15 billion. On a currency-neutral basis, sales grew approximately 14% for the full year and growth was described as “balanced across all product lines and countries.” For the year, pre-tax income grew 24% to $239 million, driven by higher revenues, improved gross margins and overhead leverage, more than offsetting investments in demand creation and infrastructure.
In the U.S., footwear and apparel growth 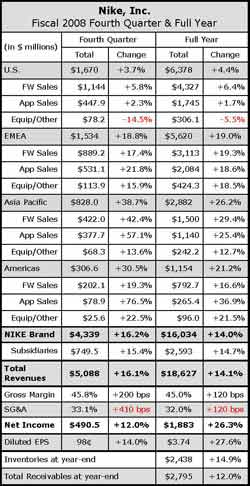 offset declines in equipment for both periods.  For the fiscal year, U.S. footwear revenues grew 6%, driven by the strong performance of sportswear and Brand Jordan, more than offsetting lower sales of Nike brand basketball.  Overall, Nike and Jordan unit sales grew at a low-single-digit rate, with the remainder of the sales growth driven by higher ASPs.
Apparel results were mixed for Nike in the U.S. as performance product lines continue to perform very well, but were partially offset by weaker results from sportswear. Performance growth came from both technical and team sports products, as well as from all regions.
Though sales growth was generally healthy, pre-tax income declined 9.8% for Q4. Management commented the decline largely came as a result of timing of spending around the performance trainer launch as margins “were actually reasonably good in the U.S..”  Management also noted that targeted price increases have met “no resistance coming from the consumer side.”
Focusing on the flat futures orders for the U.S., Denson indicated that footwear and performance apparel futures were still in good shape, sportswear suffered.
In the Other Business section, Converse had a strong year with reported revenues up 29% to $729 million and wholesale equivalent sales to over $2 billion worldwide. Nike Golf revenues grew 12% to $725 million, while revenues at Cole Haan increased 6% to $496 million. Sales at Hurley increased 14% to $171 million.
For the quarter, Umbro posted revenues of $54 million and a pre-tax loss of $21 million.  For fiscal 2009, Nike expects Umbro will replace roughly three-quarters of the revenue contributed by the sold-off Bauer and Starter businesses, although it will be dilutive to Nike, Inc. earnings in the near term.
Excluding gains in the sale of Starter and Bauer, fiscal 2008 pre-tax income for the other businesses grew 12% to $336 million.
Nike expects fiscal 2009 net revenues to grow in the high-single-digits with modest gross margins improvements driven by owned-retail expansion and product mix shifts. First quarter results will be adversely affected by one-time gains included in fiscal 2008 results, as well as the inclusion of a full year of results for Umbro.  For the full year, the company expects these items to reduce earnings growth by 36 cents per share.