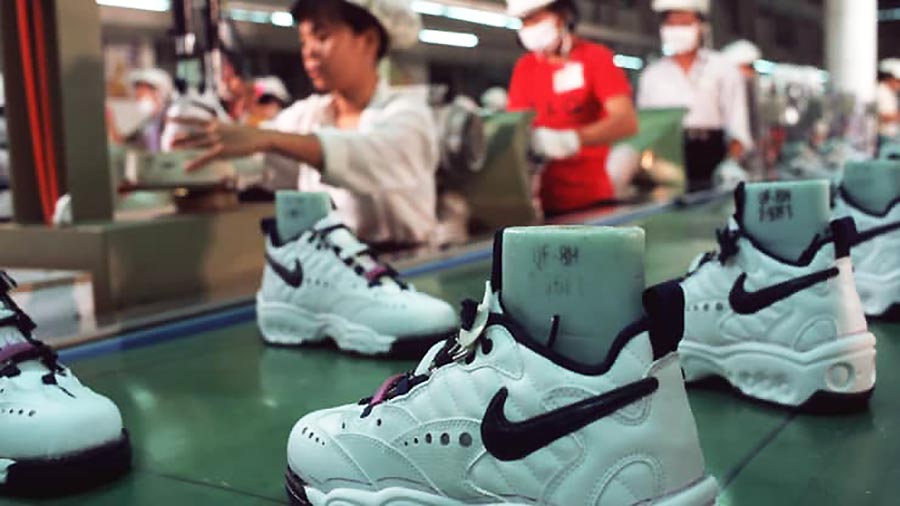 BTIG lowered its rating on Nike Inc. to “Neutral” from “Buy” on its belief that supply chain disruptions from the pandemic-driven factory shutdowns in Vietnam have worsened since the company last reported earnings on June 24.

Camilo Lyon, the lead analyst on the stock at BTIG, said the update is based on insights provided to his team from its manufacturing and retail contacts.

The analyst wrote, “We believe the risk of significant cancellations beginning this holiday and running through at least next spring have risen materially for NKE as it is now facing at least two months of virtually no unit production at its Vietnamese factories, which accounted for 51 percent of footwear and 30 percent of apparel units (43 percent of total units) last year.”

Based on supply chain checks with manufacturing contacts in Vietnam and Singapore, BTIG now estimates F22 sales could be flat to up low single-digits versus the current guidance of low double-digit growth.

Lyon said that according to BTIG’s manufacturing contacts, Nike was planning footwear units to grow high double-digits in Vietnam; however, BTIG estimates the factory shutdowns could have the impact of reducing unit growth to zero.

“What’s more, when the factories do reopen, we believe ramping production to full capacity will take time, further exacerbating logistic bottlenecks as social distancing and a phased return to work approach limit the factories’ ability to catch up on missed production schedules,” wrote Lyons in the note.

In all, BTIG estimated Nike’s footwear unit growth for fiscal 2022 could be down 13 percent, partially offset by a 3 percent pricing gain. Given the greater complexities surrounding footwear manufacturing versus apparel, Lyon does not believe Nike can outsource elsewhere to recover the lost units.

Including pairs lost due to factory shutdowns so far as well as pairs lost due to capacity restrictions in coming months, BTIG estimates a total 160 million pairs will potentially not be made this year. An estimated 350 million of Nike’s footwear pairs are estimated to have come from Vietnam last fiscal year.

Lyons said that while restrictions are set to be lifted on September 15, factory restarts are expected to come back online slowly, likely getting to no more than 50 percent production capacity through the end of the year. Container shortages, other supply chain bottlenecks, labor shortages (as workers are not incentivized to come back before the New Year) are also expected to impact capacity.

“We note that our downgrade is based solely on challenging supply dynamics that will make it very difficult for NKE to meet robust demand driven by high brand heat, let alone its +LDD revenue growth guidance this year, we believe,” said Lyon. “Furthermore, we are hard-pressed to see a scenario in which estimates will be revised higher this year; more likely are forthcoming downward revisions.”

From an investor sentiment perspective, Lyon noted that over its history, Nike’s stock trajectory has been mostly aligned with sales growth, and the stock will likely “at best tread water until more clarity is had around its manufacturing issues and, at worst, suffer from reduced sales guidance and ensuing multiple compression.”

The biggest impact is seen on Nike’s fiscal second-quarter through the fiscal year ended May 31, 2022.

Lyon wrote, “While NKE typically is incredibly well-equipped to manage such disruptions, we fear this issue is just too large to control, even for the best-run athletic brand in the world.”