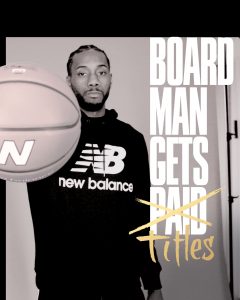 New Balance Basketball celebrated Kawhi Leonard’s MVP performance and Toronto’s first-ever championship by posting a new “Board Man Gets Titles” billboard in Toronto. New Balance signed Leonard to an endorsement deal in November 2018 to mark its return to basketball.

Following the reveal of the “Fun Guy” billboard during the conference finals and most recently, the “The King of the North is Coming” billboard in Oakland, “Board Man Gets Titles” is now displayed in downtown Toronto and posted across @NewBalance social channels, New Balance said in a statement.

New Balance said Leonard and his former teammates first started saying “board man gets paid” in high school and college to motivate each other to make it to the professional league.

“It’s about working hard, outworking an opponent. Rebounds help win you games, big rebounds, offensive rebounds, limiting the team to one shot,” said Leonard during a press conference when asked to confirm the statement. Now winning his second championship title, “Board Man Gets Titles” is a callback to Leonard’s determination to play professional basketball and celebrates his historic accomplishment in Toronto.

New Balance first announced Leonard’s partnership and debuted the signature OMN1S basketball shoe during All-Star Weekend in February. The OMN1S and a matching 997 Sport both dropped online on May 7 and sold out immediately.

New Balance’s only other endorsed athlete in basketball is Darius Bazley, a top high school prospect who last October decided to skip college and forego his NCAA eligibility to sign with New Balance. He spent the last year as an intern for New Balance and is available for the upcoming NBA Draft.