Bruce M. Cazenave, Chief Executive Officer, stated, “We are pleased with the performance of our business in the third quarter and first nine months of this year, as we generated sales growth and significant improvements in net income compared to the same periods last year . Our results reflect the continued strength of our Direct business, which highlights the successful execution of a number of our key initiatives, including generating strong top line growth while delivering higher gross margins. As we previously disclosed, our Retail business was impacted by a shift in some of our retail partners' buying patterns, which accelerated revenue into the second quarter from the third quarter. Importantly, our Retail margins stabilized despite being adversely affected by the revenue shift and resulting lower volume absorption of fixed costs in the third quarter versus the same period last year. Our Retail segment continued to contribute positively to our overall profitability in the third quarter.”

Mr. Cazenave continued, “The momentum in our Direct business is encouraging, and the positioning of both the Retail and Direct businesses for more profitable growth in the future is advancing as planned. New products remain a top focus area for the company and we have a number of exciting products hitting the marketplace during the fall / winter season, including a new and unique DVD based exercise program, new and refreshed items for our Retail segment, and the marketing re-launch of our CoreBody Reformer. Our new product plans and restructured operating platform are key elements of our strategy to successfully grow revenues, leverage our operating expenses, and continue to improve our operating margins while expanding our product portfolio.”

Net sales for the Direct segment were $25.1 million in the third quarter of 2012, an increase of 10.9 percent over the comparable period last year, reflecting strong demand for the Company's cardio products. The higher sales were also partly driven by increased advertising effectiveness and higher U.S. consumer credit approval rates, which rose to 31 percent in the third quarter of 2012, up from 27 percent for the same period last year.

Net sales for the Retail segment were $11.4 million in the third quarter 2012, compared to $13.7 million in the third quarter last year. As previously disclosed, in the first half of 2012, the Company took certain steps to stabilize declining gross margins in its Retail business. These steps included a price increase for the back half of 2012, which contributed to a 23 percent year-over-year increase in sales for the second quarter as some Retail customers accelerated a portion of their purchases into the second quarter compared to their typical buying patterns. 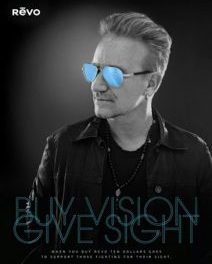 Revo Partners with Bono to Improve Access to Eye Care