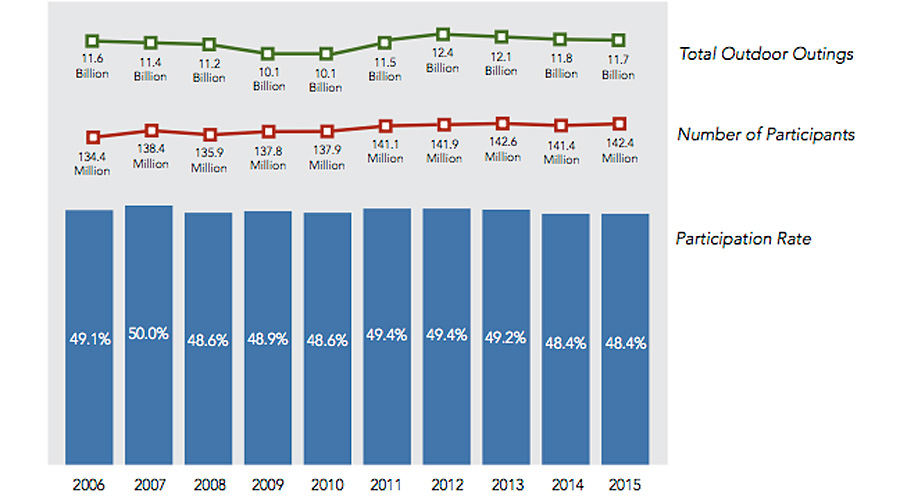 The latest annual figures released this week from the Outdoor Foundation show that more Americans got outdoors to recreate in 2015, albeit for fewer total outings, underscores broader challenges and opportunities in the active-lifestyle space — enthusiasts are devoting less time to their individual activities in favor of a wider range of experiences.

Less Is More
The report, based off a survey of 19,000 Americans and conducted by the Outdoor Foundation, the non-profit arm of the Outdoor Industry Association, estimated that 142.4 million people got outside to recreate at least once in 2015, a gain of 1 million from the year prior. That equated to a U.S. outdoor participation rate of 48.4 percent, which remained unchanged from a year ago, accounting for population increases.

The more telling figure was that despite more people getting outdoors, total outings dropped by 1 percent, from an estimated 11.8 billion outings in 2014 to 11.7 billion in 2015. Moreover, the number of outdoor outings has dropped consistently over the past four years — down nearly 6 percent from 12.4 billion outings in 2012, even while the number of participants has slowly risen, and up less than 1 percent during the period.  In other words — as a whole, people are spending less time outdoors.

That likely comes as no surprise to those with millennial and younger generations in the house who, thanks to instant and 24/7 access to information and services via their mobile devices, can easily bounce from activity to activity, indoors and out. While 30 years ago consumers tended to focus on a few activities and spend a lot of time mastering them, today’s enthusiasts would rather dabble in a larger variety of activities. Call them the renaissance consumers — preferring to experience a little of a lot, rather than a lot of a little. Smartphone apps, including Uber, Yelp, Facebook and others, allow for quick planning and adapting schedules on the fly.

The most popular forms of getting outside in the report — running, jogging and trail running, followed by fishing and biking, are all activities one can do in a fairly short amount of time.

So is that good or bad for the outdoor and larger active-lifestyle space? It’s good news in the sense that the trend is also affecting every other leisure activity — the perpetual reader or obsessed video-game player, for example, is seeking variety as well, giving up some time to spend a day recreating outdoors. That presents opportunities for brands to pick up new customers and bring them into the fold, and not just with entry-level products. These experience-hungry consumers have proven that even though they’re dabbling in the hobby, they frequently expect to do it with high-quality, or at least good-looking, gear. And it’s likely a large contributor to the athleisure boom — causal and core consumers alike wanting the flexibility to go recreate when they have the time, even if they are recreating less overall. Within the active-lifestyle space, enthusiasts are seeking variety, too — yoga on Thursday, CrossFit on Friday, hiking on Saturday.

The bad news? More participants spending less time outdoors exhibits a dilution of the core, which could whittle away at the foundation of the industry. It’s like a neighborhood filling up with renters and their shorter-term interests in the properties, versus one populated mostly by owners with longer-term investments.

Finding the balance of welcoming and serving the new, while still investing in the core, is the challenge for brands.

Focusing On Youth
While the younger generations are proving to be a somewhat scattered bunch, the industry still recognizes their importance to usher in future generations to the outdoors.

Participation, albeit with fewer outings, among young adults — ages 18 to 24 — increased 5 percentage points, the biggest boost among all age groups.

“We’re encouraged by the data from the Outdoor Participation Report, which shows that the percentage of young adults recreating outdoors is on the rise,” said Chris Fanning, executive director of the Outdoor Foundation. “We’re cautiously optimistic that this influential audience of 18 to 24-year-olds, which has been a top target market for the foundation for many years, will continue to build on this upward momentum.”

The results of the study also showed that the majority of Americans participated in outdoor activities to get exercise. Walking for fitness was, by far, the most popular crossover activity. In 2015, half of all outdoor participants also walked. The second biggest motivator was the opportunity to spend time with friends and family, which highlighted the family-friendly nature of many outdoor activities, officials said.

Consistent with previous years, minorities lagged behind in outdoor participation. In general, Caucasians had the highest participation rates and African Americans had the lowest.

Although Hispanic Americans made up a small percentage of total outdoor participants, those who did participate averaged the most annual outdoor outings per person.