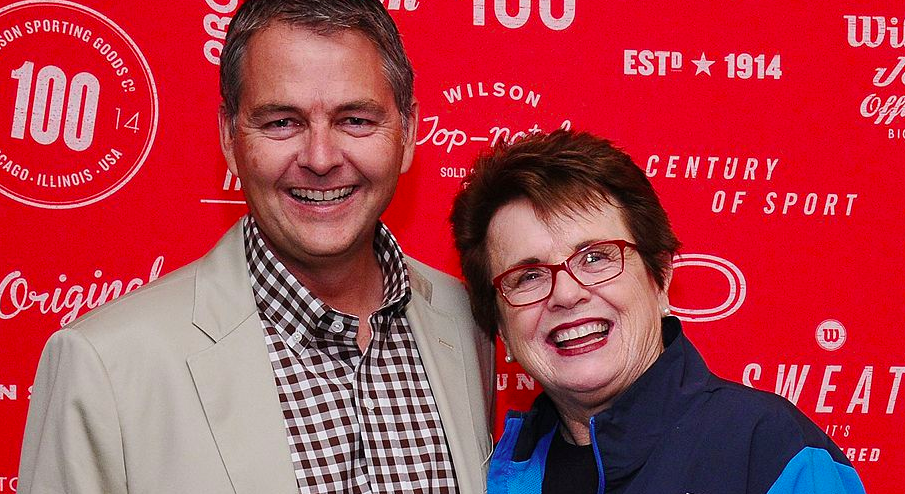 The announcement was made by Patrick Galbraith, USTA Chairman of the Board and President, who led the search for current CEO Gordon Smith’s replacement.

As CEO and Executive Director, Dowse (pictured above left, with Billie Jean King) will be charged with leading the USTA’s overall vision and its strategy for the growth of tennis participation with juniors and adults at all levels, while also ensuring diversity throughout the sport. He will provide direction and support and collaborate with USTA sections, districts, Community Tennis Associations and national committees for all of the USTA’s grassroots efforts. Additionally, he will set the strategic direction and lead the USTA’s involvement in professional tennis in the U.S. and throughout the world, developing strategies to further promote the health and viability of professional tennis in the United States.

Dowse has served as president of Wilson since 2013. He was responsible for the company’s global strategy, corporate operations and manufacturing across more than 160 countries. He oversaw the company’s growth and productivity initiatives, including innovation, digital transformation, product development, the formation of new business and partnerships, and the expansion of Wilson’s footprint in racquet sports, team sports, baseball, softball and golf.

“Michael’s experience as a proven industry executive and his long history with our sport make him the ideal candidate for this position,” said Galbraith. “The USTA is poised for growth, and we believe Michael will be the catalyst we need.”

While leading Wilson, Dowse was instrumental in the company’s year-over-year increases in profitability and market-share gains. He led the acquisitions of the Louisville Slugger and EvoShield brands, which have significantly bolstered the company’s baseball presence and offerings. Prior to his role as President of Wilson, Dowse held progressive positions within Amer Sports, and before that, he was director of tennis footwear for Nike, Inc.

“Having grown up playing tennis and being part of a family committed to community tennis, I feel very fortunate to be in a position to lead the USTA. I look forward to working collaboratively with the passionate volunteers, professional staff, current and past USTA board members and industry leaders to promote and develop the growth of tennis,” said Dowse. “I also would like to recognize the incredible achievements of Gordon Smith and the USTA team over the last several years. The foundation for growth is well established with proven assets, such as the US Open, the USTA National Campus and the recent launch of Net Generation, our new youth tennis initiative.”

Starting Jan. 1, 2020, Dowse, 53, will be based at the USTA National Campus in the Lake Nona neighborhood of Orlando, FL