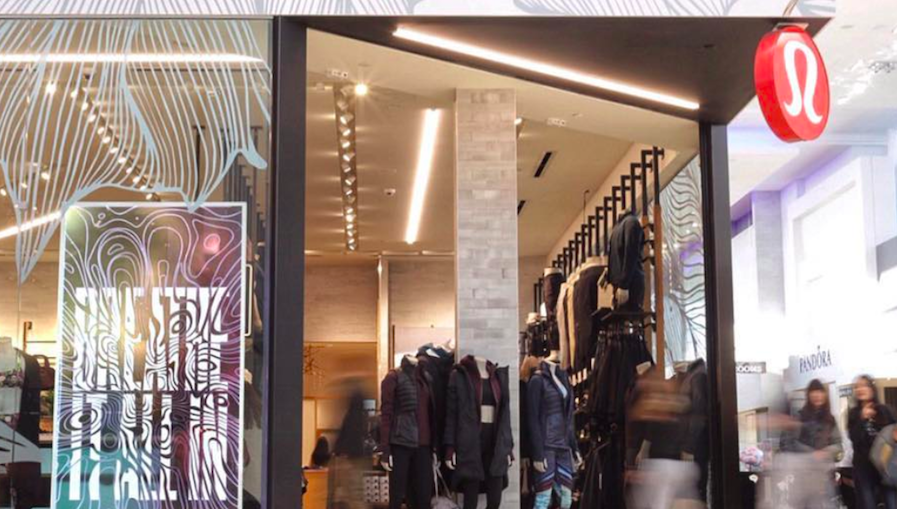 Defying predictions that the athleisure bubble had burst, Lululemon reported better-than-expected third-quarter earnings and raised its guidance for the year.

On a conference call with analysts, Laurent Potdevin, CEO, said the performance keeps the company on track to deliver $4 billion in revenues by 2020 – more than double its sales in 2015 – and “validates our position as an originator brand leading the market we created and capturing the accelerating global shift towards an active mindful lifestyle.”

The top-line gains were driven by online sales, which grew 25 percent on a comparable basis in the three months ended October 29. In its store channel, comps nudged up 1 percent on top of a 4 percent gain in the year-ago quarter. On a combined basis, comps grew 7 percent on a constant-dollar basis. Lululemon had projected comps would increase in the mid-single digits. Traffic and conversion improved both in-store and online.

Net earnings declined 13.7 percent to $58.9 million, or 43 cents a share. The decline reflected a pre-tax charge of $22 million to close most of its Ivivva locations, a plan announced earlier in the year. Adjusted to exclude non-recurring items in both periods, earnings rose 19.4 percent to 56 cents share from 47 cents a year ago and ahead of its guidance range between 50 and 52 cents.

The bottom line also benefited from an improvement in adjusted gross margin by 110 basis points, excluding the impact of 20 basis points related to Ivivva. Product margins improved by a better-than-expected 70 basis points resulting from favorability in product mix and lower product costs, offset somewhat by modestly higher markdowns versus last year. The gains were helped by strength in pants, which generally carry high margins. The improvement came on top of a 450-basis-point improvement in product margin last year and overall reflects improving supply chain capabilities.

SG&A expenses grew 70 basis points to 34.8 percent, in line with expectations, with about 60 basis points of the increase relating to the planned costs associated with the improvements to its e-commerce platform. The expense rate marked a more moderated increase after being up 380 basis points in the second quarter.

By product category, women’s pants jumped 24 percent in the quarter, boosted by the launch of its newest fabric innovation, Everlux, that was “incredibly well-received” by customers, said Potdevin. On Black Friday, the introduction of a capsule collaboration with Forster Rohner, one of Europe’s top couture lace houses, led to its biggest week ever for pants sales in North America.

Jackets and outerwear comped ahead 26 percent in Q3. In men’s, comps grew 21 percent, benefiting from an additional focus on co-located stores, the expansion of its ABC franchise to include slim and jogger styles and the brand’s first-ever men’s campaign. The ABC men’s franchise doubled in Q3 versus last year.

Added Stuart Haselden, Lululemon’s CFO and COO, on the call, “We’re also excited that the momentum we saw in both men’s and women’s jackets and outerwear at the end of Q2 continued into Q3 as our evolved offering is resonating well with guests. We continue to see outerwear and jackets as an important opportunity for us in Q4.”

Asked about tops in the Q&A session, Potdevin said the success of the Enlite Bra, launched earlier this year, shows that the retailer has the “ability to be just as strong in the bra category as we’re in women’s pants.” Additional innovation in bras is being planned for 2018. Overall tops will also feature new construction and fabrics, including more natural fabric.

Overseas, Asia, albeit off a small base, was up nearly 100 percent in Q3, including 450-percent growth in China. Potdevin said China is particularly embracing digital and he expects Lululemon’s e-commerce penetration in China “could approach 40 percent to 50 percent of our business as we continue to grow and enhance our distribution channel, including Tmall and WeChat.” The brand tripled its business on Tmall’s singles day this year.

In Europe, sales grew 40 percent and benefited from the “accelerating shift towards an active mindful lifestyle in Northern Europe,” said Potdevin. The opening of its first store in Munich “has been incredibly positive.”

Potdevin credited the string of successful openings internationally to its “digital ecosystem” that “fuels our insight on market readiness, allowing us to build awareness, energy and connections in a community before putting a physical presence.” Six more stores are set to open in Asia in the fourth quarter.

In North America, Potdevin said the company is “realizing the untapped potential in our core market across store and digital.” That potential was marked by the opening of destination locations on Fifth Avenue in New York and West 4th Street in Vancouver that “are both performing extremely well, with little to no cannibalization, further validating our co-located store strategy and reflecting the opportunities that we see in both the U.S. and Canada due to our agile and relevant store formats.”

Among factors behind Lululemon’s overall success is its focus on vertical integration that provides the company with “end-to-end control of every aspect of our business, from every guest interaction anywhere in the world, to a margin structure that allows us to stay positioned at the pinnacle of the market we created, investing in levels of quality and functionality that are unmatched in the industry.”

Potdevin also cited its “nimble and constantly evolving store portfolio” that includes co-located and experiential locations catering to each market and a footprint that “remains underpenetrated with only 388 locations across the globe.”

From a macro level, the brand continues to benefit from a behavioral shift toward people seeking to live an active-mindful lifestyle. Said Potdevin, “Guests are drawn towards brand with purpose that reflects who they are and who they want to be. Lululemon empowers our guests to design the life they’ll have. This is our DNA and has been for almost 20 years now.”

But he particularly credited its ability to directly reach customers through its sales associates, termed “educators,”  and localized experiences, such as its Mindfulosophy lounge or in-store yoga led by its ambassadors. Said Potdevin, “Whether online or off-line, we value and prioritize the direct connections we have with our collectives. The rapport that exist between our guests, educators, ambassadors across all our market is the heartbeat of the brand.”

The 25-percent comp gain online marked an acceleration on the 16 percent online comp seen in Q2, fueled by double-digit increases in traffic and transactions as well as the “best conversion” seen this year. The improvement reflects investments in “better photography, more intuitive merchandising and more disciplined planning” put in place in the first and second quarters, according to Haselden. Customer response to a revamped website launched at the end of Q3 has been favorable.

Haselden said that in the U.S., Lululemon has seen positive store traffic in the first five weeks of the quarter and sequentially improved store traffic in its Canadian business. The updated e-commerce site “is delivering important improvements in conversion that will support continued double-digit increases in our digital business,” he added. Twenty-two seasonal stores will open in North America to support holiday selling.

Potdevin said Lululemon’s “breathe it all in” holiday campaign has been its “most powerful campaign to-date” that has led to the donation of 250,000 minutes of meditation. Said Potdevin, “We are on track to acquire our most significant number of new guest per quarter ever, and our personalized emails are driving 15 percent conversion.”

Asked in the Q&A session about the pending departure of Lee Holman, its EVP and creative director at the close of the year that was announced on November 9, Potdevin said his exit was “really driven by personal reasons.” The 2018 range is “very much planned already with the exception of up some capsules and collaborations” while spring 2019 planning is underway. Potdevin added that the company will make an announcement next week on the women’s design side that’s “really powerful” and overall he feels the company is in “really, really strong shape” from a design standpoint.

He added, “So we’re going to look for a creative director. But clearly, we’re in no rush to fill that void. It’s a very, very important role. It’s not an easy role to fill and we’ve got incredible talent and people in all the key roles to continue to deliver and accelerate on the performance that you’ve seen so far. So I feel really, really good.”