Johnson Outdoors Inc. reported that it cut expenses nearly 10 percent in the the quarter ended March 28 to mitgate soft demand for its spring products, but that if April POS data hold, ramping up production to meet demand for a host of new products from its Minn-Kota, Hummingbird, Scubapro and Jetboil brands could become the company's next challenge

The Wisconsin company said prolonged winter weather caused retailers and their customers to delay purchases of its fish finders, trolling motors, kayaks, dive computers, camping and other outdoor gear in the typically low volume fiscal second quarter. That made it even more difficult to beat the record sales achieved in the same quarter a year ago. 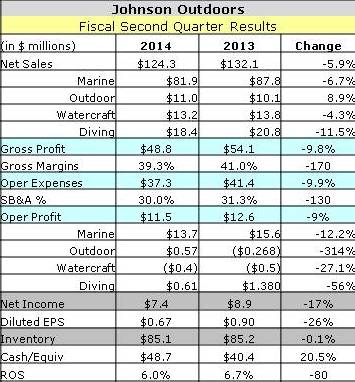 Instead, net sales slipped 6 percent to $124.3 million. Revenue declines of 7 percent in Marine Electronics, nearly 4 percent at Watercraft, and 11 percent in Diving, eclipsed a 9 percent increase in Outdoor Gear, which returned to profitability thanks to a tent order from the U.S. military. Gross margins slipped 170 basis points and operating margins 290 basis points as the decline in sales more than offset a 10 percent cut in spending. Continuing restructuring costs at the Watercraft division, which has been scaling back overseas and refocusing product development on the fishing category, also weighed on the P&L statement, according to JOUT Chairman and CEO Helen Johnson-Leipold.

“This year's unusually long and frigid winter has shifted the pacing of customer orders to more closely align with the retail-selling period of our products during the spring and summer months,” she said.

Johnson-Leipold said POS data from April indicates strong demand for JOUT’s products, including a new Talon shallow water anchor from Minn-Kota, new Onix fish finders from Humminbird, new Chromis and Aladin dive computers from Scubapro and Jetboil's new award-winning Joule Cooking System. The late start to spring in many parts of the country, however, has compressed the selling season and made it difficult to forecast full year performance.

“Demand is good now,” she said. ”The challenge this season may well be shifting from controlling inventory to ramping up to meet demand. That is going to be a big issue: how big is demand and how quickly do they want it.”

Johnson-Leipold noted that the company is well prepared to ramp up demand for its rotomolded Necky, Ocean Kayaks and Old Town boats, because it makes those in Maine. Balancing supply and demand at its much larger Marine Electronics business and Eureka! tents, will be more challenging because of lead times from overseas suppliers.