The company noted that the the year-ago quarter saw record-high first quarter sales and earnings.

“The outdoor recreational industry is highly seasonal and heavily influenced by weather conditions. Last year, the first quarter benefitted from unusually early new product shipments, particularly in Marine Electronics. This year, we once again have exciting new innovations across the portfolio, with demand strong and growing; however, the early onset of harsh winter conditions during this year's first quarter has shifted the timing of new product orders and shipments,” said Helen Johnson-Leipold, chairman and chief executive officer. “As always, the battle for consumer discretionary dollars is fierce and challenging, but, at this time, we remain optimistic in our ability to deliver against our 2015 financial targets focused on growing profits faster than sales.”

Total operating loss during the seasonally slow first fiscal quarter was $2.9 million compared to an operating profit of $1.5 million in the prior year period. Primary drivers behind the quarter-to-quarter comparison were:

At Dec. 27, 2013, cash, net of debt was $7.5 million compared to cash, net of debt of $8.6, million at the end of the prior year quarter. Depreciation and amortization was $2.4 million year-to-date, compared to $2.4 million during the prior year-to-date period. Capital spending totaled $3.4 million during the first fiscal quarter compared with $3.0 million in the 2013 first fiscal quarter. In December 2013, the company's board of directors approved a quarterly cash dividend to shareholders of record as of Jan. 9, 2014 which was payable on Jan. The company ended the quarter with nearly $10 million more inventory, up 13 percent for the year ago quarter.

“New products drove the increase in inventory year-over-year, and we are working diligently to manage levels down and control expenses without compromising our ability to meet customer demand and expectations throughout the coming season. The balance sheet is strong, our capital structure greatly improved and we have the capacity to invest in opportunities focused against our long-term goal of sustained profitable growth while continuing to enhance value for our shareholders,” said David W. Johnson, vice president and chief financial officer. 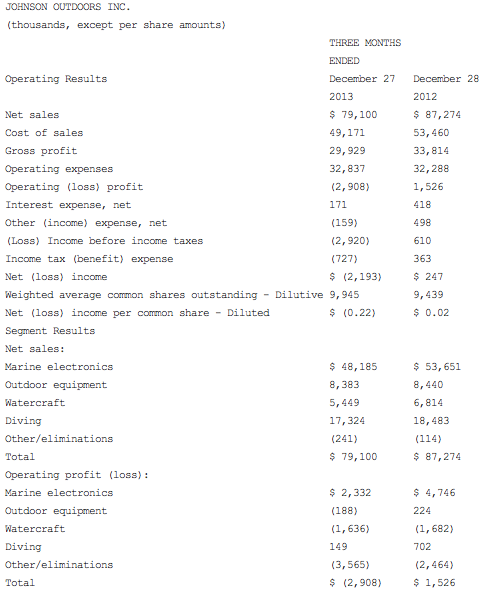