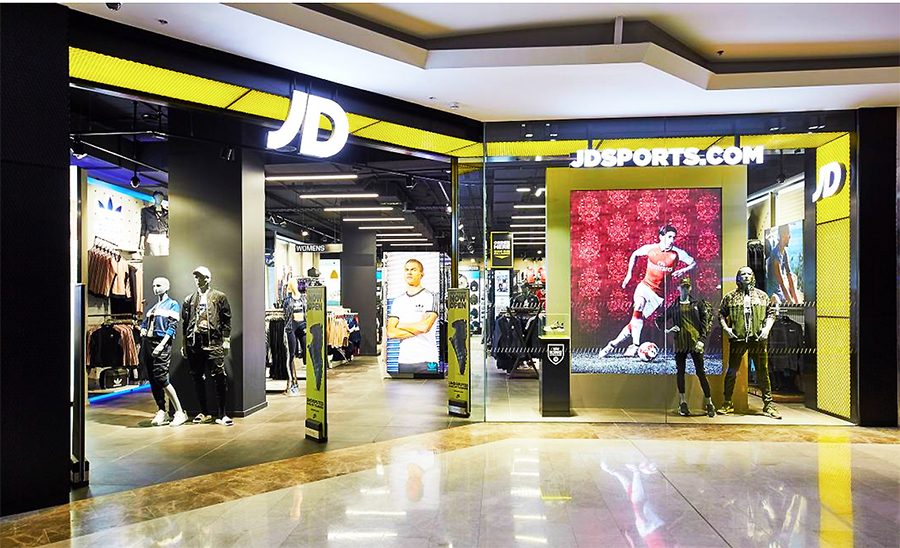 JD Sports Fashion on Tuesday committed to developing Finish Line, acquired in 2018, and JD Sports as separate banners in the U.S. marketplace. Officials provided the update while reporting strong sales and profit improvement for the Finish Line chain its year ended February 1.

The gain reflects the acquisition in June 2018 of The Finish Line Inc. for cash consideration of $558 million (£400.5 million) that marked the U.K.’s largest sneaker chain’s entry into the U.S.

On a pro-forma basis, compared to the same 52-week period in the prior year, same-store sales for the combined Finish Line stores and website (excluding Macy’s concessions) grew 9 percent in the year.

Operating profits before exceptional items for the combined Finish Line and JD business in the U.S. were £97.9 million ($123 mm), up from £26.6 million in the year-ago period for the 33-weeks post-acquisition period.

In the company’s statement, Peter Cowgill, executive chairman, said the U.S. had an “encouraging performance” in its first full year for the company. Management also remains “satisfied” with the progression on gross margin in the Finish Line business which increased over the period to 42.9 percent from 42.2 percent on a pro-forma 52-week basis.

Finish Line Business Focuses On Expanding Apparel And Product Margins
Updating progress on Finish Line, Cowgill said management believes the Finish Line banner “appeals to a different core demographic to JD and so we will need both banners longer term if we are to have flexibility in our consumer reach and appeal.”

He added, “Finish Line is an important fascia in our Group and we are pleased with the developments in its first full year as a subsidiary and the progress against the key commercial pillars which we identified previously as providing the foundation for a sustained improvement in the performance over the longer term.”

Cowgill then updated progress on three strategies JD has set in place to reposition the Finish Line business:

JD Sports Banner Aims At Major Metropolitan Markets
On progress of the JD banner in the U.S., Cowgill noted that JD increased its presence in the U.S. to 11 stores with one new store at Lincolnwood (Chicago) complemented by the conversion of a further five existing Finish Line stores. Two of the conversions, Mall of America (Minnesota) and Deerbrook Mall (Houston) were ‘full’ conversions with the installation of the full JD retail systems across all product categories. The remaining three stores, Mall of Georgia (Atlanta), Cumberland Mall (Atlanta) and Roosevelt Field (New York) were ‘lite’ conversions with the installation of fixtures for apparel and changes to the signage with the existing Finish Line footwear systems largely retained. Cowgill said the ‘lite’ conversions can be converted quicker and be delivered with substantially less capital investment, providing a more flexible framework to roll-out JD in the U.S. market.

“We have a clear vision to develop JD in the major metropolitan markets with more than 70 additional existing Finish Line stores considered as being suitable for conversion to JD of which six have already been converted in the year to date in the ‘lite’ style,” said Cowgill. “It is our current intention that the majority of the remainder will be converted over the next two years although the exact timings for these works will need to be flexed according to the specific factors and any ongoing restrictions at each location.”

Under the guidance of the local authorities due to COVID-19, JD paused its plans to open a JD flagship in Times Square in New York City this spring and now plans to open the store by the end of the summer. Said Cowgill, “This store will be an important milestone in our development, significantly enhancing our presence and standing with both consumers and our brand partners in the United States.”

JD Sports Revenues Climb 30 Percent Globally In Year
Companywide, sales for the 52 weeks ended February 1 increased 29.5 percent to £6.11 billion ($7.7 bn). The gains reflect revenue from Finish Line and JD in the U.S. as well as the acquisition of Footasylum. Same-store sales across all banners increased by 6 percent with the total same-store sales, including online, increasing by 10 percent.

As expected, total gross margin in the year of 47.0 percent, slightly behind the prior year’s level of 47.5 percent, due to the inclusion of a full year of the lower-margin Finish Line business in the U.S.

Much of the non-recurring charges was the write-off of goodwill at Go Outdoors, which JD, last month put through a pre-pack administration. The retailer at the time announced the appointment of Michael Magnay and Daniel Butters of Deloitte LLP as joint administrators for its Go Outdoors business, before buying it back in a pre-pack deal for £56.5 million ($71 mm).

The sports fashion retailer delayed the release of its results in April in order to provide investors with more clarity on the consequences of the pandemic.

Same-store sales for its global Sports Fashion banners (excluding Finish Line) increased by 8 percent with total comps, including online, growing by 12 percent. All regions for the JD fascia delivered same-store growth in the year although JD said it was particularly encouraged by the performance in its core UK and Republic of Ireland and Europe markets, where total same-store sales (including online) grew by more than 10 percent.

The overall gross margin in Sports Fashion segment was reduced to 47.4 percent from 48.0 percent, largely due to the inclusion of the lower margin Finish Line business for the full period.

JD said it’s inevitable that there will be some gross margin erosion in the new year with additional promotional activity required to clear seasonally non-relevant apparel stocks in stores due store closures caused by the pandemic. JD expects to have inventories at the Sports Fashion segment in balanced by the end of the current financial year.

Said Cowgill, “Whilst our global Sports Fashion businesses are inevitably suffering currently from the adverse impacts of the COVID-19 outbreak, we should recognize that fundamentally they have robust propositions and strong foundations from which to recover. We firmly believe that the relevance of our Sports Fashion fascias to consumers will not be diminished by the current situation, although it will inevitably slow our momentum this year.”

Outdoor Segment Hit By Integration Challenges At Go Outdoors
The Outdoor segment, including Blacks, Millets and Go Outdoors, faced a year of transition with the Go Outdoors business, including a number of integration issues in the project to transition store replenishment to being fulfilled entirely from a central warehouse.

The overall loss before tax and exceptional items in the Outdoor segment increased to £23.5 million compared a loss of £4.3 million in 2019. JD recognized an exceptional charge of £42.5 million in the year in relation to the impairment of the goodwill arising in previous years on the acquisition of the Go Outdoors business.

The overall gross margin in Outdoor reduced slightly to 41.9 percent from 42.5 percent) largely driven by additional promotional activity in Go Outdoors in the first half of the year when the impact of the integration issues was greatest. Encouragingly though, the gross margin in the Blacks and Millets business improved by 1 percent to 43.6 percent.

Said Cowgill, “We believe that the restructuring of Go Outdoors will correct fundamental historic structural weaknesses in the business and, whilst we regret that there will inevitably be some limited store closures in future months, we are pleased that it will protect the maximum number of jobs possible. Greater future integration of the Outdoor businesses, with Blacks and Go Outdoors having access to common merchandising systems and shared commercial resources will provide a robust, effective and cost efficient platform for longer term developments.”

Outlook Not Provided Due To Pandemic
JD declined to provide an outlook for the current year due continued uncertainty on the impact of COVID-19.

Said Cowgill, “We were encouraged by the continued positive trading in the early weeks of the year prior to the emergence of COVID-19 and we firmly believe that we are well placed to regain our previous momentum. Looking longer term, there is inevitably considerable uncertainty as to what the effect of COVID-19 will be on consumer behavior and footfall with future store investments highly dependent on rental realism and lease flexibility. Ultimately, however, we remain confident that we have a market leading multi-channel proposition which has the necessary flexibility and agility to prosper within a retail environment that may see profound and permanent structural change.”