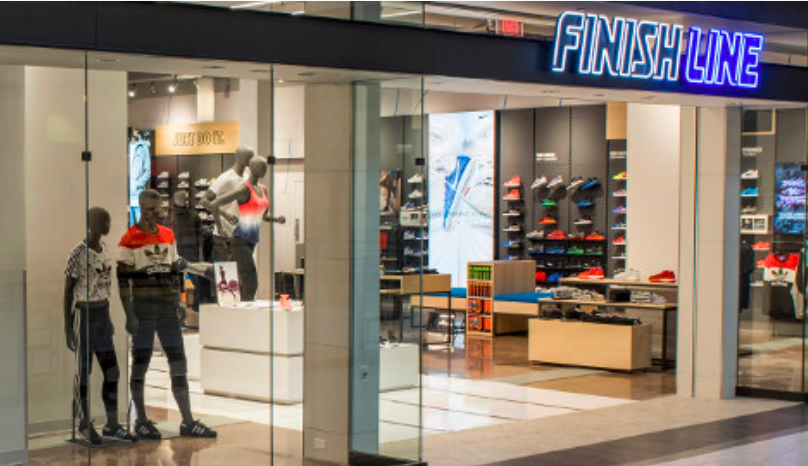 In a shocking move, JD Sports announced plans to enter the U.S. marketplace through the acquisition of the beleaguered sneaker chain Finish Line.

Based on Finish Line’s consensus EBITDA estimates of $90.5 million, the deal is valued at 6.2 times EBITDA with a price/sales ratio of 0.3 times.

Established in 1981 with a single store in Northwest England, JD Sports has grown to nearly 1,300 stores in the U.K. and Europe across a number of banners. They include JD, Size?, Footpatrol, Chausport, Perry Sport and Aktiesport in its Sports Fashion segment. Its Outdoor segment banners include Black, Millets, Ultimate Outdoors, Go Outdoors and Tiso. Sales were £2.39 billion (US$3.39 billion) in 2017. Pentland Group is JD Sports’ majority owner.

Finish Line, based in Indianapolis, had revenues of $1.84 billion in its fiscal year ended March 3. At the end of its third quarter, it operated 944 total stores, with 566 stand-alone and 378 shop-in-shops inside Macy’s. Finish Line’s management team, including CEO Sam Sato, will continue to run the U.S. business.

The transaction has been approved by Finish Line’s board and is expected to close by June 2018, subject to approval by both shareholder bases.

The acquisition will give JD Sports a major foothold in the U.S. The retailer has been expanding overseas in recent years, gaining a presence in France, Spain and South Korea, but was said to be looking to enter the lucrative U.S. marketplace.

JD Sports is expected to particularly benefit from more leverage in relationships with the major footwear players with exclusive merchandise becoming critical from a differentiation standpoint in both the U.S. and Europe. In its fiscal year ended February 25, 2017, Finish Line acquired approximately 71 percent of merchandise from Nike.

Peter Cowgill, executive chairman of JD Sports, said in a statement, “The acquisition represents an excellent opportunity for JD to establish its market leading multi-brand proposition in the world’s largest athleisure market. It immediately offers a major presence in the US, a clear next step to further increase our global scale. Finish Line has many similarities to JD with a strong brick and mortar offering complemented by an advanced and well-invested digital platform. We are looking forward to working with Finish Line’s experienced management team to bring best-in-class retail theatre to the US. Our combined extensive knowledge of the retail market and our product and marketing relationships with global brand partners will benefit our customers, in turn supporting the continued future growth of JD.”

Finish Line has struggled for years due in part to execution issues, including a disruption during holiday 2016 in its supply chain following the implementation of a new warehouse and order management system that cost the retailer $32 million in lost sales. In early 2017, Finish Line sold off its JackRabbit segment after years of losses in a failed attempt to consolidate the run specialty channel.

Lately, the challenge at its core sneaker stores has been sluggish traffic. On Monday, Finish Line indicated the earnings for its fourth quarter would come in ahead of guidance but comps would fall short, dropping 7.9 percent.

While Finish Line’s management team will continue to run the business, the chain in the U.S. is expected to likewise benefit from buying leverage gained in merging with JD Sports.

“Finish Line has long admired JD and their commitment to serve customers with premium brands through a unique and innovative retail experience,” said Sato. “We are thrilled to partner with them and look forward to realizing the impact we will have on the marketplace together.”

“The Special Committee appointed by the Finish Line board recommended and the board voted unanimously to approve entering into this merger agreement,” said Bill Carmichael, chairman of the special committee and lead director of the Finish Line board of directors. “With JD, Finish Line achieves immediate value for its shareholders and moves into a stronger position to compete as part of a global enterprise that leads in our industry.”

The move comes after reports spread last year that Finish Line was in talks to sell itself to Sports Direct International. Sports Direct earlier in last year acquired Eastern Mountain Sports and Bob’s Stores out of bankruptcy proceedings to mark its entry into U.S. retailing and subsequently built up its stake in Finish Line to spark the acquisition rumors.

Sports Direct remains Finish Line’s second-largest shareholder, with a 9.9 percent stake. It also holds an indirect interest in about a third of Finish Line’s shares via CFDs (Contract for Difference), which are effectively options positions.

But growing demand for branded sports shoes and clothes has enabled JD Sports to overtake Sports Direct as Britain’s leading sportswear retailer based on market value.

“The deal looks a sensibly priced entry point into a market that JD must embrace to be considered a genuinely global player,” wrote Jonathan Pritchard, an analyst who covers JD Sports, in a note on Monday.

“In our view, JD Sports is a better quality retailer than [Sports Direct] and lines up more closely to what [Finish Line] strives to be (full-priced retailer carrying marquee product),” wrote Poser. “While we are unsure if JD Sports is a strong executor, we know that the British company has solid relationships with top vendors, such as [Nike].”

Poser also wondered if Finish Line’s decision to partner with JD Sports was in part because Nike preferred to partner with JD Sports over the more discount-driven Sports Direct. At its 2017 Investor Day, Nike launched plans to expand what it terms “differentiated” spaces to 80 percent of its sales over the next five years, up from 40 percent at the time, with a narrowed focus on about 40 retail partners.

Wrote Poser, “We believe under [Sports Direct] ownership, Finish Line would have moved away from carrying marquee product and more toward a discount model. Furthermore, it appears that under JD, the [Finish Line] management team will remain in place.”

For Baird Equity Research, Jonathan Komp wrote, “For Finish Line, joining a scaled omni-channel retailer of premium athletic sportswear is looking more like a necessity amidst ongoing traffic pressures and formidable competition from Foot Locker, which has contributed to challenging financial performance as a standalone company.”

Komp likewise agreed that a key benefit for JD Sports in attaining a place in the “world’s largest and most influential sportswear/sneaker market” is strengthening its “strategic positioning with key vendors such as Nike.”

Susan Anderson at B. Riley said JD Sports’ management plans on accelerating Finish Line’s store refurbishment plan and continuing to consolidate its real estate footprint. But she likewise pointed to buying clout as the primary potential payback for both.

Anderson wrote, “In addition to gaining a strong foothold in the North American market, we believe the merger is likely to improve both company’s negotiating terms with major suppliers and will allow [Finish Line] to better compete with competitors such as [Foot Locker] that has a global presence and much larger scale. JD management highlighted the proximity to Nike in their press release and we believe the combined JD/FINL format and global reach will be beneficial in helping the company win exclusive launches from the manufacturer.”

On the other hand, analysts agreed that the deal could put pressure on Foot Locker’s dominant position in the marketplace.

Wrote Camilo Lyon, an analyst at Canaccord Genuity, “Interestingly, the combined entity would make a more formidable competitor vs. FL as “newco’s” scale and geographic diversity better matches FL’s footprint. We will be interested in seeing what, if any, different growth plans JD Sports has for FINL.”

Komp sees the deal as “positive for the global brands” with a likely stronger combined retailer in the U.S. market, but likewise sees an “incremental negative” for Foot Locker.

The deal, however, includes $33.6 million of termination fees/reimbursement, representing 6 percent of the size of the transaction size, if Finish Line were to accept a superior bid. Komp also said that given the strengthened shareholder rights plan put in place by Finish Line last August, Baird also doesn’t expect a viable bid to materialize from Sports Direct.

Lyon added, “Now with JD Sports taking its first step into the US market via the FINL acquisition, we are hard-pressed to see a competing bid from SPD, especially at a higher multiple. With no competing bid for FINL expected, we maintain our Hold and raise our price target to $13.50.”

JD Sports is funding the acquisition through a newly-created revolving credit facility and an asset backed lending facility secured by FINL’s inventory and receivables. JD management noted that the acquisition is expected to be accretive to earnings for the year ended February 2, 2019.

Earnings are now expected to range between 39 cents and 40 cents on a GAAP basis. Excluding adjustments, adjusted earnings per share from continuing operations are expected to between 58 cents and 59 cents compared to the previous adjusted guidance range of 50 cents to 58 cents. Despite the flat sales, disciplined expense and inventory management helped offset top-line pressure.

“Fourth-quarter comparable sales were more challenging than we expected,” said Sato. “I’m pleased with how our team responded to the top-line headwinds by controlling inventories and expenses, which we expect will deliver profitability at or above the high-end of our guidance range.”

For the year, sales were $1.84 billion, down 0.3 percent. A 1.9 percent decrease in Finish Line sales was only partially offset by a 7.5 percent increase in Finish Line Macy’s sales. Full-year comparable sales for Finish Line decreased 3.9 percent. EPS is expected to range between 35 cents and 36 cents on a GAAP basis. Excluding adjustments, adjusted EPS is expected between 68 cents and 69 cents, compared to the previous adjusted guidance of 59 cents to 67 cents.

Finish Line will now report fourth-quarter results on March 29 versus April 3 previously. Based on the merger announcement, the company will not host a conference call with analysts.