The Denver, CO-based company reported season pass and frequency product sales for its resorts were up approximately 15 percent versus the same time last year prior to the launch of its fall sales promotions. The company's four-season mountain resorts include Steamboat and Winter Park in Colorado, Stratton in Vermont, Snowshoe in West Virginia, Tremblant in Quebecand Blue Mountain in Ontario, Canada.

Winter guest night reservations at its heli-skiing business, Canadian Mountain Holidays (CMH) for the 2015/2016 season are up approximately 8 percent versus this time last year.

Fiscal 2015 results
Intrawest released the data Sept. 9 in its latest earnings report, which shows its consolidated revenue increased $62.3 million, or 11.9 percent, to $587.6 million in the fiscal year ended June 30 due in part to the September 2014 acquisition of the Blue Mountain resort in Ontario, Canada in September, 2014.

Net loss attributable to Intrawest Resorts Holdings Inc. improved $182.5 million, or 96.3 percent, to $6.9 million, or $0.15 per diluted share thanks primarily to a $129.0 million reduction in interest expense and $34.8 million reduction in loss on extinguishment of debt. Both resulted from the restructuring and refinancing that occurred in December 2013, as well as a $19.9 million increase in income from operations.

Mountain Segment
Mountain revenue, which reflects operations at the company's six, four-season mountain resorts, increased $75.1 million, or 21.4 percent, to $425.9 million, primarily due to the Blue Mountain acquisition, which was acquired in September 2014. In the prior year, the company’s 50 percent interest in Blue Mountain was accounted for under the equity method and results included only 50 percent of Blue’s Adjusted EBITDA and none of Blue’s skier visits or revenue.

For comparative purposes, Intrawest provided certain Same Store metrics calculated as if Blue was 100 percent owned in both periods and on a constant currency basis.

On a Same Store basis, Mountain revenue grew $27.4 million, or 6.4 percent, primarily due to increases in season pass and frequency product revenue and revenue from guest services.

On a constant currency basis, Adventure Adjusted EBITDA decreased by $0.8 million, or 4.6 percent.

The outlook assumes a USD/CAD exchange rate of 1.33 and average snowfall and weather conditions.

In constant currency, the Fiscal 2016 Adjusted EBITDA guidance represents growth in the range of 6 percent to 10 percent. 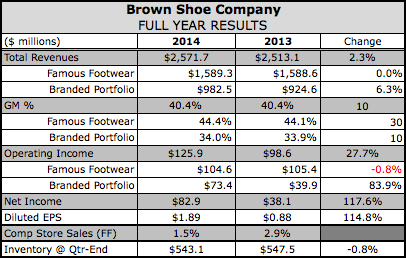