Interbike 2013 wrapped up on Friday, Sept. 20 in Las Vegas on an upbeat note and with praise all around as bike vendors and dealers shrugged off the slow start of the 2013 spring season and focused on what new products might create some excitement in the showroom during the upcoming holiday shopping season and in 2014.

Interbike usually attracts more than 25,000 a year with exhibits from more than 1,200 cycling-related brands. While aimed at bike dealers, it also draws hundreds of people from the non-profit advocacy community and the press. This year’s show also included the debut of Interbike by Invitation, which allowed bicycle retailers to award their best customers with access to show. This consumer day has precedence at Eurobike, but was not as well received in its initial year in the United States. While show organizers won't release attendance numbers until next week, they said they expected it to be flat compared with last year, due to a tighter registration process and the move to a slightly smaller venue in the Mandalay Bay Resort. The show, which is one of more than 30 owned by Emerald Expositions, Inc., is the largest contributor to PeopleForBikes – formerly Bikes Belong  an advocacy organization funded by the bike industry and supported by more than 750,000 individual cycling enthusiasts.

E-commerce, enduro mountain biking, fat bikes and gravel bikes generated much of the buzz at the show, which is the largest bicycle trade event in North America and second only to Eurobike in international scale. Other trending categories included casual-technical cycling apparel, women's fitness bikes and apparel, cargo bikes, folding bikes and electric bikes. There were also more accessories, apparel and bikes aimed at commuters.

More than 50 suppliers were on hand to tout e-bikes and components such as batteries and belt drives. From cruisers and cargo bikes to road and mountain bikes, it appears that there is much broader availability of e-bikes in the United States. Among the companies and brands exhibiting e-bikes were U.S. market leader Currie Technologies (the Accell Group), Stromer (BMC), Electra, Prodeco Technologies, E-Joe, Epik, Solex, E-Bann and Specialized. There will even be a new consumer magazine title from Hi-Torque Publications, Electric Bike Action.

Scott Fitzgerald of Fitzgerald Bicycles, Victor, ID, said he was impressed by how many brands have begun aligning their products and marketing messages to appeal to the broader consumer audience that is less interested in intense competition than just having fun – a trend remarked on at Outdoor Retailer Summer Market in August.

“I saw a lot of products that tell a story that has an emotional draw,” he said. “What the industry is doing, and I hope they keep doing it, is aligning what people are looking to get out of cycling with the products themselves. It's not about putting a number plate on and duking it out in Lycra. And if it is a race scenario, it's a little less serious, it has a little more old-school, grassroots feel. It's a focus on going out and having a great experience, in non-threatening, non-pretentious way. The industry didn't do a good job of talking about the fun of cycling for a long time.”

Mavic, a 100-year-old brand owned by Finland's Amer Sports, introduced a new pedal system developed  in partnership with Time, a new mountain bike wheel/tire system that pushes the locus of control to another degree and a new apparel collection. Components maker Shimano introduced its apparel line to the United States for first time. Jamis reiterated its commitment to the 650B MTB wheel size, and announced the acquisition of cruiser brand Nirve. King Cycle Group returned to the show after more than 10 years away. Thule announced it had eliminated the Chariot brand and folded the company's products into a new Thule line called “Active with Kids,” while Yakima maintained Whispbar as a separate, premium brand. Both companies unveiled a variety of new carriers to keep up with fork and tire evolutions.

“Feedback from exhibitors and retailers about the new facility was very positive,” said Interbike Communications and PR Director Justin Gottlieb. “One retailer told me that the new floor plan forced him to bump into exhibitors that he might have avoided at the Sands  simply because he had a routine and knew what booths to go to. He said he actually did business with some of them as well. We also received good feedback on The Paddock, as it gave a new outdoor element to the show, complete with a test track that was better than in years’ past.”

Most agree that Interbike, no matter where it takes place, is more of an industry experience than a trade show, featuring internationally sanctioned bike races, retail education events, media events and the world’s largest two-day “OutDoor Demo.” More food trucks, events and expanded vendor booths made for a great second day at the demo.

“Negative comments were centered around the long lines at restaurants in the morning, and lack of grab-and-go food. This is something that will be fixed for 2014,” said Gottlieb. “Additionally, we heard that some attendees had trouble navigating the expo hall  but that’s to be understood with a new location and floor plan. This too will get better moving forward.”

Street signs on aisles and segmented “neighborhoods,” as well as a highly functional app, helped show-goers navigate the new digs. Despite the long lines typical of Vegas hotels and the desert heat, overall floor vibes were overwhelmingly positive. In fact, the slow start to the 2013 bicycle retail sales season due to a cool, wet spring didn't seem to dampen spirits what so ever, and most surveyed agreed the industry had snapped back during the summer months.

Interviews with a wide range of retailers and exhibitors indicated the show remains very relevant and important to the industry, although like its sister show Outdoor Retailer, it is more about face time and looking for new products than writing orders. Also, while the timing of the show in-season may not be ideal, there isn't necessarily a better time to hold it.

“We had everything pretty much lined up before the show” said Ryan Campo, buyer for Criterium Bike Shop in Colorado Springs, CO, which sent four employees to Interbike. “We sat down with a few reps to finalize Spring '14; with maybe 30 percent of our time booked with appointments, but mostly we were cruising, looking for new things. We're looking for lifestyle stuff to jazz up the store for the holiday season.”

Fitzgerald said the show always helps him get a sense for where the industry is headed and right now he sees the affects of consolidation trickling down to retailers.

“With the continued consolidation of the industry, there are fewer buyer dollars to spread around,” said Fitzgerald, who opened his Idaho store last year, 10 years after opening his original store in Jackson Hole. “The more shops align themselves with bigger brands, there's a commitment to that brand that goes into a lot of categories, and that's going to eat up a lot of buying dollars.”

Established in 1982, Interbike is the largest bicycle trade event in North America, second only to Eurobike in international scale, bringing together manufacturers, retailers, industry advocates and media to conduct the business of cycling. 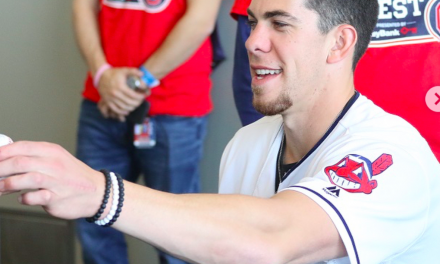 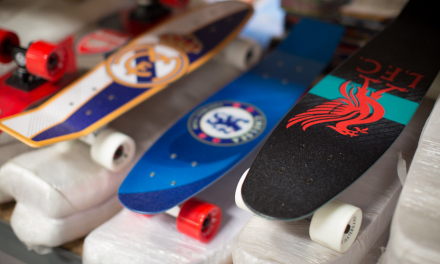 Aluminati Skateboards Joins 1% For The Planet