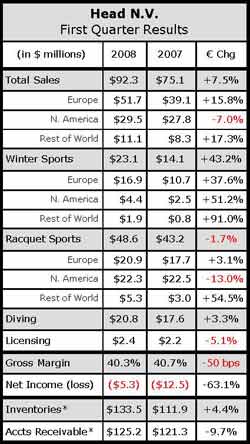 quarter as its winter sports business comped against the extremely small first quarter 2007. Though winter sports sales increased, the first quarter saw racquet sales decline in this, its seasonally strongest period. Diving revenues increased, which combined with the strong winter comp to more than offset the racquet decline. The company also got a boost on the bottom line from a stock-based compensation income of 3.6 million compared to a charge of 1.3 million in the year-ago period. Excluding those effects, the companys net loss still shrank 0.6 million for the first quarter.


The company did feel the effects of the continued weakness of the U.S. dollar, but failed to give specific details. Management did mention, however, that revenues in the U.S. decreased from 37% of net sales for the year-ago quarter to 32% this year, due predominantly to the weakening of the U.S. dollar compared to the euro.

Racquet Sports revenues for the three months ended March 31, 2008 decreased 1.7%, to 32.4 million from 33.0 million in the comparable 2007 period. This decrease was due the strengthening of the euro against the U.S. dollar in the reporting period partially offset by higher sales volumes of tennis racquets and sales from the companys newly introduced tennis footwear.

In terms of quantities sold during the first quarter for 2007, tennis racquet sales were up from 495,000 units to 524,000 units. Tennis balls remained flat at 1.6 million dozen. In 2008, the company is currently estimating the global market in racquets will decline slightly compared to 2007.

Though the weakened dollar negatively affected sales, it had the opposite effect on margins, pushing segment gross margins up 160 basis points to 43.4% of net sales from 41.8% for the year-ago quarter.

Winter Sports revenues for the quarter increased 43.2% mainly due to low pre-season orders in 2007 after the poor '06/'07 season resulting in low stock held by the retailers at the beginning of 2008, which subsequently resulted in higher new orders in the first quarter. The growth is not indicative of the full-year results as these relate to the 2007 and 2008 season rather than the '08/'09 season, which will account for a vast majority of the companys sales this year.

Diving revenues increased 3.3% for the first quarter, mainly driven by the introduction of new advanced products, but negatively affected by the strengthening of the euro against the U.S. dollar. Gross margin declined in Diving also due to weakening of the U.S. dollar against the euro as the majority of the companys manufacturing costs for this unit are based in Europe.

Licensing revenues for the first quarter decreased 5.1%, to 1.6 million from 1.7 million in the comparable 2007 period due to fewer licensing agreements.

The company reported that its 40 basis point decline in gross margin for the quarter was a result of increased raw material prices. Expenses grew for the quarter, mainly due to higher advertising costs associated with the companys revamped ski racing team.