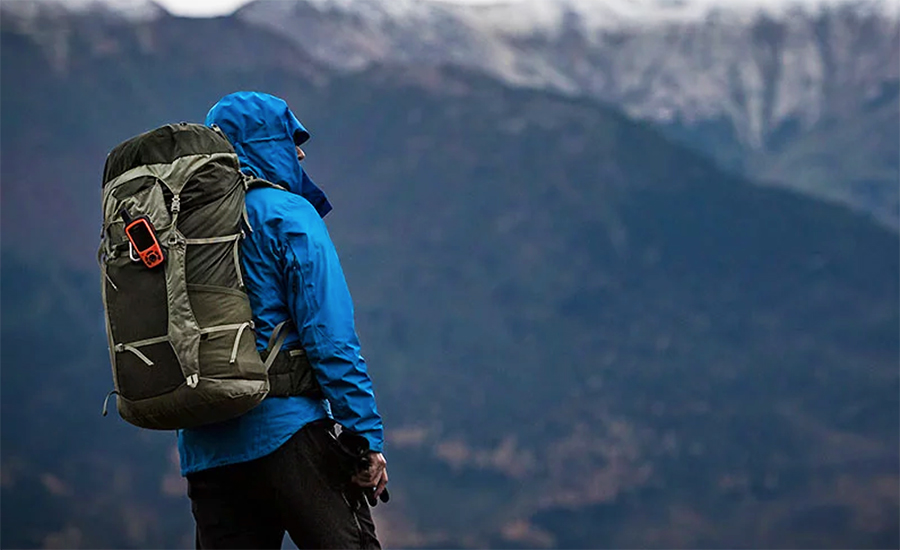 Highlights for the second quarter of 2019 include:

“We achieved record second-quarter revenue and profits with three of our five segments delivering strong double-digit revenue growth rates,” said Cliff Pemble, president and chief executive officer of Garmin Ltd. “We are very pleased with the results we have delivered thus far, giving us the confidence to raise our full-year 2019 revenue and EPS guidance.”

Revenue in the aviation segment grew 20 percent in the quarter with contributions from both the aftermarket and OEM categories. Gross and operating margins came in at 75 percent and 36 percent, respectively, resulting in 27 percent operating income growth. Aftermarket systems and ADS-B solutions contributed to positive results and Garmin said it continues to capitalize on ADS-B opportunities ahead of the December 31, 2019 mandate deadline. During the quarter, Garmin said it achieved certification of the G5000® integrated flight deck for the Citation Excel and XLS, bringing modernization to this family of aircraft. Garmin recently announced the availability of the G1000® NXi integrated flight deck retrofit for additional aircraft models and continue to see strong customer demand and appreciation for this upgrade program.

Revenue from the marine segment grew 13 percent in the quarter, driven by strong demand for its chart plotters and Panoptix LiveScope sonars. Gross and operating margins improved to 61 percent and 28 percent, respectively, resulting in strong operating income growth. Fusion, a Garmin brand and worldwide leader in marine entertainment, was selected by Independent Boat Builders, Inc. to supply audio entertainment to their 19-member network. Garmin said it recently announced its entry into the freshwater trolling motor market with Force. This quiet, powerful and efficient trolling motor has quickly earned accolades in the industry, winning the coveted Best of Show at the recent ICAST, sportfishing trade show.

Revenue from the fitness segment grew 12 percent in the quarter driven by strength in running and contributions from Tacx, its recent acquisition. Gross and operating margins were 54 percent and 20 percent, respectively. During the quarter Garmin said it began shipping the Tacx cycling and accessory products, strengthening its cycling portfolio. Tacx® smart trainers provide a highly realistic ride simulation allowing riders to continue their training regardless of the weather conditions. Garmin said it also launched its refreshed line of Forerunners, providing both smartwatch features and enhanced running dynamics for all runners.

Revenue from the outdoor segment grew 4 percent in the quarter with growth driven by its golf and inReach product offerings. Gross and operating margins remained strong at 64 percent and 34 percent, respectively. During the quarter, Garmin began shipping the MARQ luxury watch. In addition, Garmin experienced strong demand for golf wearables and the Instinct adventure watch. Garmin also refreshed several of its handheld offerings, including the new GPSMAP 66i, combining Garmin’s GPS capability with inReach satellite communication capabilities.

The auto segment declined 13 percent in the quarter, due to the ongoing PND market contraction. Gross and operating margins improved to 48 percent and 16 percent, respectively. During the quarter, Garmin announced the Garmin Overlander, an all-terrain GPS navigator specifically designed to fit the needs of the growing overlanding community. Garmin also announced the DriveSmart 65 with built-in Alexa personal assistant, bringing easy voice-controlled functionality to drivers, and the RV785, with a built-in dash cam to record and save the video.

The effective tax rate in the second quarter of 2019 was 18.9 percent compared to 19.4 percent in the prior-year quarter.

In the second quarter of 2019, Garmin generated $80 million of free cash flow (see chart below for a reconciliation of this non-GAAP measure). Garmin continued to return cash to shareholders with its quarterly dividend of approximately $108 million. Garmin ended the quarter with cash and marketable securities of approximately $2.4 billion. 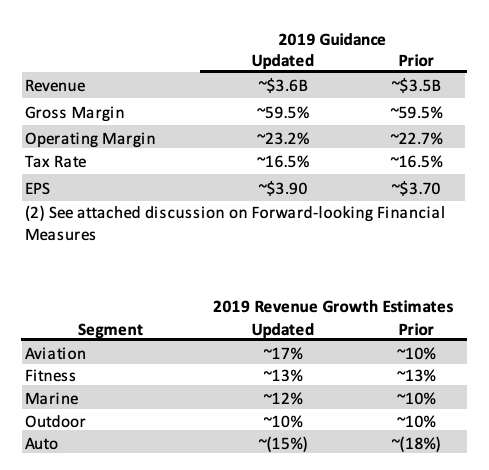 Based on the strong performance in the first half of 2019, Garmin is updating its full-year guidance. Garmin now anticipates revenue of approximately $3.6 billion driven by higher expectations for its aviation, marine and auto segments. Garmin said its outlook for the fitness and outdoor segments is unchanged. Garmin said it anticipates its full-year pro forma EPS will be approximately $3.90 based on a gross margin of about 59.5 percent, operating margin of about 23.2 percent and an unchanged full-year pro forma effective tax rate of about 16.5 percent.