The U.S. Fish and Wildlife Service has released its preliminary duck population report for May and early June. Total duck populations were estimated at 45.6 million breeding ducks on the surveyed area. This estimate represents an 11 percent increase over last year’s estimate of 40.9 million birds and is 35 percent above the 1955-2010 long-term average. This was only the fifth time in the survey’s history that the total duck population exceeded 40 million. 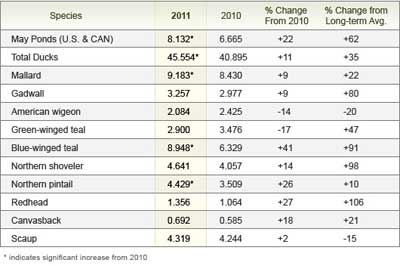 Habitat conditions across the U.S. and Canadian prairies and parklands were considered excellent. Further north, wetland conditions in most boreal regions of Alaska and northern Canada were good to very good at the time of the survey. During the survey and into early summer, many regions important to breeding ducks continued to receive significant snow melt and further precipitation, which could increase later breeding efforts and ensure brood survival. If these wet conditions continue, prospects going into the winter and possibly into spring 2012 will be favorable as well.

In addition to extensive grassland cover, one of the most important elements in duck breeding success is the amount of water present in portions of prairie and parkland Canada and the north-central United States. Total pond counts for the United States and Canada combined showed 8.1 million ponds, a 22 percent increase from last year’s estimate and 62 percent above the long-term average. This was the second time in the survey’s history that ponds exceeded 8 million.

Of the 10 species traditionally reported, eight were similar to or increased in number from 2010. Two species (scaup and American wigeon) remained below their long-term average. Northern shovelers, blue-winged teal and northern pintails were bright spots on this year’s survey. Northern shovelers and bluewings reached record highs (4.6 and 8.9 million, respectively), and northern pintail numbers surpassed 4 million for the first time since 1980. Scaup numbers were similar to 2010 and remain below their long-term averages. Only three species-scaup, northern pintail and American wigeon-remain below North American Waterfowl Management Plan population goals.

“This year I am reminded again of what happens when survey timing, habitat conditions, populations and weather line up to produce a really favorable report,” said Humburg.

“As a waterfowler, Im optimistic about today’s report. However, unprecedented water conditions are only part of the story. Water without nesting cover does little to improve the future of waterfowl,” said Ducks Unlimited’s CEO Dale Hall. “As good as the news is this week, waterfowl and prairie habitats continue to face significant long-term threats. Grassland habitat is under siege on many fronts and is being lost at alarming rates. Key public policies such as the Farm Bill and North American Wetlands Conservation Act will need to continue to focus on conservation for the good news to carry into the future. That’s our challenge in years to come.”

Nesting cover across the Prairie Pothole Region continues to decline, particularly on the U.S. side of the border. During the survey, observers noted many large tracts of former Conservation Reserve Program grasslands that had been converted to cropland since last year or were in the process of being plowed. Expiring CRP contracts and high commodity prices driven by biofuel demands and other economic factors are pushing these conversions. North Dakota alone has lost 22% of its CRP acres since 2007. Experts project that another 387,000 acres will be lost in 2010-2011 and more than 1 million acres will be lost in 2012-13. The continued loss of critical nesting cover will negatively impact the future of breeding ducks.

As always, fall weather and habitat conditions along migration routes will have a big impact on migration chronology and local hunting success.

“I encourage everyone to celebrate this year’s good news as we recommit to the long-term conservation of waterfowl and waterfowl habitat,” said Humburg. “In light of a very favorable breeding ground report, it’s still quite a while before we can put out the decoys. We will have to monitor how broods fare this summer and what impact summer flooding has on many migration and wintering areas before we get better insight into what to expect this fall.”

The FWS spring surveys provide the scientific basis for many management programs across the continent including the setting of hunting regulations. The four Flyway Councils will meet in late July to recommend and adopt the season structure and bag limits for 2011-12. Individual states will make their specific selections within a federal framework of season length, bag limit, and outside dates. Hunters should check their state’s rules for final dates.

NRF: Retail sales up in Aug. for First Time in Six Months