Freedom Group, the parent of Remington, reported a loss of $6.4 million in the third quarter ended Sept. 28, against earnings of $30.6 million a year earlier.

Sales slid 27.1 percent to $253.6 million from $347.1 million a year ago, according to a filing with the Securities & Exchange Commission.

Firearms sales fell 32.1 percent to $133.1 million. Declines were seen across all major product categories. MSR and centerfire sales decreased $66.5 million and sales of handguns declined $9.2 million. In addition, sales of shotguns decreased $4.5 million while sales of rimfire rifles slid $3.4 million. These decreases were partially offset by increases in sales of its other firearms products, firearms parts and services of $19.9 million.

The firearms declines in the quarter and nine months reflect the return of sales to more normalized levels, especially for MSR, handguns and centerfire rifles, Freedom Group said.

Concerns over more restrictive government legislation contributed to strong demand for firearms in 2013. Firearms sales also declined this year due to the fact that Freedom Group temporarily ceased production and sales of its Remington Model 700 during the second and third quarter of this year, while focusing on a product safety recall. In addition, due to the focus on the product safety recall, many of its new product introductions were delayed. Sales of its Remington Model 700 resumed at the beginning of the fourth quarter.

Gross margins in the quarter eroded to 16.7 percent from 36.2 percent due to lower sales lower sales volumes of $ 21.3 million, higher manufacturing costs of $10.7 million (which include d $ 3.0 million of restructuring and start-up costs related to the vertical integration and shift of operations to Huntsville, AL), an unfavorable sales mix of $ 8.5 million and unfavorable pricing of $8.2 million.

Selling, general and administrative expenses decreased $6.1 million, or 11.1 percent, primarily due to lower variable incentive compensation expense of $9.4 million, lower legal expense of $1.4 million and lower variable distribution and commissions expenses of $0.6 million. These decreases were partially offset by higher salaries and benefits of $1.7 million and restructuring and start-up costs due to the vertical integration a and shift of operations to Huntsville of $3.7 million 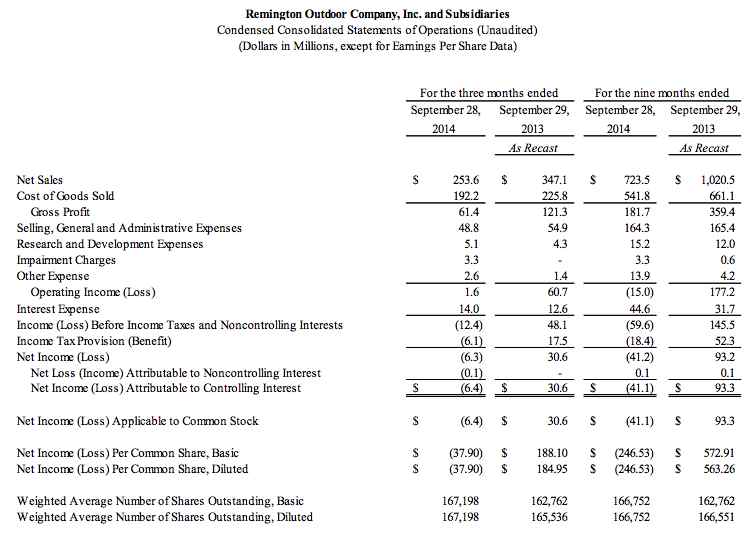