The Forzani Group Ltd. net earnings for the second quarter were $5.4 million, or 16 cents per share, compared to the prior year's second quarter of $1.9 million, or six cents per share. Retail system sales for the quarter were $351.3 million, an increase of
$13.4 million, or 4.0% from the comparable 13-week sales of $337.9
million. Same store sales in corporate locations were up 0.4% and increased 6.1%
in franchise locations, over the fiscal 2007 second quarter, for an
overall same store sales increase of 2.5%. These results were on top of
prior year same store increases of 5.4% and 6.9% respectively in
Corporate and Franchise businesses.

Combined gross margin for the 13 weeks ended July 29, 2007 was 34.9% of revenue, or $102.1 million, compared to 34.0%, or $96.7 million in the previous year. Both retail and wholesale margins improved over the prior year. The margin dollar improvements continue to be driven by a combination of solid franchise results, and improved corporate store results. Gross margin improvements were seen in most categories, in particular team sports, hockey, camping and inline hardgoods lines, athletic and licensed clothing and outerwear.

General and administrative expenses were 7.6% of total revenue versus the prior year's 8.3%. The absolute dollar decrease of $1.4 million was a combination of standard year over year increases, offset by reduced accruals for performance-based compensation and reduced advertising expenses.

Earnings before interest, taxes and amortization (“EBITA”) were $20.9 million, compared to $16.1 million for the 13-week period last year.

During the quarter, the Company opened 2 Sport Chek, 2 Coast Mountain Sports and 1 Golf Experts stores and converted 2 Sport Mart stores to corporate Hockey Experts locations. In the franchise division, 5 stores were opened (3 Nevada Bob's Golf, 1 Fitness Source and 1 Buying Member). As a result, at the end of the second quarter, the Company had 260 corporate stores and 228 franchise locations. This was a net increase of 86,923 square feet of retail selling space, a 1.5% increase versus the previous quarter. The Company now has 488 stores from coast to coast (July 30, 2006 – 470 stores).

Store operating expenses, as a percent of corporate revenue, were 28.7% versus 28.4% in the prior year. General and administrative expenses were 8.2% of total revenue, up from 7.7% in the prior year. The absolute dollar increase of $5.1 million was a combination of the timing of accruals for performance-based compensation ($4.1 million), and standard year over year increases. As discussed in our first quarter press release, management is of the opinion that performance targets will be attained in fiscal 2008 and has accrued compensation expenses accordingly. Year over year performance-based compensation is expected to be approximately $10 million less in fiscal 2008 versus fiscal 2007 resulting in an annualized general and administrative expense run rate in line with historical levels.

Net earnings were $6.2 million versus $2.2 million in the prior year. Net earnings in the current year include the effect of a one-time loss of $0.9 million on the sale of an investment in a trademark licensing company.

The Company's working capital of $127.5 million grew by 12.0% over the prior year due to the stronger results and in spite of a $49.4 million reclassification of long-term debt to current debt, reflecting the maturity, in the coming twelve months, of the Company's net term debt with its lender. The company has no exposure to recent market concerns in respect of asset-backed commercial paper as it is neither an investor in, nor issuer of this financing vehicle.

The improved results that the Company is generating have continued due to strong growth in the Wholesale division and improved Retail profitability as a result of expense controls and improved margins, driven by the Precision Retailing initiative in the Sport Chek and Coast Mountain banners. EBITA, on a trailing four-quarter basis, was $113.8 million compared to $89.4 million for the four quarters ending in the second quarter of last year, a 27.2% improvement.

As in the prior two years, the Back to School selling period has shifted to the latter half of August and the first half of September and the Company has adjusted its advertising spend to coincide with this shift. The Company will be releasing its Back to School results at the end of September. 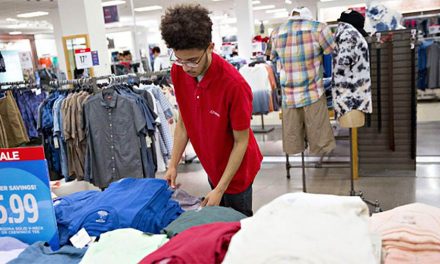 JCPenney To Cut Jobs In Restructuring