Steve Block, president and one of the founders of SPRI® Products, a leading distributor of rubber resistance exercise products and fitness accessories, passed away December 30, 2004, at the age of 68 after suffering a cerebral hemorrhage. Block was laid to rest by his family and friends on January 2, 2005.

Steves tragic death has shocked and saddened all who knew him. He will be sorely missed by his family, partners, management team, staff and the entire fitness industry.

“SPRI® and the fitness industry have lost one of its leaders this past week,” says Scott Swanson, a SPRI® Products partner. “I personally have lost a lifelong friend who has stamped his mark on my soul.”

For more than 20 years, Block played an instrumental role in establishing SPRI® Products as the pioneer and leader in the rubber resistance category and helped to popularize rubberized resistance exercise in clubs, personal training studios and consumers homes across the country.

In addition to the companys leadership in the professional market, Block also helped pave the way for SPRI® to expand into the consumer market by bringing packaged solutions to retail stores and to consumers who seek professional, gym-quality workouts at home, and will continue to do so in the years to come.

“SPRI® will continue to conduct business under the Steve Block philosophy of building great relationships with our business partners. His untimely death will be felt not only at SPRI® but throughout the fitness industry,” says Swanson.

Blocks passion for fitness and the industry helped make him much more than a president and leader by title, but someone who was truly involved with his customers and interested in bringing new solutions to the fitness market. A fixture at industry tradeshows, Block could always be seen interacting with customers and colleagues.

“Life at trade shows will never be the same without Steve strolling from booth to booth, shaking hands, giving out hugs and having a kind word for everyone,” says Swanson.

In tribute to the companys past president, SPRI®, under the leadership of partner Scott Swanson, Chief Operating Officer Herb Flentye and the rest of the management team, pledges to keep Steves passion for fitness alive by maintaining the standards for quality and excellence that Steve helped to make synonymous with the SPRI® name. SPRIs management team will also continue to support and improve the fitness world in the tradition Steve spearheaded for more than 20 years.

“I have had the privilege of working closely with Steve Block for the last five years,” explains Flentye. “I have grown to admire and embrace the traits that made Steve special to us all. His passion for fitness, his love for the industry, and his admiration and respect for the people in it are things I will carry with me always.”

Blocks partners and management team will also continue to run the company with Steves signature leadership style, treating associates as friends and keeping the vision for continuous improvement in the fitness industry and the workplace alive.

“Steve excelled in bringing people together. He was a matchmaker with an eye for the big picture.” says Greg Niederlander, Director of Education for SPRI® Products.

“Steve was one of the most decent, caring, and loyal human beings I have had the pleasure of knowing. Part father figure, part older brother and a whole lot of friend. He will be remembered as a gentle giant who did not separate his friendships from his business life or his family life,” continues Niederlander. “They all mended into one and he treated friends, family and business acquaintances the same way: with care, love and devotion.”

Steve Block will be fondly remembered for his contributions to his company, his customers, and the fitness industry as a whole.

The Block family has expressed that memorials in Steves memory to the U.S. Holocaust Museum, 100 Raoul Wallenberg Place SW, Washington, D.C. 20024, would be appreciated. 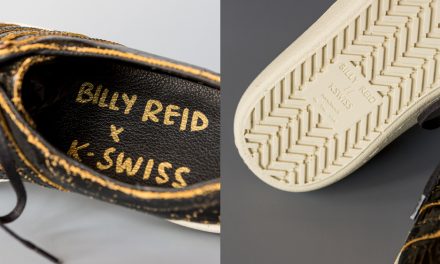 Made In The USA: K-Swiss x Billy Reid