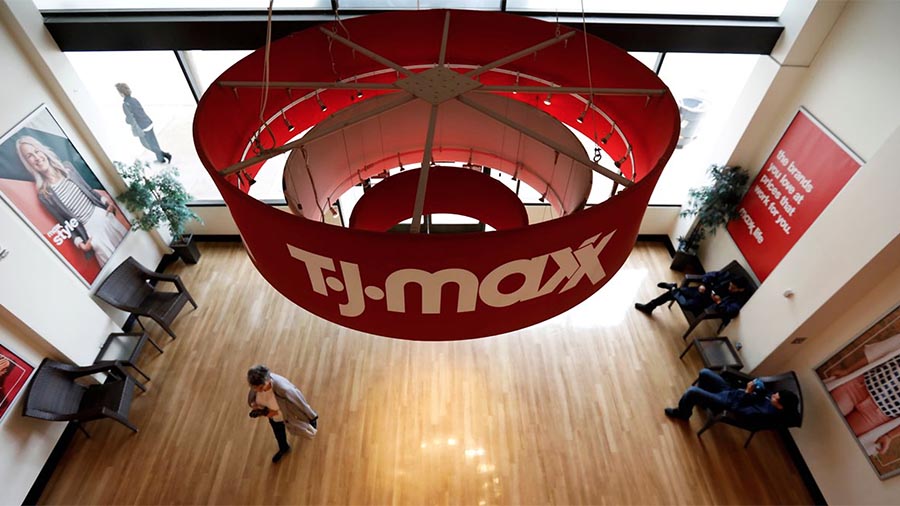 The TJX Cos., Inc. reported its overall apparel business at Marmaxx was slightly positive every month during the second quarter, but overall, U.S. comps were down 5 percent due to a steep decline in the home category.

The parent of T.J. Maxx and Marshalls increased its full-year pretax profit margin outlook but lowered its sales and EPS guidance.

Profits in the quarter rose 3.0 percent to $809.3 million, or 69 cents per share, reaching the high-end of company guidance in the range of 65 to 69 cents. The year-ago period included a debt extinguishment charge of 15 cents per share.

“I am very pleased with our second quarter pretax profit margin, which was above our plan and our earnings per share, which are at the high end of our plan,” said Ernie Herrman, CEO, on a call with analysts. “This is despite U.S. comp sales coming in lighter than we expected as we believe historically high inflation impacted consumer discretionary spending. We achieved strong profitability through better-than-expected merchandise margin and disciplined expense management.”

Herrman credited his merchant team’s knack for “buying the right merchandise in the right categories” and TJX’s banners’ value proposition.

“As we enter the second half of the year, we see the flexibility of our business and our value proposition as key advantages in the current retail landscape,” said Herrman. “While we’re not immune to macro factors, over our 46-year history, the flexibility of our off-price model and our commitment to value have served us very well in different macro environments. We attract a wide range of customers, which we believe is a key advantage in today’s environment. Long term, we remain very confident in our plans to capture market share and improve the profitability profile of TJX.”

Scott Goldenberg, senior EVP and CFO, said, “We are very pleased with our strong flow through, despite our softer sales. Our pretax margin outperformance was primarily driven by merchandise margin and effective expense management, which were both better than we planned.”

Gross margins were 27.6 percent, a 1.8 percentage point decrease versus the prior year. SG&A costs as a percent of sales were 18.4 percent, flat versus the second quarter of Fiscal 2022.

The company’s U.S. comparable store sales decline of 5 percent went against a 21 percent gain in the year-ago quarter.

For the second quarter, the U.S. average basket was up, driven by a higher average ticket, and U.S. customer traffic was down.

Internationally, the second-quarter segment profit margin at TJX Canada of 15.8 percent exceeded their pre-COVID Q2 fiscal ’20 level. Overall sales increased 22 percent and benefited from having stores open all quarter this year. On a constant currency basis, TJX Canada sales were up 28 percent in the second quarter.

Inventories as of July 30 were $7.1 billion, up 39.2 percent compared with $5.1 billion at the end of the year-ago second quarter. Consolidated inventories on a per-store basis, including the distribution centers, but excluding inventory in transit, the company’s e-commerce sites and Sierra stores, were up 33 percent on a reported basis (up 35 percent on a constant-currency basis). Goldenberg said, “We are very comfortable with our balance sheet and store inventory levels. Importantly, overall store inventory turns are better than our pre-pandemic levels.”

Looking to the back half, Herrman was upbeat about the company’s merchandising plans. The CEO said, “We will flow eclectic assortments to our stores and online multiple times weekly. This strategy has worked well for many years and sets us apart from other retailers during the busy holiday season as shoppers can see something new every time they visit us. We are confident that we can execute on our merchandising initiatives and manage our supply chain to keep our shelves fully stocked.”

He added that the availability of merchandise across good, better, and best brands “is exceptional. We have plenty of open-to-buy.” Banners have also “sharpened” their messaging around value to drive traffic.
“In an environment where consumer wallets are stretched, we believe it is as important as ever to amplify our value messaging across television, digital and social media platforms,” said Herrman. “I also want to highlight that our customer satisfaction scores remain very strong. Further, we continue to attract a significant number of millennial and Gen Z shoppers, which we believe bodes well for the future.”

Regarding profitability, Herrman said the company is “extremely pleased” that it was able to increase our full-year pretax margin guidance in this environment. Said Herrman, “The buying environment is very attractive, and we believe we can continue to benefit from buying better. Further, our pricing initiative is working very well. Our teams have done an outstanding job implementing this initiative over the past year, and we are very pleased that our value perception scores remain very strong.”

This lower sales guidance reflects the flow-through of the second quarter U.S. comp shortfall and reduced expectations for the second half.

The improved profitability outlook versus prior guidelines is due to stronger merchandise margin, better expense management and less incremental freight and wage pressure expected in the second half.
Adjustments exclude the negative impact from the first quarter charge related to a write-down of the company’s minority investment in Familia, the Russia-based off-pricer.

For the third quarter, TJX expects pretax profit margin to be 10.1 percent to 10.4 percent and EPS in the range of 77 cents to 81 cents. U.S. comparable store sales are expected to decrease 3 percent to 5 percent versus a 16 percent U.S. open-only comp store sales increase in the year-ago third quarter.